Die-hard survival-horror fans might possibly get a quick fix from this game, but even that's questionable.

If great games were made of things like a mediocre story, oddly conical character shadows, and lead characters whose eerie grins just won't go away, The Ring would be a real winner. Alas, these are not the criteria by which we judge, and thus the game is hardly what you would call "great." In fact, it's far from it.

The Ring is loosely based on a Japanese movie of the same name, in which a cursed strip of 8mm film dooms anyone who views it to a seven-day-long death sentence. Yes, it's hokey. The game version of The Ring supplants this film with a computer program that, when booted, has basically the same effect. Yes, this is even worse. You play as CDC researcher Meg Rainman, whose boyfriend Robert recently died of unexplained causes. Meg boots up Robert's laptop and, surprise, encounters a program that displays only the word "ring." Doing so introduces Meg to a sort of dark alternate dimension, and she finds herself wearing soldier's gear, armed with a pistol. After she escapes this reality, a sudden phone call informs her that she'll be dead in seven days. Your subsequent duty is, of course, to unravel the mystery of the Ring and save Meg's life.

The Ring really wants to be Resident Evil, but then, so do a lot of games - and none of them (with the possible exception of Dino Crisis) has succeeded yet. The crux of this matter is that Resident Evil is already fundamentally flawed. Survival-horror games in general are plagued by awkward control problems, camera angles that obscure the action, and arbitrary puzzles like "pull the statue's earlobe to unlock the secret door." However, Resident Evil consistently succeeds with its wonderful sense of ambience, great story, and the endearing charm of its characters. The Ring has none of this. Its story is bland and often inexplicable, its characters are flat, and the only atmosphere it creates is one of sheer cheese.

Gameplay in The Ring is nothing new to survival-horror fans - movement, combat, mapping, and inventory are all identical to Resident Evil or any of its clones. This doesn't mean the game actually plays as well, though. The controls are stiff even for this type of game, and collision detection is often clumsy, occasionally requiring you to circumvent what looks like an otherwise passable walkway. These technical issues make getting around something of a chore, since the game is heavily based on exploration. Triggering a new event or story sequence is often dependent on being in the right room at the right time, and clues are rarely given about exactly what room that is. This leads to a fair amount of aimless wandering between some amazingly similar environments.

There are a handful of other problems with The Ring. Its translation isn't great, or even good - just serviceable. Dialogue sounds stilted and unnatural, and the text is rife with typos. The voice acting is so hilariously bad it's almost unbearable, but fortunately it's used sparingly. Some (but admittedly not all) of The Ring's music is an aural horror to behold - the looping first track is so grating that you might even compulsively turn the audio off (as this reviewer eventually did). And finally, the question must be asked: What's with that smile? Regardless of the situation, Meg wears a disturbing, Jokeresque leer throughout every scene of the game. Her boyfriend died the day before? She's all smiles. She's faced with a slobbering apelike creature? Big dopey grin. It's kind of disturbing.

It'd be easy to finish this review by saying that The Ring was a noble concept whose execution was flawed, but that's really not the case. It's yet another rehash of a tired gameplay concept, and the same has been done a lot better before. Die-hard survival-horror fans might possibly get a quick fix from this game, but even that's questionable. You'd really be better off playing through Code Veronica again. 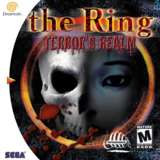