The Pedestrian Review - Walk Before You Run

It’s human nature to be curious about what seemingly mundane and inanimate things get up to while we’re not looking. Such thinking spawned mythos like fairies in people’s gardens, borrowers, and the Toy Story saga, and now we come to street signs. What do those little human figures get up to when no-one is around? If The Pedestrian is to be believed, the answer is 2D platforming, solving lots and lots of puzzles, and taking control of electrical devices in an attempt to escape their confines.

In taking control of a human figure (either with or without a dress) your adventure in The Pedestrian is mostly confined to various street signs, blueprints, and other 2D surfaces. In the background, blurred into obscurity, are the beautiful 3D landscapes of the world they exist in. You can run, jump, and climb with light platforming maneuvers to get to new areas, but the crux of The Pedestrian's puzzling comes from the ability to zoom out and rearrange the positions of the 2D signs and flat surfaces, creating doorways and new paths. Once you regain control of the person symbol, you can then use these new doorways to access the other signs to complete puzzles and move forward. Rearranging the playing field adds a layer of complexity that will have you thinking about obstacles in two different ways for the majority of the experience.

There’s a satisfaction in ordering the panels of a level in your own way, which then allows you to jump back in and complete the puzzle. The process is not totally freeform, as doors and ladders on one panel will only connect to those on another if they are properly aligned, and there are often obstacles in the way that might impede a certain way of doing things. However, there's definitely a very godlike feel to the control it gives you. Occasionally my solutions felt so chaotic that I wondered if they were the intended direction; other times the puzzles felt intentionally crafted to lead me to certain results. But there is overall a nice feeling that you are figuring out things on your own, in your own way.

Extra difficulty lies in the fact that you can’t make most changes to the arrangement of your 2D platforming world without resetting other things--activated switches will deactivate, and key items will be lost, so you need to go in with a plan. Sometimes resetting is necessary, especially if you hit a dead-end, but later you'll be able to freeze some signs to prevent them from resetting, keeping the elements there active for your next attempt. The concept moves you to start thinking about puzzles in a way that's almost akin to time travel. Having to manage a puzzle board full of different segments filled with switches, keys, and laser beams, among other things, and then literally having to manage time and space to reach a goal provides some surprisingly challenging and satisfying scenarios.

The Pedestrian serves out these scenarios in bite-sized pieces. Even when presented with a larger puzzle, it’s still broken down into several smaller sections, which certainly makes them easier to comprehend. However, because of this structure, The Pedestrian can begin to feel a little too samey, especially when the reward for completing a puzzle is almost always more puzzles. It works very well as a game to spend half an hour with and then return to later, rather than slog out the whole four-hour duration in one unending sign barrage. I’d often find myself leaving it due to puzzle fatigue or being a little stuck, then come back to it later with renewed inspiration to immediately solve the troublesome puzzle, ready for a little more.

The introduction of new concepts and escalation in difficulty are gently paced, and only when new elements are first added does it really ever feel daunting--some of the puzzles I spent the longest on were just working out exactly how a new mechanic worked or could be used since the game doesn’t often provide much direction. Instead, the Pedestrian then gives you plenty of opportunities to explore and understand new features in subsequent levels and encourages you to work things out for yourself. The initial frustration is always made up for by the enhanced understanding and satisfaction of working it out on your own. It also ensured I completely grasped all the concepts, which allowed me to then solve increasingly difficult puzzles I’m sure I would have been stumped by otherwise. The payoff for making me feel stupid for one puzzle allowed me to feel incredibly smart for many other harder challenges.

There’s a real freshness to The Pedestrian's take on puzzle-platforming and world manipulation. The constant introduction of new, sometimes surprisingly complex ideas means there’s enough to keep you moving through the nicely segmented challenges. The levels themselves can be quite repetitive in both look and feel, making the game tiresome during long play sessions, but it lends itself well to short-burst experiences and never lets you feel too lost. The Pedestrian executes its charming premise well, with just enough complexity to keep your brain pleasantly stimulated. 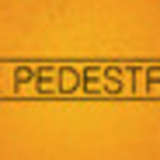 Hope’s adventures on flat surfaces caused her to think in ways she didn’t expect, which is one of her favourite things about puzzle games. She spent a total of 4 hours making her way from sign to sign over the course of 6 play sessions.