If you mixed the ship-to-ship deep-space dogfighting of real-time strategy games like Homeworld with the action-packed combat and base building of games like Command & Conquer along with some funky watercolor background art, you'd get The Outforce from Strategy First and developer O3 Games. The Outforce is a convention real-time strategy game with fully 3D graphics that's fairly well done but generally unspectacular--while it has its good points, its overall lack of original features or design elements is unlikely to leave a lasting impression on real-time strategy players.

The game focuses on outer-space combat between three species, which are basic science-fiction archetypes for futuristic humans, robots, and aliens, respectively. The game starts out when a giant space station mysteriously vanishes. This station is home to the droidlike Crions and the turtlelike Gobins, who are in the midst of ongoing peace negotiations. The humans send a probe ship to investigate, and that disappears as well. So they send you in to build a base, locate the ship, and find out what's happening.

What ensues is typical of the real-time strategy genre. Most missions begin with your having to quickly assemble a base and resource-gathering infrastructure. Then you need to build a task force of some kind and go find the bad guys.

The look and style of the game is much more noteworthy than the actual mechanics. The Outforce has fully 3D graphics, but, as in most real-time strategy games, it has a fixed overhead perspective. The units are all fully polygonal shapes, and, for the most part, the units look great and show a high level of detail. You can see little rotating lights on some of the vessels, and the weapon effects are generally also very detailed.

According to The Outforce, outer space is a colorful place, filled with swirling watercolor images. It may not be the most convincing depiction of outer space, but it looks great in the game and doesn't seem inappropriate. Rotating planets in the distance spice up some of the missions, along with asteroid fields and other floating objects. All combined, the graphical elements of The Outforce are the game's strongest asset.

The gameplay in The Outforce is solid, though not particularly unusual. Some of the twists include your ability to construct towships, which play a critical role in some missions because of their ability to drag objects back to your base. The physics of the towships are rather impressive, as the mass of the object in tow will noticeably have an effect on how quickly the towship can move it. The Outforce also offers several useful but fairly standard gameplay features, such as the ability to set waypoints and repair and build queues. Unfortunately, no formation options are available.

The lack of formations is compounded by the game's problems with unit movement and pathfinding. All of your selected units move in tight clusters. Unlike in Homeworld, which lets you assign formations for moving and fighting, units in The Outforce just shuffle toward their destination without spacing themselves out. This can make it tough to select units by type, since large units sometimes completely cover smaller ones. And this haphazard movement also simply looks bad, particularly in contrast with the game's otherwise stylish presentation.

The common presence of outer-space obstacles, which limit your movement options, is also frustrating. Certainly, the game doesn't need to have the same exact sense of expansiveness as in Homeworld--but it's still supposed to be in space. So why is it that small fighters cannot fly over or under floating space walls or the various buildings scattered around each base? By channeling you through very specific--and often very narrow--movement corridors, The Outforce defeats the purpose of its setting and its 3D engine in most missions. You'll quickly get used to it if you've played any real-time strategy game that takes place on the ground, but then you'll realize that the game's setting is extraneous.

Even so, The Outforce has its moments. The three different sides are fairly distinctive, the game looks good, and the techno/new-age soundtrack is also very good and appropriate to the setting. And so, even in spite of some of its problems and its overall lack of original ideas, the game itself can be quite fun--the multiplayer battles are particularly enjoyable and fast paced. Furthermore, the game is available for a low suggested retail price of around $20. The Outforce won't wow real-time strategy players, but it's a solid space-based strategy game with good production values. 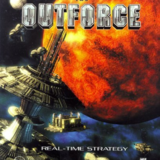