It is evident from the onset that The Messenger is heavily influenced--aesthetically and mechanically--by the classic Ninja Gaiden series. But it's also quickly evident that the game doesn't just wear its influences on its sleeve, it also brings a brilliant new take on the action-platformer genre.

You play as a young ninja warrior tasked with delivering a sacred scroll to the top of a mountain after his village is attacked by demons. It isn't a wholly original idea by any means, but The Messenger eschews any self-seriousness in favor of a humorous and self-referential tone, regularly riffing on action-platformer tropes through the ninja warrior's conversations with various characters. The excellent writing keeps things lively and fresh, with jokes and pop culture references interwoven with an ambitious and clever narrative involving a time-travel mechanic that ties well into the gameplay system.

The ninja's skillset is initially limited, but it expands quickly to include abilities like a rope dart, wall climbing, and aerial gliding as well as a couple of optional techniques like a boomerang shuriken. Most interestingly, The Messenger replaces the classic double-jump move with something called cloudstepping, an ability that only makes double-jumping available after you've successfully landed a sword blow on an enemy or object mid-air.

This means you simply can't double-jump just anywhere, and an element of skill and timing is added to regular proceedings--chain several hits in succession and you can almost fly across the map by cloudstepping, but whiff one slash and you will find yourself staring into a bottomless pit. There is a great satisfaction to be found in the demands of successful cloudstepping, and the controls are impressively responsive to accompany your needs here.

The rewarding high-risk mechanic is complemented by The Messenger's smart design. Almost every level is crafted in such a way that it can be traversed using a number of different approaches, and exploration and experimentation are encouraged at every corner. You can take the straightforward route, or you can attempt the more difficult cloudstepping route that ultimately yields greater rewards due to numerous well-hidden secrets sprinkled throughout the game.

The Messenger starts off fairly easy, but the difficulty quickly increases as you acquire more abilities. Harder obstacles and challenges are introduced, and the game forces you to make the most of your abilities in order to keep up. Death is common, but the momentum never stops due to the use of generous checkpoints, allowing you to quickly learn from past mistakes and improve your muscle memory. The Messenger never feels too overwhelming or too easy, and its pacing and difficulty curve is nicely balanced--there is always a satisfaction to be had when a secret is found, a difficult obstacle is conquered, or a boss is defeated.

The Messenger also features a big twist: While the first half of the game is a linear action-platformer, once the midway point is reached, the game's narrative expands, unlocking time travel to and from the future. The game switches from its vibrant 8-bit aesthetic to an even more beautiful 16-bit art style, with richer backgrounds, a more diverse color palette, and more advanced audio processing to contrast with its previously chiptune soundtrack.

Additionally, the map and mechanics open up in the style of a Metroidvania, and a mechanic is introduced which allows you to travel back and forth between eras. A whole new dimension of puzzling opens up, creating even more tantalizing opportunities for exploration--you'll have to go back and forth often to maneuver around a level's physical obstacles and differences in each time zone. It's a simple but creative and aesthetically impressive mechanic that works very well.

The only thing that becomes distracting at this point in the game is the limited number of enemy types--there aren't that many of them, and encountering and killing the same monsters over and over again as you explore can become tedious. And while the 20-or-so hours of time-traveling, traversal, and swordfights lead you to a satisfying and appropriate climax, the game has an abrupt ending that robs you of any sense of closure.

The Messenger takes the best parts of the action-platformers it takes influence from and reinterprets them well. With clever writing, well-designed levels, and balanced difficulty curve, the game continuously hooks you with enticing skill-based challenges and satisfying payoffs. Your character might have an immediate imperative to delivering a world-saving scroll, but the journey there is definitely one to savor.

View Comments (15)
Back To Top
8
Great
About GameSpot Reviews 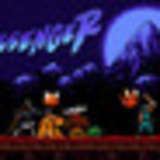 Alexander spent over 20 hours perfecting his vast array of ninja skills in his successful delivery of the all-important scroll. Additional testing of the Switch version was handled by GameSpot staff. Complimentary review code for The Messenger was provided for the purposes of this review.