The Two Towers is a full-on action game that features great gameplay mechanics, stunning visuals, and lots of extras that Lord of the Rings fans are sure to enjoy.

Those familiar either with last year's blockbuster film or with the literary source material know that the basic premise of The Lord of the Rings is that a small group of heroes possess a ring that an evil overlord needs to obtain in order to ensure his conquest of the land. The first film, The Fellowship of the Ring, followed the exploits of the heroes as they journeyed forth in an endeavor to destroy the ring. The first film ended with the heroes splitting up. The second film, The Two Towers, is the second chapter in the story, and the game continues the storyline through its narrative, and it also includes footage of the upcoming film sequel.

Now Playing: The Lord of the Rings: The Two Towers Video Review

Though the game is named after the second chapter in the film series, the game's events actually capture elements from the first installment as well. In fact, the entire first half of the game is based on the first film. The game opens with the video sequence that opened the first movie, explaining how each of the world's races has its own ring and that one ring was created to rule over the others. The opening battle sequence featured in The Fellowship of the Ring is where you begin to play the game. This sequence introduces you to the gameplay mechanics by showing onscreen controller information as you play. From here you play as any one of the game's three characters--Aragorn the human ranger, Legolas the elven archer, and Gimli the dwarven fighter--through 11 more levels based on action sequences from both films. Some sequences, like the initial battle with the shadowy ring wraiths from The Fellowship of the Ring, are surprisingly short, but some of the later battles have you fighting off a seemingly endless horde of creatures.

The Two Towers gives you a strong set of upgradable attacks that are all very easy to execute. Quick attacks are good to use against weaker, unshielded enemies, while you'll need to use a fierce strike to do any real damage against stronger enemies or enemies that have shields. Chaining attacks together is the most effective means of disposing of enemies, and the game includes a large number of different combos. Chaining attacks together also fills an onscreen meter. The more enemies you concurrently strike, the higher the meter will go, which builds your character's experience level. The more experience you earn, the more moves you can purchase to improve your character. Also, if you strike enough enemies in a row, you can increase your character's attack strength for a short time. This reward system, which puts an emphasis on continuously striking enemies, works well to keep the action fast-paced and fresh. When the action gets too thick, you can parry attacks and kick enemies to knock them off balance. Some enemies will attack from afar by launching arrows. Defeating archers requires you to quickly parry the arrow and follow up with a ranged attack of your own. Aragorn and Legolas have bows that you can fire, while Gimli throws hatchets to take out enemies from a distance.

The action throughout the game moves quickly, with multiple enemies always attacking from various directions, but the game's targeting system is a simple one that easily lets you steer your character and his attacks toward the nearest enemy. This "easy to learn, hard to master" system puts the focus on perfecting your technique to dispatch enemies as quickly as possible in order to gain as many experience points as possible, rather than simply fighting your way from level to level. Also, while the majority of the game pits you against a seemingly never-ending horde of creatures, the game does include a few boss fights that are fairly typical but by all means great looking.

Though there is a lot to unlock and discover in The Two Towers, dedicated players should be able to cruise through the game in less than five hours. Of course, there's always the ability to go back through with one of the two remaining characters, and your performance is tracked on a level-to-level basis, so you can always go back to another level and try to improve upon your past achievements. The game also features quite a bit of unlockable content, including a survival mode and a sizable video interview with various members of the movie's cast. So while the game is decidedly short the first time through, fans of the source material should find plenty to stick around for.

Visually, The Lord of the Rings, The Two Towers is a very impressive looking PlayStation 2 game. Even when there are an incredible number of enemies onscreen at once, there is little to no slowdown. The character models of the heroes and enemies are very detailed and feature terrific, realistic animation. The environments are also well done and accurately re-create those seen in the films. The camera angle changes from fixed positions to intelligent angles that follow your character. This not only creates a cinematic look to the game, but also gives you a very good look at what's happening onscreen. The only negative point worth mentioning is that the polygonal models used during the prerendered cutscenes aren't very good.

The Two Towers features the soundtrack from the Fellowship of the Ring film as well as some tracks that were made for the film but were later cut. The music includes ominous moody melodies that instantly ramp up to full-blown orchestral tracks, taken straight from the action sequences in the film. The sound effects are nearly perfect and fit the action well. The actors from the film voice the game's dialogue, and it all sounds fantastic.

In the end, The Lord of the Rings, The Two Towers is a traditional action game with a terrific gameplay system that encourages you to battle it out like there's no tomorrow. This system is difficult to master, which really adds a lot to the game's replay value. Most of the levels are set up in a way that makes them fun and easy to replay with other characters. Fans of the first film will definitely want to pick this one up, but those who enjoy action games in general will also find a lot to like here, in spite of the game's short length.

View Comments (2)
Back To Top
8.1
Great
About GameSpot Reviews 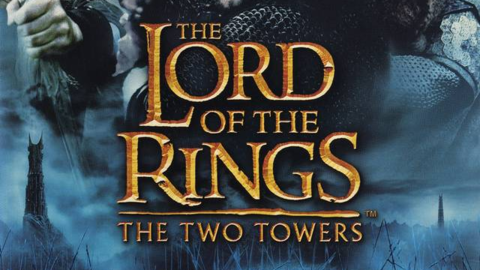