The Lord of the Rings: Conquest Review Review

The Lord of the Rings: Conquest is an exciting and action-packed way to experience Middle-earth, provided that you have the patience and fortitude to shoulder a few frustrating burdens.

The Lord of the Rings universe is full of memorable battles. No matter whether they are staged in a cramped burial chamber or on a vast, open plain, each clash of arms teeters between exultant triumph and agonizing defeat. In The Lord of the Rings: Conquest, you'll experience your fair share of both. There are abundant thrills in both the good and evil campaigns, from attacking oliphaunts with catapults on the Pelennor Fields to burning the ringed ramparts of Minas Tirith. However, the frantic combat can often devolve into a button-mashing frenzy as you try to avoid the many varieties of death (some unpleasantly cheap) that await you on the battlefield. These frustrations may prove to be too high a cost of entry for many, but if you're willing to brave the pitfalls (or are a big Lord of the Rings fan), then Conquest has many hours of satisfying and immersive action for you to enjoy.

Now Playing: The Lord of the Rings: Conquest Video Review

The best hours you'll spend in Conquest will be in the campaigns. The War of the Ring campaign puts you on the ground in the most memorable battles from the books, taking a few detours from canon along the way. The well-crafted, immersive environments mirror those of the movies, from the filthy industrial pits of Isengard to the crumbling walls of Osgiliath, and the score draws on themes from the movies to make battles feel more dramatic. As fun as the War of the Ring campaign is, there's an exciting novelty to playing as the forces of Mordor in the Rise of Sauron campaign. In this alternate storyline, the ring bearer fails in his mission and the once-ebbing tide of evil flows forth across Middle-earth, scouring all in its path. Cutscenes between levels use footage from the movies to craft a believable narrative around your dark exploits, and it's morbidly thrilling to destroy beloved locations and heroes. The last level in particular is so delightfully sinister that you'll likely find yourself cackling with malicious glee.

During most of the battles, you'll be fighting as one of the rank-and-file soldier classes. The warrior, the archer, the mage, and the scout all have their own unique strengths, weaknesses, and special attacks. From the mage's firewall to the warrior's whirlwind sweep, each class can perform a number of pleasingly powerful special attacks by drawing on energy gained from fighting and surviving. As deadly as each class can be, they are also vulnerable. An archer can easily mow down a warrior from a distance, but if the warrior manages to close the gap, there isn't much that the archer can do to survive. Close combat is brutal and chaotic, and once you get knocked down, it can be very hard to get up. Because fights favor the soldier who lands the first strike, they often become frantic button mash-offs. This can be tense and exciting, but it also makes defeat bitterer than it ought to be.

Working with other players is a great way to shore up your defenses, and The Lord of the Rings: Conquest features a cooperative campaign mode for two players, both locally and online. However, when you're going it alone, you'll find that not only is friendly AI unhelpful, but the enemy AI also sees you as public enemy number one. You'll have to destroy the lion's share of the enemy forces and be vigilant for attacks that can kill you instantly (such as fire arrows, backstabs, and anything a troll or ent does). You have a limited number of lives, and with so many ways to die, they can go quickly. Restarting the level is mildly tedious, but it can be a blessing in disguise when a mismatch between friendly and enemy spawn rates has you facing an insurmountable tide of foes.

It can be frustrating to be a grunt, so it's fortunate that The Lord of the Rings: Conquest offers many ways to make your battlefield presence more formidable. The simplest of these involve mounted weapons such as catapults and ballistas: powerful yet destructible machines of war that can be a blast while they last. You can also mount horses or wargs and ride through enemy ranks, sword a-swinging. Taking control of an ent or a troll lets you grab, smash, and throw enemies to your heart's content, and rampaging around on a massive, lumbering oliphaunt is unwieldy fun. Occasionally throughout the campaign you will also get the chance to play as heroes, such as Gandalf, Aragorn, Sauron, and the balrog. These units are powerful versions of the normal classes with their own unique special attacks that let you wreak all sorts of havoc. There is a pleasing variety of heroes featured throughout the campaigns, enough that there is an entire online mode dedicated to hero play.

Hero Deathmatch is just one of the 16-player online modes available in Conquest. There is also normal Team Deathmatch, as well as Lord of the Rings versions of Capture the Flag and Territories. Everyone chooses a soldier class to begin with, but the many maps feature the aforementioned machines and mounts to spice things up. When a team reaches a certain percentage of points needed for victory, the top-scoring player will be offered the opportunity to spawn as a hero. It can be tough to break a team's momentum at that point, but success really depends on the players' willingness to work together. Playing against human opponents is both more exciting and more frustrating. It's more satisfying to work with human teammates to kill characters with human minds behind them, but those same human minds are more capable of getting the best of you with aggravating combat techniques. This makes online battles legitimately challenging, so you'll want to polish your skills in the campaigns first.

War is messy, and The Lord of the Rings: Conquest isn't a clean gaming experience. Combat can be as exasperating as it is exhilarating, and playing solo can be a trying endeavor. Nevertheless, these pitfalls are somewhat compensated for by two epic campaigns that draw you into a rich world in new and exciting ways. Fans of this world will get the most out of The Lord of the Rings: Conquest, but gamers who are looking to battle in an epic setting and willing to weather some frustrating elements will find plenty of excitement on this journey through Middle-earth. 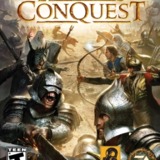 The Lord of the Rings: Conquest
Follow
$19.99 on Walmart
Buy