The Longest Journey is one of the best adventure games in years.

The Longest Journey is one of the best adventure games in years. Like a hybrid of classic Sierra and LucasArts games, it tells a great fairy tale filled with characters that you'll remember long after the game is over.

The Longest Journey is about a young woman named April Ryan, a visual-arts student who lives at a boarding house in a small, bohemian area in the city of Newport called Venice. While these locations suggest Southern California, the geographical setting of The Longest Journey is never stated; it's just a large city of the future. And while The Longest Journey's setting may be the stuff of science-fiction clichés, the game never resorts to the typical dystopian predictions. In fact, Newport seems very much like a modern metropolis, only with flying cars.

April has some problems. She's a runaway who has left home because of her father, though the exact reasons she left are never stated. She has a huge art project due, and she can't seem to get started. The guy who lives across the hall is a crude, arrogant jackass who won't leave her alone. And most importantly, she's being plagued by strange dreams that seem a little too real.

The game begins in one of these dreams. April is standing high on a cliff, overlooking a strange land. On this cliff, she meets a dragon and a talking tree, and she is visited by a strange, malevolent mass that sends her careening over the edge - and back into her bed.

When she awakes, you begin to learn about her life. If there's one problem with The Longest Journey, it's that the opening is a bit slow. It's loaded with expository dialogue about April, her friends, and the city. While this isn't a problem in and of itself, it seems strange that there is so much exposition right off the bat, when you've yet to meet any of the characters or visit the places mentioned. These conversations would have been much more interesting had they come a bit later in the game, once you've actually familiarized yourself with the places and characters you learn about.

During the first chapters of the game, you explore April's life. You meet her friends, you go to her school and to her job at a local coffee house. It seems like boring stuff, but it accomplishes an important task - as you take part in her routine, you begin to really care about her and her comrades. Her friends all have the hallmark concerns of people making the transition to adulthood - school problems, turbulent love lives, and bad jobs.

The game gets more interesting once the truth behind April's dreams becomes more apparent. You learn that there are two different worlds: Stark is devoted to science and technology, while the other, Arcadia, is devoted to magic. April has the rare ability to "shift," to move between these two worlds. These worlds, which were once one but came to be two, are fascinating, and you'll be eager to learn more about both their history and their future. April's dreams and some strange occurrences in both worlds are taking place because the division between the worlds is being eroded. And April is the one who must restore the balance.

Once the truth is revealed, the game begins to take place in both worlds. April cannot control her shifting, so moving from one world to the next takes place at times both opportune and otherwise. In both places, April meets a fascinating range of characters. In Arcadia there's Abnaxus, a representative of the Venar, who live in all times at once. He's a copy editor's nightmare, as he shifts tenses midsentence and often midword. Then there's Burns Flipper, the foul-mouthed hacker who rides around in a little hovercar. Even the most minor character is interesting in The Longest Journey, and you'll find yourself concerned with all of their fates.

It's a testament to designer Ragnar Tornquist's storytelling ability that you become so attached to everyone you meet. His game follows the blueprint laid by the classics of the fantasy epic, even as April's eccentric mentor begins teaching the reluctant savior. But it's also an original story that's filled with interesting settings and people. The Longest Journey is sometimes sad, sometimes funny, and sometimes scary. At times, it's all of these things at once.

The worlds are brought to life with rich, detailed graphics. The character models may not be extremely detailed, but they are good-looking and diverse. The background scenery is colorful and varied, and no two locations look the same. The sound is even better, because of the nonintrusive ambient music and excellent character voices. It's commendable that Funcom took the time to create a great English translation of the game, especially considering that it may not ever be published in the States (the translation was done for the U.K. version, which was published in April).

The puzzles in The Longest Journey are fairly standard, though they get better as the game goes on. In the beginning, you'll have to use some of your inventory items in illogical ways. But later in the game, the puzzles become more intuitive and fit better into the story.

The Longest Journey's complex and interesting story is what's most important. It deepens as you get further into it, and once it's over you'll still be thinking about all the subplots and how they tied together. And the conclusion is bittersweet - it's uplifting and rewarding, but there's a strange sense of sadness to it as well. The only criticism that can be leveled at the ending is that the epilogue does little to wrap everything up, so it'll leave you wondering what happened to many of the characters after April's task was completed.

But the end does allude to a sequel, and anyone who plays the game will be more than happy at the prospect of one. It's not that The Longest Journey leaves you unsatisfied - it's that it leaves you wanting even more. 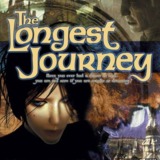