Spirit Tracks' exciting new mechanics and classic gameplay make it one Zelda adventure that has got a full head of steam.

There is something immensely appealing about the simple act of blowing your train's horn in The Legend of Zelda: Spirit Tracks. You'll find yourself making the classic "toot-toot" sound often as you travel around the world of Hyrule, reveling in the way it makes your inner 10-year-old kid giggle with glee. Playing Spirit Tracks brings up similar feelings; it's fun and familiar, basking you in the nostalgia of the Zelda series' well-trodden gameplay formulas while adding enough changes to make it feel exciting again. And while its look will undoubtedly bring up comparisons with 2007's superb Phantom Hourglass, Link's new adventure does away with its predecessor's repetitiveness and pacing issues, making Spirit Tracks the superior of the two Zelda games available on Nintendo's handheld console.

It not just an art style that Spirit Tracks shares with Phantom Hourglass. This new game is a sequel, and while, you'll play as a new Link, several familiar faces from the 2007 game make an appearance in Spirit Tracks (some as direct descendants of old characters and some as older versions of their Phantom Hourglass selves). Spirit Tracks takes place 100 years after the events of Phantom Hourglass, and the land of Hyrule is in peril. The demon king Malladus is stirring, threatening to break free from the Tower of Spirits (his prison for the last century) and throw off the chains that have kept him suppressed. These chains are actually the game's Spirit Tracks, a series of lines crisscrossing the world that the inhabitants of Hyrule have been using to drive their trains on. Young Link starts the game as a newly graduated engineer, off to see Princess Zelda and gain his official train driver's qualification. Once there, Zelda confides to Link her fear that Malladus may be on the rise and urges him to take her to the Tower of Spirits so they can both investigate. But before they reach the tower, they are attacked. The tower then breaks into several pieces, and the evil Chancellor Cole and his sidekick Byrne steal Zelda's body for use as the resurrected Malladus' new body. Zelda's spirit remains, however, becoming Link's guide as he strives to prevent the demon king's rise and to reunite his beloved princess back with her physical form.

It's certainly a first for the series for Zelda to die (for all intents and purposes) right at the start of the game and for her spirit to join you for the rest of the adventure, but it's not the only new addition. As well as being a Na'vi-like fairy companion for Link, Zelda can take control of phantoms, which are heavily armed guardians of the Tower of Spirits (and who players of Phantom Hourglass will remember as the near-invincible soldiers guarding the Ocean Temple). You can control both Link and the Zelda-possessed phantoms, and it's this new play mechanic that invigorates the tried-and-true Zelda formula. Similar in concept to the domination rod in Twilight Princess, Zelda-phantoms will dutifully accompany Link as he explores the tower, but you can also assign them specific paths by tracing a line on the DS's touchpad, or even get them to activate switches, carry items, or attack enemies. The cooperative puzzles you'll need Zelda-phantoms for start off quite simply--getting their invincible frames to block a column of fire so you can move Link past, for example, or hitching a ride on their shields to traverse lava pits--but by the end of the game they'll get increasingly complex and will require you to use different types of phantoms (each with its own special abilities, such as being able to roll through obstacles, carry fiery swords, or warp around levels) to solve problems. Even more tricky are several boss battles that require you to control a Zelda-phantom and Link. These fights are tense and exciting, requiring fast reflexes as you're forced to quickly switch between the two characters to find an opponent's weak points.

You can control only Link and Zelda in the Tower of Spirits, an area you'll have to visit several times to gain new maps that open up spirit tracks to different parts of the gameworld. Phantom Hourglass veterans who are worried that the Tower of Spirits is simply another name for the annoying Ocean Temple in that earlier game needn't fear; while you'll make multiple trips to the Tower of Spirits, the repetition and the time limits of the Ocean Temple have been done away with. You won't ever need to repeat the same levels. Outside of the Tower of Spirits and its dual Link-Zelda mechanic, Spirit Tracks plays similarly to most other adventures in the series. You'll venture into a multilevel dungeon, obtain a new weapon, and then use that new weapon to defeat a powerful boss creature at the end of that dungeon. Many of Link's weapons will be familiar to series veterans, including favorites such as the boomerang, the bow, and bombs. There are new weapons, too, including a hookshot-like whip, which Link can use to latch onto beams to swing across chasms Indiana Jones-style, and a special wand that can erect walls of sand.

Such adherence to formula may be the undoing of lesser games, but consistently clever level design and the tricky-but-never-cheap puzzles in Spirit Tracks mean the game is a winning experience at all times. Though the game doesn't stray far from what made the Zelda series great, you'll still feel a palpable thrill when you figure out the way to get that final dungeon key or use your newly found weapon to take down an initially intimidating boss. The game itself is not too difficult--there are only a few puzzles in the final two dungeons that may get you stuck--but the problems you'll have to solve are almost all uniformly engaging and make creative use of Link's abilities and weapons.

What's also surprisingly engaging is riding your train around on the spirit tracks covering Hyrule. You would think that having fixed railway lines to travel on would make moving from location to location boring, but the game throws enough variety at you to make most trips interesting. As well as using your train's horn to scare away livestock clogging up the tracks or using your cannon to blast away roving enemies, you'll have to contend with demon trains cruising the tracks. You'll need to plan ahead to avoid these enemies, keeping a close eye on your map and switching lines when necessary to make sure you don't end up on a collision course. Crashing into one of these enemies is the biggest negative of riding a train in Hyrule. You'll become familiar with the crushing feeling of inevitability that comes when you've made a mistake switching lines and are forced to simply wait until the collision. And every hit sends you right back to where you started your trip, resulting in a fair bit of repetition.

Driving the train is easy: You have three speeds to switch between using a lever on the right of the touch screen, as well as a rope for the horn, which you can pull at any time (toot-toot!). The rest of the game's controls are similarly simple and intuitive, with the touch screen and stylus used for all movement and actions. You simply hold the stylus on the screen to move Link and tap or slash on enemies to attack. It was a winning control scheme two years ago when used in Phantom Hourglass, and it has lost none of its positives today. The DS's microphone gets another workout this time around, though. You can use it as a weapon by blowing into it to send a gust of wind at enemies, and you need to use it to play the spirit flute. You'll learn several songs that you can play on the ocarina-like instrument throughout the course of your adventure, with each song having special effects, such as healing you in dungeons and unveiling hidden chests.

Side quests aside, Spirit Tracks features more than 14 hours of play in the main story, but there's plenty to do outside of trying to stop Malladus. As in most Zelda games, there are plenty of hidden secrets and chests to track down, and many are inaccessible until later in the game when you've unlocked all of Link's weapons. The train is also used in several of Spirit Tracks' side quests. You'll be asked to use your train to ferry fussy passengers, move livestock from town to town, and even hunt down and capture cute rabbits for relocation to a bunny sanctuary. Your rewards for these tasks range from extra hearts to whole new sections of Spirit Tracks, leading to previously inaccessible areas and even more hidden goodies.

The game also comes with a fun four-player competitive mode which, in a plus, can be played by using one game cartridge and the DS' download play mode. It's a pretty simple set-up--you and three other players race around single-level dungeons trying to grab as many force gems before the timer runs out. Dying--either by getting hit by a roaming Phantom or falling victim to an environmental hazard such as lava or a deep pit--will cause you to drop some of your collected gems, which your competitors can then swoop up. And while you won't be able to use your weapons, you can cause mischief to your fellow players in other interesting ways. If a Phantom is chasing you, for example, running past another player will cause the Phantom to switch their brutal attention onto them instead. You can also activate switches to open trapdoors which, if timed correctly, can send your competitors hurtling to their doom, allowing you to pick up their hard-earned gems. Multiplayer games--especially with a full complement of players--are usually hectic and lots of fun as you scramble to grief other players in order to steal their gems. But with only six maps available, multiplayer is more an interesting little distraction rather than a fully-fledged time sink.

The Legend of Zelda: Spirit Tracks hasn't improved markedly on the visuals seen in Phantom Hourglass, which isn't a problem considering that the first game looked great on the DS. Spirit Tracks is just as impressive, with the colorful world containing a surprising amount of detail to help bring the land of Hyrule to life. This game has an abundance of charm, from the endearing conversations you'll have with Zelda, to the many kooky and interesting personalities you'll come across and even the varied enemies. And while there's no dialogue in the game, aside from some grunts and squeals, the audio is impressive, with a tuneful soundtrack mixing seamlessly with classic sounds from the Zelda series' history (including that familiar yet still triumphant trill when you open chests).

You'll find plenty that's familiar in The Legend of Zelda: Spirit Tracks, but the inclusion of new mechanics, such as controlling both Link and Zelda, and the simple joy of driving the train lift this game above being just another Zelda adventure. This game is a top-notch adventure, and whether this is your first or 15th time in Hyrule, Spirit Tracks is a must-play. 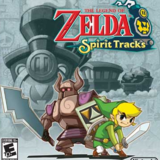