Majora's Mask is a great game, but it isn't for everybody.

Originally slated to appear on Nintendo's ill-fated Nintendo 64 disk drive add-on, the 64DD, this aside to the main Legend of Zelda storyline eventually made the jump to the N64's standard cartridge format. The idea was to present a new adventure for Link that kept the same basic gameplay and engine elements as the last Zelda game, Ocarina of Time. As a result, Majora's Mask is about as different as you can possibly get without changing the core elements that make it a Zelda game.

Majora's Mask opens shortly after the completion of Ocarina of Time. Link, finally back to his youthful self after defeating Ganon, decides to leave his familiar surroundings in search of adventure. While riding through the forest, his ocarina and his horse are stolen by Skull Kid. Link, of course, gives chase and eventually discovers that Skull Kid, under the influence of Majora's Mask, is planning to cause the moon to crash into the planet's surface - more specifically, the village of Clock Town. Skull Kid's plan will come to fruition in three days. So it's up to Link to use those 72 hours to stop Skull Kid's evil plan - but it'll take a lot more than three days to succeed. That's where the Ocarina of Time comes in. Once you've retrieved it from Skull Kid, playing the song of time warps you back to the beginning of the three day period, allowing you to save your progress and, essentially, take as much time as you need to finish the game. Skipping back in time robs you of certain items, such as money, arrows, and bombs. Also, any progress you've made in any of the game's dungeons is reset, so you must complete a dungeon in one three-day period. Since one of the ocarina's songs slows the flow of time, there's never really too much time-related stress.

Since you'll be reliving the same 72 hours over and over again, you'll eventually know where each important inhabitant of Clock Town is at all times. Certain conversations happen only on certain days, at certain times. The most important item in the game, the notebook, keeps track of these people and their habits. Once you've obtained the book, it's easy to figure out when and where you need to be in order to trigger certain events. At the heart of the game's main quest lies four dungeons, which are just as puzzle-laden as the dungeons found in Ocarina of Time. But some of the puzzles are much tougher this time around, because your inventory gives you a lot more options. Majora's Mask is all about collecting different masks. Some masks have simple and specific effects, such as making you run faster or increasing your sense of smell. But the three most important masks actually transform you into different creatures. The different creatures have different abilities. For instance, the deku mask lets you burrow into flowers and launch out of them to reach higher platforms. The goron mask lets you pound the ground and execute a rolling attack. The zora mask lets you walk underwater. The masks are handled just like any other inventory item, and the constant switching of items during some situations makes dealing with the masks and other items become fairly tedious. Luckily, you can skip the transformation cinema that occurs each time you use one of the major masks.

Between the game's time-sensitive nature and the its heavy reliance on side quests and minigames, it's tough to really get involved in the game's storyline. Your fairy, which gives you hints from time to time, only really helps out with the main quest, usually pointing you to the next dungeon. It won't, however, detail the three or four things you may need to do before you can gain entry to that dungeon. So it's easy to spend a lot of time wandering around, polishing off relatively meaningless minigames and side adventures in hopes that one of them will at least point you in the right direction. However, even though it isn't as engaging as Ocarina of Time, the game is still quite good - the control, which is identical to that of Ocarina of Time, is amazing, and the dungeons and puzzles are extremely well thought out.

Graphically, the game has been bumped up a notch, largely thanks to the Expansion Pak, which is required for play. This allows for a greater variety in textures, though they still get a touch blurry up close. The sound and music throughout the game are mostly composed of the sound and music from Ocarina of Time - even some of the ocarina tunes are reused. What little new music there is, however, fits in perfectly with the rest of the game's already outstanding soundtrack.

Majora's Mask is a great game, but it isn't for everybody. Even though it uses the same engine that drove Ocarina of Time, and the gameplay is the same on the surface, the adventure is extremely different. Some will appreciate the game's differences, while others will find the game's focus on minigames and side quests tedious and slightly out of place. While the game definitely has a lot going for it, and in the end comes together in a pretty tight package, skeptics should definitely rent this one first. 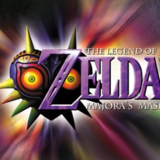