If you've been waiting for a truly compelling reason to invest in a GameCube-to-GBA link cable, this is probably it.

Ever since the launch of the GameCube, Nintendo has been giving its vision of "connectivity" between the GameCube and the Game Boy Advance the hard sell. We've seen plenty of GameCube and GBA games that let you swap items or unlock secret bonuses between the console and portable versions of a game, but these have largely been token gestures, and the shining examples of Nintendo's connectivity ideals have been few and far between. The Legend of Zelda: Four Swords Adventures pretty much nails all the bullet points that Nintendo has been hammering on--this is a game best enjoyed with a group of four, and using the Game Boy Advance as a controller has an appreciable impact on the experience. When you're all hooked up and playing with a posse, Four Swords Adventures is a great game.

As owners of The Legend of Zelda: A Link to the Past for the GBA will recall, Four Swords originated as a nice little multiplayer game that piggybacked along with that remake of Nintendo's seminal SNES adventure. Four Swords Adventures plays much the same, allowing competition and cooperation to coincide. All four Links will be vying for gems that increase the player's fighting power, and they will also be searching for other various bits of treasure. But if you spend your time just backstabbing the other players, you won't get very far, as many of the puzzles require coordination within the group. You'll have to push large blocks together, pull huge levers together, stand on pressure-sensitive floor switches in tandem, and fight massive swarms of enemies together--feats that would be impossible with just a single Link.

The game smartly keeps the scale, and thus, the level of commitment needed from all the players, relatively small by making each level self-contained. You can get special power-ups and heart containers over the course of a level, but when you walk into the next level, you'll be back to square one--basic sword attack, four hearts worth of health, and no secondary weapon. These levels vary a little in size, but they can usually be completed in under an hour, which seems like an appropriately bite-sized chunk of time.

Pac-Man Vs. was novel, and it was nice to have your own private inventory screen on your GBA in Final Fantasy Crystal Chronicles, but Four Swords Adventures really integrates the GBA into the experience. Every time you enter a building, a cave, some kind of subdungeon, or pass through a moon gate into the shadow realm, the action will break out from the TV down to the screen on your GBA. This can, admittedly, be a little jarring at the start. The first time it happens, it will likely take you a couple of seconds to realize that you need to look down at the screen on your Game Boy Advance--but eventually it becomes second nature. There are also some other uses for this new integration, such as a secret ballot that comes up at the end of each stage where players vote for the Light and Dark players on that particular stage. You could conceivably pull off most of what Four Swords Adventures does without GBAs, but having them there really does create a more dynamic multiplayer experience.

Alternately, if you aren't into the whole cooperation thing, the game offers a battle mode where two to four players can simply fight it out. Since the combat is pretty simple, the levels you'll fight on contain lots of deadly traps and incredibly lethal power-ups to spice things up. This mode still remains more of a nice aside; the main adventure is definitely the draw in Four Swords Adventures.

The original Four Swords was strictly a multiplayer experience, but the main story in Four Swords Adventures can also be played solo. Since many of the game's puzzles and boss fights require the cooperation of all four Links, the single-player game puts you in control of all four with classic forest green-clad Link leading the pack. The controls here are pretty intuitive, and it's really easy to snap the Links into formation or to control each Link individually. The game is still good fun when you're on your own, but without four different players to accomplish individual goals on their own, it moves a bit slower. What's nice about Four Swords Adventures, though, is that it doesn't demand that you commit to either the multiplayer or the solo experience, and each time you load up a save game, you're given the option to choose how many players will be in on the action.

One of the differences between the original Four Swords and Adventures is a more persistent narrative. The game starts off with the wind sorcerer Vaati kidnapping Zelda, along with the six maidens who were previously keeping watch over Vaati's prison. Link, heroic as ever, gives chase, and grabs the Four Sword to help him in his battle. Doing so divvies up our pint-sized hero into four different color-coded Links, and then the posse of Link heads out into greater Hyrule to undo the damage that Vaati has done, free the maidens, and, of course, rescue Princess Zelda. Though the story isn't as fleshed-out as a full-fledged Zelda game, Four Swords Adventures still includes plenty of interaction with NPCs, which provides for some occasionally clever dialog.

A cursory glance at Four Swords Adventures might lead you to believe that someone had just slapped a Game Boy Player on the GameCube, but a closer inspection would reveal a bit more. Yes, the majority of the graphics were lifted from the Four Swords GBA game, and as such, the sprites can appear a little pixelated. Adventures does improve on the original Four Swords' visuals, making the Wind-Waker-derived visual style even more reminiscent of the cel-shaded adventure of Link. Some of these enhancements are obvious, such as the curls of purple and black smoke that erupt when enemies are defeated, the ripple effects that occur whenever you travel through a moon gate into the shadow realm, or the various fire effects that you'll encounter. There's subtler stuff at work here, too, such as the shadows cast by clouds in outdoor environments and a nefarious-looking mist in caves--both of these effects definitely add to the atmosphere. The pieces match up stylistically, capturing the Hyrulean flavor almost impeccably. But the drawback of mix-and-matching GBA and GameCube graphics on the same screen is that there's a stark contrast in the quality, which has a negative effect on the game's cohesiveness.

The sound design for Four Swords Adventures will be even more familiar to anyone who has played any Zelda game, and especially to those who have played The Wind Waker. Virtually every piece of music, every sword slash, every yelp, and every little chime has been lifted directly from The Wind Waker, or they are simply pieces of The Legend of Zelda canon. An argument can be made that this is just lazy on the part of the developers, but really, these are the sounds that you expect to hear when playing a Zelda game. If the menu screen weren't accompanied by the stark opening notes of the main Zelda theme, or if you didn't hear that surprised-sounding eight-note progression whenever you uncovered a secret passage, you'd probably feel just a bit cheated. What's most important, though, is that the sound that's used works.

It's not too surprising that it took Nintendo developing a game itself for the whole connectivity idea to really crystallize. The key to the success of this game is that the game is inherently really good, with or without the hardware novelty. But, to be fair, if you only play Four Swords Adventures by yourself, you won't be getting the full experience. If you've been waiting for a truly compelling reason to invest in a GameCube-to-GBA link cable, this is probably it. 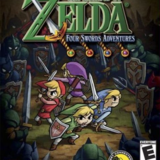 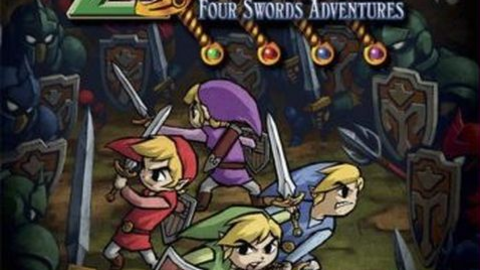 If you've been waiting for a truly compelling reason to invest in a GameCube-to-GBA link cable, this is probably it.

8.5
Sign In to rate The Legend of Zelda: Four Swords Adventures