The Legend of Spyro: The Eternal Night Review

Spyro continues his quest for mediocrity in yet another frustrating, unoriginal adventure.

Spyro's been a shadow of his former self for years now, so it's perhaps unsurprising that his most recent foray onto the Wii and PlayStation 2 is not an amusing one. The game tries so hard to be likeable, but its humor is forced while its gameplay is both plodding and shallow. The game also throws in new and unnecessary gameplay elements while failing to offer anything truly refined. Spyro and his game have reached an awkward adolescence, and the resulting identity crisis is both frustrating to participate in and awkward to witness.

The end of Eternal Night's predecessor, A New Beginning, left Spyro mostly bereft of his powers and the Dark Master on the loose. This time around, Gaul and his Ape army are up to no good, holding Cynder captive and seeking to revive Spyro's archenemy. The titular hero is again joined by Sparx the dragonfly, this time annoyingly voiced by a barely funny Billy West--though in the actor's defense, the bland script gives him little more than overused clichés with which to work. Gary Oldman and Elijah Wood are back as well, though Wood sounds even sleepier now than before, delivering more fake enthusiasm than a used-car salesman. If you played New Beginning and are intent on following this planned trilogy to the end, Eternal Night serves its purpose, though newcomers will probably just be confused without the necessary context. Neophytes and returning fans alike will be annoyed by the constant, often unskippable small cutscenes that take you out of the action, as well as the abrupt and jarring end to almost every cinematic.

As if to match Wood's self-conscious delivery, Eternal Night's gameplay never feels all that comfortable. This is a combat-heavy platformer, so you'll often need to handle a good number of cookie-cutter enemies at once. Spyro's tail attack is your basic combat move, though over the course of the game, you'll gain access to new elemental attacks in four different categories and string them together into various combos. The special attacks will likely elicit déjà vu for returning fans, with the exception of the newly introduced bullet time--or if you want to be technical, dragon time. Indeed, you can now slow down time for a few moments, though this element is simply another example of how more rarely means better. You'll need to use dragon time often, sometimes for solving a handful of simplistic puzzles, but more often than not, just to stay alive.

Sadly, the time-slowing mechanic, already a video game cliché, never works all that well here because developer Krome Studios tried to balance out the ease of bullet-time combat by making Spyro ultravulnerable to attack. It only takes five or six standard hits (and just a couple from the more potent enemies) for Spyro to shuffle off this mortal coil, which makes combat outside of dragon time needlessly frustrating. Nothing feels properly balanced: You often need to wait for animations to finish after combos are done so you can deliver another attack while many enemies deliver a multitude of knockback and stun attacks at once that leave you powerless to counter. The game simply demands that you use dragon time and punishes you when you don't use it with cheap deaths. When things kick into high gear, there are some entertaining moments to be had when you manage to string attacks together while kicking into slow motion, but these feel more like accidents--the product of selecting the right abilities at the right time.

The platforming elements also fall short of expectations because Spyro doesn't feel very agile. His double jumping is the worst culprit here. Because the available window of time between the first and second jump is hard to get a handle on, you'll often find yourself vainly attempting the second jump only to fall because you pressed the button a hair too late. There are also places you can get to that very obviously were never meant for you to jump on, so you'll slide off things from time to time as if they are coated with motor oil. And as in New Beginning, Spyro doesn't handle very well when he's airborne. Spyro's awkwardness may approximate the clumsiness of a juvenile dragon, but it isn't that much fun for the player. A platformer lives or dies by the effortlessness of its controls, but the frequent knockbacks, inelegant jumping, and overall frequency with which a button press has no onscreen result, make Spyro feel more like a sack of flour than a nimble dragon.

The visuals are colorful and full of particle effects, but they too suffer from a lack of character, relying on tired level design, as well as repetitive enemy models (you know, the ones you saw in the last game). Some environments are lovely to look at, while others suffer from a low polygon count and oversaturated colors. Animations are a little stiff too, which contributes to the overall gawkiness. As previously mentioned, the all-star cast's delivery lacks zeal, though the pretty soundtrack does an admirable job of setting a properly fantastical tone.

The Wii version allows you to swing the Wii Remote around for attacks and has some other basic motion controls, though using the Wii Remote's control pad to control the camera is less intuitive than the more standard analog-stick controls on the PS2. Otherwise, both versions are essentially the same, but only die-hard Spyro fans are likely to elicit much enjoyment from either of them. This dragon is not a boy anymore--yet not a grown-up either. Unless the series can find an identity, it seems destined to continue its total irrelevance. 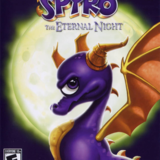