The Legend of Spyro: Dawn of the Dragon Review

Lackluster gameplay makes this a disappointing conclusion to the Legend of Spyro series.

When he first debuted on the scene just over 10 years ago, Spyro the lovable purple dragon starred in a series of truly excellent platformers on the original PlayStation. But oh, how the fire-breathing have fallen. The first two entries in his current trilogy, The Legend of Spyro, have been marked by mediocrity, and sadly, the conclusion follows suit. It's an unfocused, uninteresting game that, despite its flying heroes, never manages to get off the ground.

Picking up where The Eternal Night left off, Dawn of the Dragon concludes the Legend of Spyro series with an extremely run-of-the-mill tale of our purple hero, accompanied by nemesis-turned-ally Cynder, taking on the Dark Master Malefor. It all makes for a typical wrap-up to a fantasy trilogy. Dawn of the Dragon certainly looks like the climactic chapter of an epic fantasy trilogy, too, and not just any epic fantasy trilogy. Specifically, it takes more than a little visual inspiration from the Lord of the Rings films. This influence is frequent and undeniable, from the initial confrontation with a massive fire-breathing demon of the deep, to a desperate battle against the siege towers of tremendous armies from the ramparts of a pristine city, to the foray into a scorched land dominated by a volcano above which the Dark Master resides. And as Spyro, Elijah Wood has some distinctly Frodo-esque lines of dialogue. While not very original, the visual design, coupled with a gorgeous musical score, is effective at creating the sense that the fate of the world hangs in the balance of Spyro's struggle. Unfortunately, the gameplay falls well short of matching that level of excitement.

The combat in Dawn of the Dragon has you employing a combination of weak and strong melee attacks, an assortment of elemental powers, and the ability to grab smaller enemies in your adorable little jaws and thrash them around. You can also guard against attacks and perform a quick roll to evade them. Despite this variety of moves at your disposal, the combat is never interesting. In the earlier parts of the game, you'll often fight so many weak enemies at once that the screen becomes a cluster of chaos, making it all but impossible to tell when an attack is incoming. Not that you need to be defensive, though, since pure button mashing is enough to defeat these foes. Later on, you'll frequently be waylaid by groups of larger, more powerful enemies. Much too frequently, in fact. These enemies are dull and require no particular skill to defeat, but they can take a long time to wear down, and they kill the game's momentum and make the last few chapters feel like an uphill slog.

The few boss battles look monumental, but they're simple and unimaginative. You avoid the same obvious patterns and exploit the same weaknesses over and over again. And worst of all, there are some so-called elite enemies scattered throughout the game who are wickedly frustrating. When you encounter one for the first time, you're given no clue how to defeat him, and initially, they may seem downright impossible. Even when, through trial and error, you stumble on the trick to beating them, they do so much damage that sometimes one slipup on your part can cost you your life. It's true that fighting elites is always optional, but you'll often earn some useful rewards for defeating them, such as pieces of armor that give Spyro's or Cynder's abilities a bonus, providing an incentive to just suck up the frustration and deal with the chore of fighting them. Lousy content is lousy content, optional or not, and the elites may frustrate and alienate some of the younger players to whom the game appeals.

Both Spyro and Cynder have four elemental powers, and some of them are fun to use for a little while: Cynder's wind power lets you pick up an enemy and fling him into his companions, and Spyro's electricity power can leave some foes stunned and open to attack for a moment. And powering up these abilities over the course of the game can be satisfying. Spyro's fire-breathing ability looks pretty powerful to begin with, but after you use the experience points you've earned to purchase its final upgrade, it's far more impressive. However, because the combat in which you employ these powers is never involving, the powers themselves are redundant, and switching them up isn't enough to keep things interesting.

Dawn of the Dragon departs from the earlier games in the series by letting you take flight at any time. A few presses of the jump button have you take to the air, but this new ability doesn't end up having much of an impact on the overall gameplay. It's useful for covering larger distances, but there are always gusts of wind and other mysterious forces that prevent you from exploiting this freedom, so you'll still have to do a fair amount of platforming. The game sometimes tries to do too much with flight. One sequence in particular has you zooming through the cavernous innards of a giant to strike at its crystalline heart, and like so much of the game, it looks thrilling but just isn't much fun to play. The flight controls are fine for gliding gently across the levels, but they lack the precision that a sequence like this calls for.

It's a good thing you have a way of getting around faster, though, because the level design is often so unfocused that you'll need to spend a good deal of time wandering and searching for where you're supposed to go next. One level requires you to first find one cave, then another, and then another, and while the area isn't enormous, it's large enough that you can spend quite a while looking until you stumble upon your next objective. (According to the manual, your dragonfly companion, Sparx, "is always willing to help Spyro and Cynder find their way when they get lost." No greater lie has ever been told.) Later, you'll soar all over the huge body of the aforementioned giant looking for a number of small crystals you need to destroy, and again, you may spend a good bit of time looking all over the place until you find your next objective. A bit of open-ended exploration can be fun, but levels like these could have benefited from the occasional nudge in the right direction.

Spyro and Cynder can never get too far apart, thanks to a cursed magical chain that binds them together. If you're playing alone, you can switch between them on the fly. The AI-controlled character isn't very useful in combat but fortunately doesn't take any damage either, so you don't need to worry about protecting your companion. And in most cases, the AI character does a fine job of following you around, but there are a few things, like ramps, that the character sometimes gets stuck on and seems incapable of handling, forcing you to switch back and forth to get both dragons into a position from which you can advance freely again. You're better off if you can convince a friend to join you. The ability to have a second player drop in or out of local co-op at any time is convenient, though it's too bad none of the versions offer support for online cooperative play.

On the Xbox 360 and PlayStation 3, Dawn of the Dragon is gorgeous. From the picture-perfect vistas of green grass and rushing rivers under a pristine sky to the foreboding burned lands of the Dark Master Malefor, the vibrant colors and detailed environments create a compelling world that will appeal to younger players and older fantasy fans alike. As you'd expect, the Wii version isn't quite as impressive, but it's no slouch, though the less captivating visuals, combined with a few awkward motion controls, put it a bit behind the other versions. (Blocking is done by lifting the Nunchuk, for instance, and it's mildly distracting to have to always be mindful of how you're holding it so you don't accidentally stop attacking and start guarding.) In all versions, the camera can be frustrating. There are times when you can rotate it around you any way you please, but more often than not, you can only inch it a bit in one direction or the other, which is very limiting and prevents you from getting a good sense of your surroundings.

The excellent score, with its urgent, rousing choral sections and lush orchestrations, creates an emotional pull that, unfortunately, the gameplay doesn't warrant or support. As Spyro, Elijah Wood is a good fit, at least in part because of his familiarity as Frodo and the similarities between that unlikely hero's quest and this one's. Christina Ricci is fine but underused as Cynder; likewise for Gary Oldman as the wise Ignitus. As Malefor, Mark Hamill's voice is processed through so many filters to make it sound supernaturally booming and evil that they may as well have gotten Pee-Wee Herman to play the part for all the difference it makes. Wayne Brady, as Sparx, is forced to utter such painfully unfunny asides that you'll want to reach right into the screen and swat him yourself.

If you've already trudged your way through the first two Legend of Spyro games, you may want to play this one as well, just to see how it all ends. It will take most players around 10 hours to finish Dawn of the Dragon. But while you can sense the visuals and music straining to create a mood of epic fantasy excitement, it's just not enough. This game isn't good enough to redeem the series or to be a compelling stand-alone experience, so if you've avoided the previous entries, there's no need to jump in here. 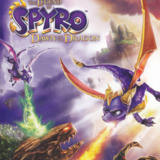