The Legend of Grimrock Review

Legend of Grimrock is a faithful return to old-school, hardcore role playing.

Long before Mass Effect's Reapers and Skyrim's arrows to the knee, there were games like Eye of the Beholder: first-person dungeon crawlers that fell by the wayside with the advent of 3D graphics. Developer Almost Human has made such a triumphant return to the subgenre with Legend of Grimrock that the word "resurrection" springs immediately to mind. Grimrock is decidedly old-school, right down to including a PDF of graph paper for drawing your own maps.

You start out with a party of four prisoners who get unceremoniously chucked into a huge dungeon (the titular Grimrock) and instructed that if they can escape alive, all charges against them will be dropped. While Grimrock offers you a premade party to start with, you can dump them and instead custom create four stalwarts to suit your tastes.

There are four races to choose from: humans, minotaurs, lizardmen, and insectoids. Humans are fairly good at everything, while each of the other races specializes in one of the three classes: fighter, rogue, and mage, respectively. On top of race/class distinctions, Grimrock has a fairly simple statistical attribute system: when characters level up (by killing enough monsters), they get a number of skill points with which they can raise certain class-based skills (for example, air magic or staff defense for mages, and swords or armor for fighters). Raise a skill high enough, and you unlock a variety of perks, including stat boosts, new spells, and special abilities like backstabbing for double or triple damage.

While leveling your characters' skills is critical for surviving the game's many hostile encounters--some of which are brutally difficult--you need your own set of abilities, largely of the cognitive nature, for solving Grimrock's arsenal of mind-bending puzzles. Sure, they start out easy enough--flip a lever here, jump down a pit there--but eventually they get so tough that even a grizzled vet will run screaming to the Internet for assistance. Still, there's nothing quite as satisfying as putting the old noodle on the proverbial rack and coaxing forth the answer to a real nutcracker of a puzzle; the sense of satisfaction almost supersedes the sense of anticipation at collecting your reward of loot. Almost. Many of Grimrock's puzzles are optional, and you can beat the game while leaving a lot of the really tough ones aside, but they do yield powerful treasures that assist you in Grimrock's toughest (and totally mandatory) challenge: combat.

Where fighting's concerned, Grimrock is a strictly tile-based affair. That is, you move a single square at a time, ahead, behind, or laterally. Enemies also move in this piecemeal manner, and combat generally consists of you and your foes ending up in adjacent squares and then, er, squaring off. You fight by clicking your characters' two action buttons (one for each hand), which initiates an action based on whatever item is currently associated with that button. Swords swing, bows thwack, throwing knives hurtle toward enemies, and staves bring up the game's rune-based magic interface. Here, you're presented with a 3-by-3 grid of runes that you must combine to form spells that you cast by hitting the large staff button.

To the game's great credit, these runes are logically connected to specific concepts (there's one that signifies "fiery" things, one that signifies "projectile," and so on), so you can experiment on your own, although the game does provide you with spell "recipes" at regular intervals, too. You'll often make surprising discoveries, although mages cannot cast spells above their level, even if you manage to decipher the rune combinations through trial and error.

Whether you take the magic or melee approach, every action you take in combat requires a cooldown period to recharge, during which your characters can't attack, and enemies will be pounding on you. Theoretically, then, your goal is to prevent your party from being attacked on more than one side by managing your physical position, while still bringing the majority of your front line and ranged power to bear on the bad guys and minimizing your cooldown exposure.

There's a certain amount of depth to this system. But because the battles can be extremely difficult, you spend much of your time abandoning "real" strategy and instead simply floating like a butterfly and stinging like a bee. That is, you run up to an enemy, launch all your attacks, and then run away while waiting for the cooldowns to recharge. You might think of this as "exploiting" the game's AI, but even so, Grimrock's battles are intense, much more so than the step-by-step movement around the map would seem to suggest.

That intensity is a good thing: overcoming a tough foe with your last ounce of magical energy or with a lucky critical hit is tremendously satisfying precisely because the game is so difficult. The same is true of discovering one of Grimrock's cleverly hidden secret areas, or managing to survive long enough to get to the next life crystal, at which you can revive downed party members, heal, and save the game (don't worry, you can save and load anytime, too). All of these high-degree-of-difficulty feats can frustrate you from time to time, but for that same reason, they bring a real sense of accomplishment when you finally overcome them.

Some of Grimrock's old-school touches haven't aged quite as gracefully as the difficulty level, however. While there's enough variety in enemy types and map layouts to keep you on your toes, any given level of the dungeon consists of the exact same wall and floor tiles, the same two or three enemy types, and a few torches in sconces. That's pretty much all you're going to get a look at. Sure, the game's concept is that you're trapped in a dungeon, and that's naturally not going to be a feast for the eyes, but Grimrock doesn't even give so much as a little light snack for the eyes. There's no music to speak of, either, so you may want to have tunes playing in the background. A solid player should get through the whole thing in less than 20 hours, even gathering the majority of secrets and solving most puzzles. Thankfully, Almost Human has promised to release new dungeons your party can adventure through, and fan-made content is surely on the way as well, to add more length and depth to your gaming experience.

All that said, this game costs 15 bucks. Given the level of intensity, the eminently satisfying challenge of the puzzles, and the surprising twists the story takes (not to mention the good loot!), it's fair to say that Grimrock offers more enjoyment than you'd have any right to expect given the low price point. If you're into the classic RPG motif, or if you just like a challenge that goes beyond crafting armor and performing endless fetch quests, Grimrock is worth your dime. Just don't be surprised if you find yourself up late one night, surrounded by empty pizza boxes, your face illuminated by the warm glow of your flatscreen, trying to figure out that darn lightning puzzle. 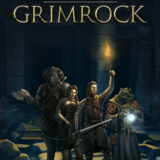 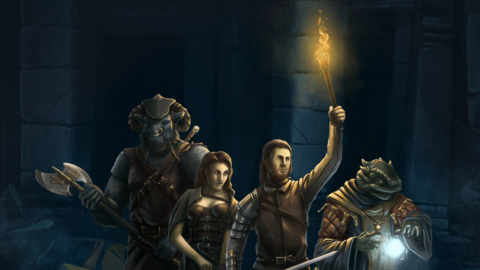 Legend of Grimrock is a dungeon crawler inspired by old-school classics of the genre, though it still brings its own twists to the game.