Blow out this candle.

The Legend of Candlewind: Nights and Candles had me at "Eye of the Beholder"--and lost me about five minutes after I finished the install process. You may be willing to try any role-playing game promising to evoke the feel of the classic D&D first-person adventures, but developer Atmosphere Entertainment Studios' dismal and pointless exercise in nostalgia is unlikely to win your admiration. Mindless action, stupid difficulty, a needlessly convoluted interface, and filmstrip production values combine to turn off even the most forgiving player looking for a blast from the past.

In many ways, Legend of Candlewind is even more primitive than games like Eye of the Beholder and other late 1980s and early 1990s dungeon crawls like Dungeon Master, which sold a whole lot of Atari STs in their day. The game opens with a lengthy text blurb about the fantasy realm around the town of Candlewind and the need to venture off to ominous Blackwood Forest to deal with some rogues. So, no cutscenes or animations here, though the font looks kind of nice and Tolkien-esque, at least. From there, you get dumped right into a dungeon labyrinth (uh, what happened to that forest?) with four adventurers ready to go. This gang consists of the standard tanks up front and mages in the back. There are no options to create your own characters or do any sort of customizing.

I generally don't mind being stuck with pre-rolled heroes. Nevertheless, I have to admit to being annoyed here, if only because of ridiculous names like Garrison Hiffs and Shailee Frostflower. Even worse, all the character profile pics are of the same scraggly haired guy who looks like he might have been hauling gear for Deep Purple circa 1973. All are given minor alterations with the less-than-creative application of facial hair and a helmet, although the attempt to make the members of this gang of four look different from one another is so half-hearted that it's laughable. And yes, even poor Shailee gets this treatment, which leaves her looking more like a third-rate groupie hanging out with the roadies backstage than "the daughter of a forest witch."

Game mechanics are even more irritating. There are no frills here--absolutely none. The game doesn't have keyboard shortcuts, which leaves you doing everything with the mouse. There are no proper tool-tips, even for the usual items, like spells. The developers also seem to have gone out of their way to create the most cumbersome interface possible. You need to hold down the left mouse button and open up a menu just to select and move objects in your inventory. The whole system is ridiculously obtuse. It took me 10 minutes to figure out how to shoot an arrow, because you have to actually pick arrows, divide them, and then manually load one onto a bow.

Adventuring is boring and repetitive. All you do is trudge through the stone-walled chambers of a labyrinth, stopping only to kill the same handful of unconvincing monsters in exhausting turn-based battles. Creatures like goblins, rogues, and, uh, goblins and rogues are static models that simply blink their way closer and closer to your position. Actual combat is depicted by these models leaping up in the air, in an effect akin to somebody waving a paper cutout at you. Only single creatures are shown. Attacks by groups of goons happen, but their numbers are depicted via icons at the bottom of the screen, as they line up and go at you single file.

Successful attacks in Legend of Candlewind aren't shown by any sort of swinging sword, but by the enemy in question flashing red and occasionally spitting out a few drops of blood. Spells come with rudimentary pyrotechnics: I've thrown cherry bombs more impressive than the game's Fireball. The only sort-of presentation plus is the musical score, which features enough flute to sound like Jethro Tull on a bad day. That said, this score is a single looping song, and it vanishes completely after just a couple of minutes of play, never to return. Oh, and the sound effects consist of thuds and louder thuds.

All you do is trudge through the stone-walled chambers of a labyrinth, stopping only to kill the same handful of unconvincing monsters in exhausting turn-based battles.

As for combat strategizing, there isn't any. Once an enemy appears, everything gets locked down. You can't access your inventory during scraps at all, so forget about swapping weapons, taking a potion, or using some sort of magical gizmo. The lack of access to cool gear doesn't mean much, though, because the dungeon isn't exactly rich with treasure. Vanquished monsters don't leave behind loot drops. You're about as likely to walk out your front door right now and spot Bigfoot as you are to find a treasure chest in this game. Even when you do spot one, it's always stuffed with useless items like apples, loaves of bread, arrows, a rare gold coin or two, and the odd potion of healing or magic. Weapons and armor are virtually impossible to find. I spent most of the game with the same pathetic gear (the lead fighter is equipped with nothing but torches and a shield) that I received at the start of the game. These clowns come off more like wandering vagrants than the usual RPG heroes swinging swords and rocking plate mail.

Difficulty almost immediately soars off the charts. If you push ahead into the labyrinth, you quickly run into murderous opponents who simply cannot be slain. You can't rest, either. Your only option when it comes to restoring health or mana is to quaff potions or cast spells, although the former is in short supply and mana points can be quickly exhausted by throwing around just a few incantations. The only way to get anywhere is by grinding out levels, courtesy of the game's handy "Wait for Monster" button that summons up random encounters. This is as exciting as it sounds. And very slow. Just a handful of experience points are earned in each battle. Arriving at last at the second level is cause to pop some corks.

Doors with obvious locks are scattered throughout the dungeon. Click on them, and you get a message about the door being opened with a key. Only there aren't any keys, and most of the doors are actually unlocked. It took me an hour to figure this out, and that was only because I accidentally clicked to move forward one too many times and wound up going right through a door. Even without these fake-out doors, nothing about the dungeon seems real. Encounters with friendly characters are not shown on-screen. Wandering traders, folks who need a hand, and other characters are shown solely with text descriptions and boxes you click to select actions.

No matter how starved you might be for old-timey role-playing, give The Legend of Candlewind a wide berth. This is a terrible, aggravating experience bound to disappoint you no matter how much you might want to relive the glory days of Eye of the Beholder. 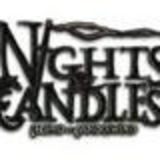 Brett needs a better Eye of the Beholder clone, or a trip back to 1991 where he can play the real thing all over again.