The Last Story is a brilliant role-playing game that's as rich and emotionally affecting as the best in the genre.

UK REVIEW--As you begin your journey in The Last Story, you get the feeling you've seen this all before; the maniacal dictator seeking ungodly powers, the crisis that threatens the survival of the world, and the band of shockingly youthful renegades, with even shockingly bigger swords, whose job it is to put it all right again. It's a familiar tale, but The Last Story is far from a familiar game. It's a deep, fast-paced JRPG, that evolves the genre in ways that enhance its existing tropes, without stripping away at its soul.

The best of the West is blended with the best of the East, resulting in a fantastically unique, exciting battle-system, beautifully rich visuals, and a story that--while familiar--has you feeling the deepest of care for the characters that live it. It's not just a fantastic JRPG, but a fantastic game in its own right, delivering moments of touching romance, disparaging betrayal, and eruptive action, all with a poignancy that makes those moments feel like they've come straight from the heart.

A lot of that comes down to the cast of characters; a ragtag group of mercenaries for hire who never know where their next paycheck is coming from and live from one job to the next. It is their various drives and wants that propel you through the story. Lead character Zael has fairytale dreams of knights and princesses; the group's leader Dagran craves the respect of the people, which is something he can never hope to achieve as a mercenary; and others, like Syrenne, simply enjoy a stiff drink and regular fisticuffs. Sometimes those desires collide with one another, creating tensions and conflicts that make their journey together all the more compelling.

These tensions come to a head when Lisa joins the group. Her mysterious past piques the interest of spiky-haired protagonist Zael--whom you spend the vast majority of the game playing as--with their blossoming relationship and its resulting ups and downs adding a hefty dose of melodrama to the proceedings. Sure, in true JRPG style, it can get a little saccharine, but it's balanced out by an overarching plot that introduces warring nations, corrupt governments, and the very survival of the land itself. There's even a sprinkling of religious iconography that gives you plenty to read into if you're eager to further immerse yourself in the richness of the narrative.

While the story is a sprawling epic, the world you explore is less so, at least at face value. Events take place on Lazulis Island, on which a single city serves as the main hub for your adventures. Its cobbled streets, seedy taverns, and stonewalled castles are filled with all manner of citizens--some eager to strike up a conversation, others to sell you some of their wares--that create a lively and atmospheric environment that touches on aspects of the Middle Ages, without being too heavy handed with its themes.

Despite being set in a single city, there are still a wide variety of quests. One moment, you're fighting off hordes of enemies in Lazulis castle; the next, you're enjoying a quiet drink in Ariela's Tavern before being whisked away to explore musty underground caverns deep beneath the surface. Between quests, you're given the freedom to explore the city--to talk to its citizens, to go shopping, to soak up the medieval ambiance. There are many side quests to complete too. Some are your typical fetch quest, but others go further, asking you to rescue lost children, learn how to swim, or go on dates with various singletons from the city. Such freedoms do wonders to distract you from the fact that the main story quests are largely linear in nature, with the excellent narrative just willing you to push onward.

Most quests you undertake involve action of some sort, and fortunately, The Last Story has a combat system worthy of the narrative that drives it. The combat system combines elements of the Western and Japanese RPG to create something that is wholly unique and thrilling. The action takes place in real time in the environment you're exploring, with enemies visible before you fight them; there are no random encounters or swishy battle screens here. Your melee attacks and those of your compatriots are largely automated, each of them hacking, slashing, or casting magic at nearby enemies.

Not everything is automated, though, particularly character movement, so you need to make the most of Zael's dodge and cover abilities to avoid enemy projectiles like arrows and magic attacks. Conveniently placed rocks, pillars, and walls give you plenty of places to take cover behind, and are the ideal place for letting fly a few shots of Zael's non-automated weapon, a crossbow. Different arrows have different effects, with some causing status changes, such as poison or sleep, and landing a well-placed headshot fells an enemy with a single shot. From cover, you can also seek out destructible areas of the environment, such as bridges that house archers or towering columns of rock that are just begging to be dropped onto an gang of unruly monsters.

Those areas can be destroyed by issuing commands to others in your party, with all manner of fire, ice, and nature spells at your disposal. As each spell lands, it creates an elemental circle, which, when walked through, adds that elemental ability to subsequent melee attacks. By using Zael's gale ability you can "diffuse" those circles, which cast further status effects, such as silence. Or in the case of healing circles, they instantly heal your entire party. And if that weren't enough to be getting on with, there's Zael's gathering ability, which draws the attention of enemies onto Zael, leaving your teammates free to cast spells or land a few blows with their swords.

It's a strategic system that works brilliantly, not least because it takes place in real time, which makes fights dynamic, action-packed affairs. The pace at which new abilities are handed out is also spot-on, giving you time to master them, without ever feeling underpowered during battles. Customization fiends may lament the lack of options when it comes to each character's spells and abilities, but weapon and armor upgrades give you plenty to tinker with, each affecting your characters' various statistics, such as stamina, attack power, or defensive abilities. More superficially, there a range of dyes you can buy that let you go colour crazy with clothing options.

Such enhancements make it over into New Game Plus, which unlocks once you've beaten the game, giving you the opportunity to take on all those small side quests and secret areas you might have missed the first time round, with a powered-up posse. Further attempts to extend the game's longevity come in the form of multiplayer deathmatch and cooperative horde-style modes. They're not something you frequent often and feel a bit tacked on, but given the wealth of content on offer in the single-player campaign, it's no big loss.

The Last Story is a fantastic game; one that pushes the JRPG genre forward in ways that are innovative yet still complementary to the tradition of the genre. Its rich narrative straddles the line between emotionally affecting and breathtakingly action packed; its thrilling battle system is a unique, modern take on everything that has come before. And its visuals are some of the best ever seen on the Wii, pushing the system to its limits with its beautifully detailed environments and dazzling special effects (even if there's a little frame rate stutter during more complex scenes).

And that's not to mention the music from legendary composer Nobuo Uematsu, with its majestic melodies complementing the action in a way that is truly sublime. But its biggest success lies with the characters themselves, their diverse personalities and formidable ambitions forever pushing you along their journey from rags to riches. You want to be there with them; to guide them through their darkest of hours; to share in their happiest of moments. You will care. That alone makes The Last Story worth the price of admission and a captivating experience that everyone should play, JRPG fan or not. 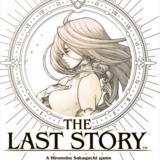