There are moments of unfettered joy in A King’s Bird. As you glide through tight corridors or shinny up a long passageway to the heavens, the freedom of no longer being shackled by gravity takes hold. It’s during these stretches where the minimalist art and serene score combine beautifully with your graceful movements that A King’s Bird reaches its potential. But those feelings are fleeting. Instead of bottling the rush of flight, A King’s Bird instead conjures frustration and tedium as you struggle to replicate that brief happiness that vanishes before you could even appreciate it.

Although there is almost no story to speak of in A King’s Bird, it’s told in a lovely manner that meshes wonderfully with the abstract world. An argument between (presumably) a king and his daughter (though it’s never spelled out who any person is) breaks out, but instead of their harsh voices crashing against the pristine aesthetic, dreamy instrumental music floats from their mouths. The feelings are captured without a single word being uttered: a begging question, a firm no, a rush toward rebellion. The story sets an intriguing mood that the rest of the game fails to live up to.

A King’s Bird is a platformer that hinges on maintaining your momentum to overcome the many hurdles that stand between you and the exit. The environments are populated by pillars, horizontal walkways, and slanted surfaces and your only tools are the ability to climb up walls and glide for short distances. Bounce quickly between two pillars and then leap off the very top to build your kinetic energy. Once airborne, zip through the air like a frantic hummingbird, extending your limited flight capabilities by brushing against surfaces as you zero in on your destination.

During the early stages, there’s a great sense of freedom as you glide gracefully around the myriad landscapes. Jumping off a high point to gain as much speed as possible before pulling up to reach new heights gives you that happy queasiness normally found while riding roller coasters. Zipping through the introductory levels is joyous because there are so few restraints. Figuring out how to climb walls to boost the distance you can glide is fun because the world works as a playground waiting to be explored. Even just running across a smooth plateau is pleasant because the surreal architecture is so pleasing to look at.

It’s after you’ve learned the basics that the game stumbles back to earth. There are, of course, obstacles more dangerous than mere pillars. Poison ivy covers parts of the surfaces and death awaits as soon as you make contact with this dangerous substance. A steep challenge is a welcome addition to any platformer if the mechanics and level design can hold up to such stress, but the controls in A King’s Bird aren’t nearly precise enough to complement this level of difficulty.

That nasty poison ivy is situated in the most devious positions and it takes near-perfect execution to float by unscathed. A King’s Bird is undone by the very exuberance that made it so exciting early on. Gliding at top speeds through holes in pillars and across bottomless pits is fun if there is plenty of space between you and death, but as the walls close tighter around you, that fun begins to dissipate. It’s just too hard to consistently pull off the fine movement necessary to wind your way through these traps. So death comes early and often as you bang your head against the wall in the hopes of lucking your way past a truly aggravating part.

The fast speed of your hero clashes with the pinpoint precision needed to excel. A King’s Bird has a zoomed out view that makes your character appear small even on large screens, and this is great in the early going because it lets you see the obstacles that lay before you. But as the difficulty ramps up, and there are only a few pixels between life and death, that far-away view makes it mighty hard to see exactly what you’re trying to pull off. Furthermore, the game often stutters during the moments when you’re flying the fastest, and those slight hiccups usually mean an unceremonious death.

The game isn’t helped by the collectible little birds that hover around each level waiting to be nabbed. These white beings can be difficult to see against the light backgrounds, adding another layer of frustration to an experience that’s already overflowing with it. That free-flowing momentum that makes the early going so appealing is absent as you get deeper into the game. Instead of gliding gracefully through a level you instead spend a dozen lives to struggle to the next checkpoint before you calm your nerves, dry your hands, and try as hard as you can to get to the next checkpoint without throwing your controller.

A King’s Bird also suffers from a lack of real variety. The levels are basically indistinguishable from one another (aside from the color palette) so the game becomes a homogenous marathon to the end. There are a few levels where your gliding powers are stripped away, though the change isn’t as drastic as it sounds because you’re still using your momentum to clear gaps and clamber up pillars. And the lone boss fight is so chaotic at times that it’s hard to know which particle is you and which is a meteor trying to end your life.

It’s a shame A King’s Bird falters because the concept is so enticing. After braving my way through the dozens of increasingly maddening levels, I revisited the early stages and was once again transported to a dreamlike world where beauty and serenity shine through. Difficulty has its place in platformers, but there are games where too much challenge can distract from the core conceit. A King’s Bird locks you in a hopeless cage when all you want to do is fly. 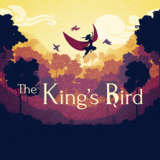 Tom took a half dozen hours to reach the end of A King’s Bird using a Steam code provided by the developer. He’s as shocked as anyone that such a pretty platformer could be so unwelcoming. 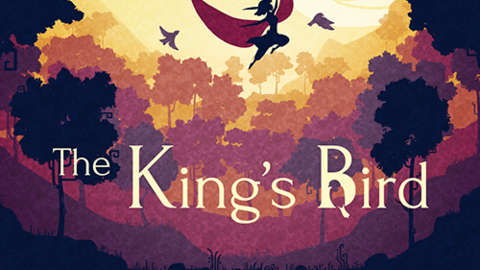 The King's Bird is a momentum-based precision-platformer that seamlessly combines parkour with aerial movement.