The King of Fighters XIII Review

From the ashes of its predecessor, The King of Fighters XIII rises to restore the series to its rightful place in the fighting genre spotlight.

When we last left The King of Fighters, things weren't looking good. The King of Fighters XII, which was released in 2009, looked beautiful and had a solid fighting system, but its dearth of single-player content and busted online functionally killed it for many players. Now, The King of Fighters XIII is here, and it addresses all of the issues the previous installment faced. XIII is an immensely robust game that adds a lot a new content to XII's solid mechanics, and it easily earns this series the right to stand alongside other fighting giants in the genre's spotlight.

As with its predecessors, The King of Fighters XIII features one-on-one fighting between two three-person teams. When one fighter goes down, the next is subbed in--after a brief but frequent loading screen--until one side's team is exhausted. In the ring, gameplay feels similar to Street Fighter III: Third Strike Online Edition. Though quicker than Third Strike, XIII shares the same fundamentals of smart positioning and timing. Positioning comes from proficiency with the game's movement options. With four types of jumps and a roll that can pass through anything but throws, it takes practice to navigate the battlefield quickly and efficiently.

When used well, these movement techniques make you feel nimble and keep the action focused on offense. You always want to be building momentum with fancy footwork and calculated strikes. But even at its most chaotic, the game still allows you time to think. There's a satisfying tension in planning your next strike or in deciding how to break the enemy's stride. XIII has its own rules of engagement, and understanding these rules--and when to break them--lets the game's personality shine. As with any strong fighter, the ebb and flow of advanced play is as much about strategy as it is about execution.

There are three main gauges to manage in the game: power, hyperdrive, and guard. In broad strokes, the power gauge focuses on offense; it is used for enhancing special attacks and desperation moves. Next, the hyperdrive gauge is for being stylish. You can burn this meter to cancel certain special attacks into others or activate hyperdrive mode. In this mode, your character can link together moves and build combos that aren't otherwise possible. Finally, the guard gauge depletes as you block attacks. If you let it run out, your character enters a vulnerable crumple state--so be careful.

The entire system feels very flexible. Each character has the tools for building devastating combos and quickly navigating the field. This uniform character design also carries over to vitality. Unlike in many fighting games, characters in XIII have the same amount of health, which means an attack will deal the same amount of damage no matter whom it hits. Each character's health gauge is broken down into sections for additional clarity. Once you learn how many sections a certain combo shaves off, it's easy to see when to cash it in and finish the match.

You can test your skills in Story mode, though if you're not familiar with Elisabeth Blanctorche, Ash Crimson, or why that one guy from Fatal Fury is here, then you're going to feel a little lost. This mode lasts only a few hours, but it has multiple routes and endings. Once "completed," a massive storyboard becomes available. From there, you can revisit different points in the tale and select alternate routes through it. There's also an Arcade mode that's heavier on the action and is where you can unlock the game's two secret characters.

For new players, the game has various teaching tools designed to introduce the basics. The tutorial and mission modes do a fine job of this, but they don't explain why these moves are important. Knowing the tactical merits of a hop versus a hyperjump is just as vital as their execution. This problem not only exists in XIII, but also in fighting games in general. For combo training, XIII's combo trials are well implemented. They display their inputs clearly, as well as feature demonstrations to aid execution and timing. In addition, characters have their own Time Trial and Survival modes to further hone your skills.

All of this preparation would be for naught if it didn't support a solid online offering. Thankfully, XIII does not repeat XII's mistakes. It offers an online experience that's smooth and stable, provided you find an opponent in the three-to-four green-bar range. If you fall below that, you'll encounter noticeable (though not unplayable) performance dips. When you finish, you can choose to save that match's replay for future viewing. While it's a nice touch, there is not a system in place for sharing or viewing other's replays. Sadly, Spectator mode is also absent in online play, which leads to a lot of bored players during group games.

Whether you're online or off, the game's presentation is simply gorgeous. The 2D character sprites fill up the screen with astonishing detail, such as the way their clothing flutters. The numerous stages are equally impressive--and infinitely more detailed--featuring hordes of overly excited spectators or a pack of elephants encircling the ring. There's even a color edit mode where you can alter your fighter's color scheme to your liking. All of these features, combined with the tightly balanced fighting mechanics, make The King of Fighters XIII a fantastic game that can easily go toe-to-toe with the heavy hitters in the fighting game genre. 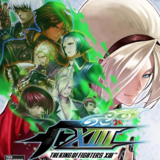 The King of Fighters XIII
Follow
$0.00 on Amazon
Buy