The Invincible Iron Man is one of the better examples of how a comic book should be transformed into a video game.

With all of the other comic book characters appearing in video games these days, it's only fair that Iron Man gets his due as well. Activision's latest Marvel Comics game is The Invincible Iron Man for the Game Boy Advance. Fans of the comic book will adore how developer Torus Games has brought all of Iron Man's cool superpowers to life. The only problem is that the game leaves you hungry for more. There are only eight levels, and you're finished way too soon.

The Invincible Iron Man is one of the better examples of how a comic book should be transformed into a video game. The basic design has you traveling sideways, upward, and back and forth throughout massive levels full of armed opponents. You can use Iron Man's repulsor blasts and shoulder tackle to knock out his enemies, but each use drains a little bit more of the costume's energy. When the energy is depleted, you'll need to collect energy items scattered throughout the level or wait for the suit to recharge. This adds a decent amount of strategy to the whole process, as you can easily run out of energy during a skirmish with multiple opponents or end up forced to recharge in an unsafe area. There are also power orbs located in various areas, which you can collect in order to unleash a massive chest-mounted cannon or to detonate a bomb that clears the entire screen of enemies. Iron Man's jump ability is actually a boost that you can use in combination with the shoulder tackle in order to fly short distances. There are many areas where you can employ this technique, which suggests that the developers took their time to consider the character's powers instead of just pasting him into a generic template.

Historically, the three biggest criticisms of action games have been that the levels are linear, the opponents are dumb, and the combat is repetitive. The Invincible Iron Man avoids the first two of these complaints with flying colors and earns a conditional pass on the last. While you do eventually have to locate the exit at the end of a level, getting there may take you in any direction, require you to backtrack, or sometimes necessitate the use of elevator platforms that take you to higher areas. As for the enemies, they don't do a good job of blocking your repulsor attacks, but they are smart enough to gather in groups or to lob their grenades into an area you're running toward instead of where you're currently standing. The combat is definitely repetitive though, although that seems to be by design. There are hundreds of enemies within each area, and part of the strategy is to know which ones to fight and which ones to avoid. You're also free to use Iron Man's boost and dash abilities to concoct your own flashy attack style.

Like the overall gameplay, the presentation is pretty slick. Comic book dialogue scenes introduce the characters and advance the plot at appropriate moments, while the backgrounds are downright gorgeous. The levels are set in military, jungle, snow, and factory environments. The environments all have multiple background layers, and the amount of incidental detail is exceptional. For example, you can interact with trees in the jungle environment in order to create new passageways. As for the characters, they are large, colorful, and smoothly animated. Iron Man is true to the comic book design in every way, and the enemies show a great deal of personality in the way they respond to your attacks. For whatever reason, the music and sound effects aren't quite up to the same level of quality as the visuals, but the various laser blasts and explosions are fairly loud, and the music fits the action without being annoying.

Although satisfying, The Invincible Iron Man will be a brief experience for most players. The levels are massive, but there are still just eight of them. Factoring in the three major boss battles, you can blast your way to the end in less than two hours. The choice of bosses is also a tad puzzling, since Morgan Stark, Blizzard, and Crimson Dynamo aren't exactly the A-list of Marvel Comics villains. The replay value of the game is extended somewhat by the opportunity to unlock artwork scenes by collecting the portraits hidden within each level. For the most part, however, this is one of those games where playing is the greatest reward. Even still, it's hard to escape the notion that the game is five or six more levels away from being a vanguard of its genre--although that would necessitate further variety in the play mechanics or at least the inclusion of a few more boss characters.

Fans of the Iron Man character or just comics in general will enjoy The Invincible Iron Man. It's one of the few side-scrolling action games that's genuinely fun to play and that also delivers a faithful interpretation of a familiar character. Just keep in mind that it's over far too soon. 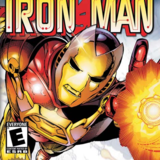