Hulk fans are sure to have a blast smashing their way through every destructible obstacle the game throws at them.

For as much as superhero movies have improved over recent years, the games based on the same intellectual properties haven't exactly kept up. Just look at Spider-Man, Batman, The Punisher, or the Fantastic Four--er, OK, maybe not the Fantastic Four--and then look at the games that have followed up on the hit movies. Generally, there's a pretty wide gap between film and game quality, even when the game itself isn't directly based on the movie. 2003's game based on The Hulk franchise suffered from a similar issue. While the game was mostly OK, it lacked depth, and it threw together too many hackneyed gameplay mechanics that just weren't conducive to an enjoyable experience playing as everyone's favorite angry, green hero. Thankfully, developer Radical Entertainment saw the problems with the original game and didn't give up, putting together a hugely improved sequel in the form of The Incredible Hulk: Ultimate Destruction. Featuring something of an open-ended structure, a bevy of crazy moves and destructible, well, everything, Ultimate Destruction places you in a veritable playground designed just for those who love the Hulk's methodology of destruction over discretion. Though the game does have its flaws, the fact that Ultimate Destruction does such a good job of actually making you feel like you are The Hulk makes its issues much more forgivable.

Ultimate Destruction isn't based on the Ang Lee Hulk film from a couple of years ago. Like THQ's recent Punisher game, it focuses more on the comic-book universe, putting together a storyline that brings such familiar characters as Doc Samson and the Abomination (aka Emil Blonsky) into the fold. There isn't an awful lot to the plot of the game. Essentially, Bruce Banner is already the Hulk by the time the game begins, and he and Doc are working on a way to try to cure him. Enter Blonsky and a cadre of government soldiers, who want nothing more than to wipe out our friend, Big Green. Clearly, this aggression will not stand, and through the several chapters of story the game presents, Hulk smashes whatever tries to stand in his way.

And smash he does. What Ultimate Destruction absolutely does best is give you a metric ton of ways to completely obliterate anything around you. Hulk starts off with some fairly basic punches and throws that let him do plenty of damage to the scenery around him, but as you play through the game, you'll earn smash points via your destructive tendencies, which can be used to purchase new moves. These moves range from humongous seismic bursts that explode everything within a 30-foot radius to crazy hammer-throw moves that let you whip tanks as if doing so were an Olympic event. Hulk is also armed with a number of "weaponizations," which are basically ways he can take things--like nearby cars, streetlamps, or what have you--and turn them into methods of mayhem. You can pick up buses and smash them into useful shields, rip cars in half, wrap them around your fists to effectively give Hulk his own pair of novelty "Hulk Hands," or pick up a nearby missile launcher and simply throw the missiles at oncoming helicopters. There are literally dozens upon dozens of moves to unlock, and almost all of them are an absolute riot. The game isn't exactly stingy with the smash points either, and even when you do run low, all you need to do is head to one of the game's main environments and go nuts.

During the game, Hulk takes up residence at a secluded, abandoned church somewhere in the middle of nowhere. But from there he has access to a few jump points, where he can literally jump hundreds of feet in the air to reach new areas, the primary of which are a major metropolis and the badlands (a barren desert with several military installations). Similarly to those of the Grand Theft Auto games, story missions are accessible from icons found in each area, and they are denoted on your map. The story itself is quite linear, as you're only given one story mission at a time. But in between story missions, you can run and do any number of a whole lot of available side missions, which earn you more smash points. These missions range from simple checkpoint races around the world, to rescue missions, to long-jump competitions with a giant monkey balloon acting as a parachute (we'd try to explain, but trust us when we say it makes more sense in the context of the game). There are a whole lot of these side missions, giving you plenty of lasting play beyond the scope of the story missions. And that's good, since there really isn't a lot of breadth to the storyline portion of the game.

The whole story probably won't take you more than nine hours to beat, but to its credit, the story packs in an awful lot of action into those nine hours. Periodic fetch quests and escort missions are complemented by some excellent missions of wanton destruction, and chapters are punctuated by some particularly good boss fights. The missions where you run around blowing everything up and punching the hell out of all manner of tank and anti-Hulk robot are generally the best parts of the game, as the escort/fetch quest/chase missions all feel a little hacked together...not to mention frustrating.

Ultimate Destruction is a tough game on the default difficulty level. In most cases it's an enjoyable level of challenge, rather than a cheap one, but there are some annoying sections. Large swarms of enemies have an ugly tendency to gang up at woefully inopportune times, often leading to situations where you'll be just on the verge of hitting a goal for your mission only to be wiped out by a stray barrage of Hulk-seeking missiles or giant mechs. Again, though, not all of it is cheaply difficult. The boss fights are almost all extremely satisfying, for instance, with only one in particular feeling highly overpowered.

Part of what makes the action so great is how well everything in the game controls. One thing that's held a lot of previous superhero games back is how few manage to make the crazy powers of a given hero easily controllable while still enjoyable to use. Ultimate Destruction gets this part extremely right. Want to make Hulk leap huge distances? Just charge up the jump button, and let him rip. Want to run up walls? Then just run into a wall, and the magic is done for you. You constantly feel like you can do just about anything in the game, making for battle sequences that feel a lot more open-ended than you might initially think. Running along the sides of buildings, picking up stray vehicles to be turned into any number of different weapon types, smashing through anything that happens to come into your path... It's all exactly what you would expect the experience of being the Hulk to be.

The only problem that gets in the way of the generally satisfying gameplay is that the artificial intelligence can sometimes act up. For starters, some enemies, like the smaller Hulkbuster mechs, can be beaten extremely easily by a couple of specific attacks via a fairly cheap exploit. Other times, the enemies will be locked into specific attack patterns that cause them to get hung up on pieces of the scenery, or they otherwise become incapacitated. But even with these blemishes, the whole of the game's action is a hell of a lot of fun when it's at its best; and even at its worst, it's still pretty good.

The game's audiovisual components are a huge factor in what helps it succeed. At the outset, you might not be initially impressed with the graphics. The character models are kind of smallish, the environments aren't exactly high in detail, and animations can periodically be kind of stilted. But once you get into the thick of a fight, it becomes abundantly clear that there are more to the graphics than initially meets the eye. The plethora of damage and explosion effects make for a truly chaotic scene, and the physics engine the game employs helps make everything fly and bounce around in some superexaggerated ways. To put it in no uncertain terms, everything in the game smashes and explodes real, real good.

All the chaos results in a few little frame rate drops here and there on the Xbox and PS2 (and more of them on the GameCube), but for the most part the game runs well. The camera tends to be the most annoying aspect of the visuals, as it has a tendency to go nuts when you're using the target-lock feature on fast-moving enemies. But otherwise, even it works pretty well. It's also worth noting that all three versions of the game support 480p, and the Xbox goes all the way up to 720p. Furthermore, all three versions look excellent when played in high-def.

The audio is great also--especially the sound effects. When you're running around as the Hulk crushing every single object you get near, you really get an excellent feel for it with the sound effects. Everything is booming, loud, and very pleasing to the ear, especially if you've got surround speakers. The orchestral soundtrack is equally great, hitting the right dramatic notes at the appropriate times, and the voice acting helps keep the story interesting all throughout. Noted actors Neal McDonough (Ravenous, Star Trek: First Contact) and Ron Perlman (Police Academy: Mission to Moscow, Blade II, Hellboy) voice Bruce Banner and Emil Bronsky, respectively, and other names, like veteran voice actor Cam Clarke and Richard Moll (Night Court, National Lampoon's Loaded Weapon 1), make appearances too. Both the name players and the supporting cast turn in equally spirited performances, and though the writing gets a little goofy in spots, the story largely holds up thanks to the quality of the voice work.

In many ways, The Incredible Hulk: Ultimate Destruction is exactly what a quality single-player adventure based on a license ought to be. It pays ample service to the Hulk fan base through numerous obscure references to assorted comic-book bric-a-brac and lots of unlockable materials, and it manages to get the game portion of the equation down pat, creating a world well-suited to Hulk and his destructive tendencies. Sure, it isn't the deepest, longest, or most technically proficient game out there, but fans of the comic book are sure to have a blast smashing their way through every destructible obstacle the game throws at them, and anybody else with a penchant for obliteration ought to at least give Ultimate Destruction a look. 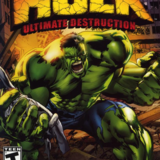