From a blind man's perspective, the Wii version of The Incredible Hulk is a mirror image of its Xbox 360 and PlayStation 3 counterparts. You control the giant green monster in a free-roaming, fully destructible version of New York City. The repetitive missions and devil-may-care structure make the transition intact, letting you wreak havoc on the streets if you feel like shirking your duty to save the city. Though the core mechanics are identical, what little fun that could be had by mindlessly terrorizing the people of New York has been lost in translation. The rudimentary graphics and cumbersome controls eradicate even the simple joys of causing massive chaos. By trying to cram the same sandbox experience onto a system with far less power, the Wii version loses what little charm The Incredible Hulk had. This abject mess should be avoided by even the most diehard comic-book fans.

The story shows Hulk's evolution from local monster who everyone wants out of their precious city to the lesser-of-two-evils abnormality who saves New York from an even greater threat. Half of the cutscenes are told through static screens featuring just a tape recorder and Edward Norton's tired voice, whereas the other half are poorly rendered cinematics that show barely recognizable versions of the stars from the movie. It's hard to get immersed in this tale of alienation and redemption when the actors sound so disinterested in the proceedings.

The visuals in Hulk are absolutely atrocious. The comically archaic draw-in and pop-up from the other versions are even more pronounced here, hindering not only your visibility but your fun as well. When you climb a building and look at the city beneath you, there is nothing but thick fog engulfing everything. It's often impossible to judge how far you must jump to land on the next building because you can't see it, which saps the fun of bounding around the city. When you're walking at ground level, people and cars will pop into view right in front of you and mysteriously disappear when they leave your sight. There is also a lot of clipping going on. You can toss cars straight through buildings, and you'll see Hulk's arm go clean through the backside of enemies, causing no damage. At other times, you'll reach out to grab an object that lies in front of you and it will vanish right before your eyes.

The thriving city that made the other versions fun in short bursts seem to have been overrun by a life-ending plague here. Streets are often completely empty. Where an abundance of cars and people once fled in terror, there are now only a few people and the occasional car lining the streets. The idea of rampaging around a virtual New York City is enticing, but when the population seems to have disappeared, it kills one's desire. It's boring destroying a city if no one even cares.

The control scheme has also made the transition to the Wii, but in a severely crippled state. There aren't enough buttons to properly mimic the layout from the other versions, so you'll have to go through some painstaking steps to pull off your full repertoire. For example, sprinting is executed by holding down the B button on the Wii Remote and the Z button on the Nunchuk, a less-than-intuitive scheme. Even more cumbersome are the super moves, which you'll have to use quite often. Here, you'll have to call up the move of your choice (healing, thunderclap, ground slam, or rampage) by scrolling with the directional pad, then frantically shaking the Nunchuk to charge it up, and finally hitting B to unleash it. Trying to pull off one of these techniques in the heat of battle is extremely impractical.

The camera controls are also awful. You can use the C button to center your view. If you hold it, you can lock on to enemies, which you will need to do if you want any sort of accuracy in your throws. However, the lock-on is completely broken. Not only does it take a solid second before it will recognize that an enemy is in your sights, but the game also quickly loses track of foes if you are attacked or if they move too quickly. If you want to freely move your camera, you'll have to hold the minus button and use the pointer. This method is so imprecise that it's hard to even keep up with an injured pedestrian who is slowly limping past your view. Trying to quickly find a fast-moving enemy or a power-up while falling off a building is nearly impossible. And there is no option to use the Classic or GameCube controller. You're stuck with the Wii Remote and Nunchuk combo, and it's clunky and unresponsive.

The story missions aren't loaded with variety, but there are some minigames and statistics-based feats to add a surprising amount of replay value if you somehow get sucked in. There are a number of unlockable Hulk skins to strive for, and you can earn more-powerful versions of your moves along the way. It is rather shocking that not only can you knock down famous New York landmarks, but that you're also actually rewarded for doing so. It's darkly satisfying to destroy Stark Tower or the Empire State Building; it's just unfortunate that the city doesn't react when you raze these structures. Hearing Tony Stark shouting an angry threat at the beast that toppled his home would have given some weight to these unforgivable destructions. Strangely, the Wii version doesn't have all of the landmarks from the other versions. For instance, the Bear Stearns Building is physically located in the game, but it isn't listed by name, and you won't be rewarded with a Landmark token when it's torn down. All told, there are 35 landmarks in the Wii version and 50 in the others.

The Wii version of The Incredible Hulk is a travesty. What little fun that could be had in the other versions of this game has been destroyed here, only to be replaced with glitchy graphics that won't even let you see the city, unwieldy controls that are neither responsive nor intuitive, and a desolate city that somehow makes destruction boring. Stay far away from this game. 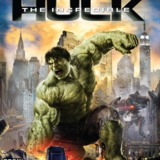 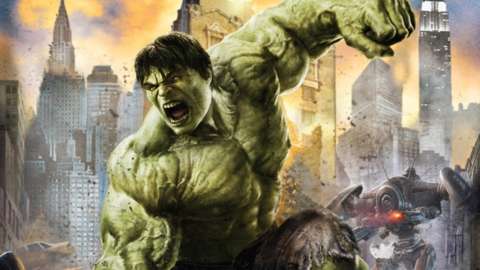 Bruce Banner and his mean, green alter ego are back for more destruction.