Store shelves are full of video games inspired by popular movies. Although many of these products find a large initial audience when a movie opens, the effects of the publicity often wear off quickly as buyers discover that their favorite new game is light on playability and is little else than a tie-in meant to make a quirck buck. You've probably played a few of these stinkers before: They're the games with 12 or 13 side-scrolling levels, combat that hardly reflects the character's special abilities, cheap boss battles, and flat artwork that's well behind the curve in terms of what the platform is capable of. While The Incredible Hulk for the Game Boy Advance isn't perfect by any stretch, it avoids many of the pitfalls found in other movie tie-ins. Furthermore, it's an enjoyable game that accurately represents the attitude and actions of everyone's favorite green monster.

The story takes place one year after the events in the movie, and it finds Bruce Banner on the run from the US military. In the early stages of the game, a mysterious villain known as the Leader becomes aware of Bruce's green-skinned alter ego and sends his army after Bruce. Your job is to help the Hulk escape the military, defeat the Leader's army, and eventually confront the Leader on his own turf. The plot is by no means original, but it's helped along by a healthy smattering of transition sequences drawn in Marvel's familiar comic book style.

Unlike typical comic- or movie-themed games, The Incredible Hulk isn't a brief experience. The cartridge clocks in at a whopping 33 levels and offers an equal distribution of fighting-, puzzle-, and survival-based missions. There are many opportunities to scuffle with soldiers, tanks, missile launchers, and helicopters. Hulk begins each level with a small repertoire of punches, but you'll gain new attacks and combinations as his anger state builds. Anger plays a significant role in the game. Hulk regains stamina by fighting enemies and destroying scenery. Conversely, when there's nothing happening onscreen, Hulk's stamina gradually diminishes. In this fashion, you're compelled to play aggressively.

Many levels are set up as puzzles or survival situations. In some areas, you need to locate and destroy generators so the Hulk can travel safely through corridors fortified with electrical flooring or steam vents. Many areas contain hidden passageways that you can discover by punching cracked walls. Hulk has the ability to lift up and carry small objects, such as barrels and crates, that you can toss at enemies or use to trigger floor switches. Sometimes, the only way to complete a level is to dash to the exit and avoid conflict. Confrontations with bosses are difficult and time-consuming, but not because they're set up unfairly. Each boss has a half dozen or so attacks and a single specific weakness that you need to exploit over and over again in order to whittle away his stamina. Since you have to work to defeat each boss, victory is all the more satisfying.

Fans of the Hulk and even just of action games in general will enjoy the overall variety the product has to offer. As you can imagine, the game's biggest problem is that the fighting simply gets old after a while, especially in stages where you have to backtrack through areas you've seen before. Thankfully, the game's three battery save slots allow you to take a break whenever you feel fatigued. You also have the option to compete against up to three of your friends in arena-style matches using the GBA's link cable, but this is a mind-numbingly repetitive mode that should be quickly sealed in a pine box and never mentioned again. Imagine a fighting game where the best strategy is to avoid your opponent the entire match. Not fun.

Another potential sticking point is that The Incredible Hulk doesn't really push the GBA to the same heights in terms of visuals or audio as other action games from publishers such as Activision, Konami, or Nintendo. The tilted isometric viewpoint offers a good view of the action, and most of the backgrounds have enough depth that they appear three-dimensional, but there really isn't much going on in the environment except for what the characters are doing. You won't see multiple layers of the background moving independently of one another--rivers don't flow, and torches don't burn. The character visuals are very nice, however. Hulk swings his arms with wild exaggeration, and enemy soldiers often lean into a crouch or perform a somersault before opening up with their weapons. As for the audio, the music is overly dramatic and repetitive, and the sound effects are drawn from a small set of gunshots and screams. Even though that's about what you'd expect from this sort of game, there's still plenty of room for improvement.

For those who know and like the character, The Incredible Hulk is well worth the purchase price and should offer many hours of entertainment. Vivendi Universal has captured the essence of the Hulk--comic book violence in all its forms--and provided an opportunity to unleash his rage in a manner that succeeds as a game. If you just want something to gawk at while the movie is still fresh in your mind, the game may not live up to your expectations, since it doesn't assault your senses with flashy visuals or familiar audio clips. That caveat in mind, The Incredible Hulk is one of the better movie tie-ins to land on the GBA to date. 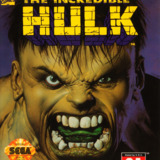