Like its predecessor, The Incredible Adventures of Van Helsing II bills itself as a "gothic-noir adventure." While there are too many pop culture references and too much comedic relief for the "noir" part of that label to stick, the general tone is one of grim expressionism, bolstered by some finely constructed action sequences. In fact, beyond its ham-fisted exposition and painfully slow start, there's little to hold the experience back from being one of the better action role-playing games in quite some time.

The Incredible Adventures of Van Helsing II is absolutely massive and packed with secrets and details that are easy to miss the first time around. You wouldn't know that from the first few hours of play, though. Van Helsing is remarkable in that it has one of the most annoyingly intrusive introductions in recent memory, yet explains almost none of the subtlety this game has to offer. Van Helsing II opens in medias res, but what seems like a potentially exciting start comes off as cluttered and ultimately confusing. The game picks up right after the conclusion of the last game, and you play as the son of the infamous vampire hunter Abraham Van Helsing. After felling the mad scientist that had terrorized the fictitious, industrial-era city of Borgova, you take over a resistance movement against the corrupt government. Your initial motivations aren't made clear, and the entire opening sequence is dominated by cutscenes that have weirdly nauseating cameras that wobble around while the main characters discuss detailed military strategy.

It's all a bit overwhelming, which is particularly unfortunate given how great the game becomes. A few hours in, you have access to your secret lair, a subterranean hideout that serves as your base of operations for the rest of your adventure. From there, you can marshal troops, craft new equipment, and generally help guide the resistance movement. Again, why exactly the movement is necessary is never made clear. You never see the real effects of the allegedly corrupt government, and there's no reason to empathize with the populace. That said, all of these pieces come together remarkably well, combining the straight action RPG trappings of the first Van Helsing with added gameplay modes.

From here, Van Helsing II is loosely organized into a few discrete chapters. For each one, you have a primary objective that supports the resistance movement's plan to take the city of Borgova. These are tied directly to the game's gothic horror inspirations and help build up the intensely supernatural world. Without a gripping narrative to serve as the foundation for this adventure, the creatures and environments are left to carry the experience. Thankfully, the art direction is just as substantial as before, and is largely supported by these quests to unlock power held by long-dead beings. The main quests provide plenty of excuses to venture into the wilderness outside the city and play in a variety of striking locales. Each of these places is also home to a variety of Easter eggs, which help each environment feel dense and populated. Upon the conclusion of each chapter, you're shown a few stats detailing your time spent, the percentage of the secrets you managed to unearth, and how well you did overall. Once you've seen the "chapter complete" screen, however, the preceding areas are lost to you for the rest of the game, encouraging you to be thorough in your search.

You don't have to deal with the big things immediately if you don't want to, though. Like before, there are plenty of supplementary quests for those looking for a break from the core game. The tower-defense minigame makes a return, with robust tools for managing waves and waves of baddies. You can also hire soldiers, upgrade their equipment, and build up a small army to run consistent raids for you. They can bring back valuable items and tons of extra cash, which you can reinvest in your war effort, or yourself. Various non-player characters also offer additional one-off quests that help further build out this surprisingly rich world, and yield some great loot for you and your companions. Finally, you also have some shops and crafting tools to help you get the best gear and tools for combat versus the weird, surreal, and undead monsters that roam the wilds outside of Borgova. That's great, because as you might expect from Van Helsing's action RPG scaffolding, combat is what this game does best.

Combat has improved dramatically since the last entry in the series, and that's primarily because of two small but vital changes. The first is that the two classes originally released as downloadable content for the first game are now packed in. From the beginning, you have three distinct archetypes, each with a dramatically different play style. The default hunter class is a melee-ranged fusion that harks back to Bram Stoker's original descriptions of the literary vampire hunter. The other two are a bit odd thematically because they represent two of the main types of enemies that you fight against: unholy magic users and engineers warped by "weird science." Even so, they add a lot of variety and are distinct enough to warrant spending at least a little time with each.

For my main run, I used an arcane mechanic. The class focuses on deploying robots, mines, turrets, grenades, and other corrupted machinery to dominate the battlefield. That's actually where I felt the second change to combat most: two additional skill slots. In the first Van Helsing, you played as a hunter that balanced ranged and close-combat weaponry using six main abilities. There was a clean duality to it that's retained for those who choose to take up being a hunter once again. I, however, found it much more exciting to constantly manage mines and robotic spiders to assist me in combat. I didn't invest much into boosting my health or defense, instead focusing on maximizing my attack-power-by-proxy. It added a bit of tension as well, knowing that if my machines started to fall, I'd need to rapidly get them back into action or face death. The extra skill slots made managing the chaos of battle more challenging but also more rewarding without teetering into the unnecessarily convoluted.

Van Helsing is coarsely granular. Some of its pieces don't work as well as they should, but much of that falls by the wayside when you're in the thick of things. It is stellar in spite of a few big missteps and the fact that, with the exception of the world itself, none of the experience feels cohesive. Between combat segments, Van Helsing and his ghostly companion, Lady Katarina, exchange snarky quips about pop culture and casual digs at one another. It's nice for characterization, but it's also anachronistic and fails to fit into the rest of the game. That's fine, though, because Van Helsing never takes itself too seriously. It's all part of the ride.

View Comments (62)
Back To Top
8
Great
About GameSpot Reviews 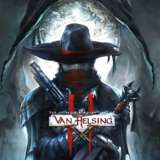 Dan Starkey hunted vampires, demons, and undead abominations with his trusty arcane grenade launcher. After being bored for the first couple of hours, he quickly warmed up to the gothic fantasy adventure.