The Hustle is a good example of why maybe it's not such a good idea to port handheld games onto home console systems.

Last October, Activision Value released The Hustle: Detroit Streets for the PlayStation Portable. As the first pool game available for the system, the game's moderate level of success was not because of its tight gameplay mechanics, great production values, or gritty storyline, but simply because it was the only pool game available for the system. Now, for some reason unbeknownst to the logical-minded consumer, The Hustle is now available for the PlayStation 2 and Xbox in relatively unaltered form. A few minor fixes here and there make the pacing of the game less irritating than it was on the PSP, but when you consider the number of glaring things the developers didn't fix when making the transition, and the fact that The Hustle is far from the only pool title available on either console, The Hustle starts looking a lot less appealing than it did just six months ago.

When you first boot up The Hustle, you quickly toss together a basic profile and character to represent yourself. There's some backstory here about your character's rise and fall from grace, but it's all meaningless filler. It's just an excuse to put you on track to play a lot of pool against a lot of seedy characters. You don't have to work especially hard to make that happen. Just plop yourself down in the first available pool hall and start challenging and accepting challenges from the roustabouts that occupy the building. You start out with only a few available challengers, and as you win more money and earn more respect (which is actually measured via a numbered percentage), more opportunities will open up.

It'll take a long time for that to happen, however. While you do eventually move on and periodically go up against some boss opponents, it's likely that most people will get a distinct sense of going nowhere fast for the first hour or two of play. You'll challenge the same guys over and over and over again, play a lot of the same pool games to boot, and you'll wonder where the hell this is all going. A more obvious way of measuring your progress would have been greatly helpful to counteract this feeling. It's also of note that The Hustle is a tough game to just pick up and play. There isn't really a quick-play option to speak of. You can jump into the story mode and play friendly matches against some opponents for no cash, but even there the number of games you can actually play is limited. There are a ton of different pool games and trick shots buried within the game, but it takes a painfully long time to actually be able to play any of them whenever you like.

The saving grace here is the pool itself, which is handled reasonably well. At first glance, the control scheme seems woefully awkward, but after a few plays, it becomes second nature. Instead of doing the standard console pool mechanic of making the analog stick directly emulate the movement of the stick for a shot (you can do that here, but the analog stick shot sensitivity, despite not being as awful as it was on the PSP, still feels mighty off), all you have to do is angle your shot with the left analog stick, then pull backward on the right analog stick to get a sense of how much power you want for the shot. Once you do, a meter will pop up on the screen. In it, an arrow icon will move up and down, and in the middle of the meter sits a white zone that represents an accurate shot. You want to try to stop the arrow in the white zone, which shrinks in size depending on how hard the shot is. It's tricky, but it works. If you do it right, the game will cut to a quick scene of your character lining up his or her shot, and then taking it. Despite it taking the action out of your hands, you still feel like you pulled it off yourself.

At times, The Hustle is too easy of a game. There is a constant aim guide available that shows the track of the ball you're aiming for, as well as the track the cue ball will inevitably follow. The readings aren't always precise, but most times they give you a very accurate understanding of where the balls are going to go. Inherently that's OK, but it makes a lot of the other options, like putting English on the ball and setting cue elevation, mostly unnecessary. Occasionally a shot will pop up that requires one of these things, but most times all you need to do is find the right angle and knock it in. The simplicity isn't necessarily a terrible thing, but if you're looking for a fully accurate and challenging pool simulation, this isn't it.

On the PSP, the cutscenes that played between shots were a big headache, mainly because the load times were simply atrocious and entirely too frequent. The load times are basically gone in the console versions, although some new issues present themselves. For one, it's pretty apparent that the game's visual assets were never intended to go to this high a resolution. The character models for the main pool players are merely blocky and ugly (and frequently clip right through one another while taking shots), but the crowd graphics are quite possibly the most hysterically awful crowd visuals ever. They're just 2D character cutouts that have one point of articulation--a detached torso that swings back and forth like it's on some kind of horrible pendulum. On the PSP's smaller screen, details like this just weren't obvious. Here, they're in your face and impossible to ignore. It's amazing, but The Hustle has gone from a good-looking handheld game to a poor-looking console game in practically no time at all. There's still some atmospheric quality to the game, mind you. It does a decent job of presenting a seedy, grimy pool hall, and some of the background chatter (such as the guy who just yells, "This is bull****!" at frequent intervals) is hilarious. There's also plenty of cheesy bar-band music to go around. But while all these things lend themselves toward the game's chosen style, it doesn't necessarily make them good.

The one thing The Hustle: Detroit Streets offers on consoles that it did not on the PSP is online play. You and an opponent can go online on either system and duke it out with the usual assortment of pool games--at least, in theory you can. The hard part isn't getting the game online, but actually finding someone to play against. We spent multiple days looking for opponents, and never found anyone on either system. That probably doesn't bode well for the long-term multiplayer experience.

While The Hustle was already kind of a tough sell on the PSP, given its multiple caveats, it's near impossible to recommend the game as it appears on the PS2 and Xbox. This isn't some slickly written, The Color of Money-esque tale of stylish pool hustling, nor is it a particularly detailed or compelling game of pool. It was more compelling on the PSP since no one else had even made an attempt to represent the game on the system up to that point, but with dozens of different pool games available for consoles at a near-universal budget price, many of which are vastly superior in terms of gameplay quality, The Hustle: Detroit Streets becomes thoroughly unnecessary. 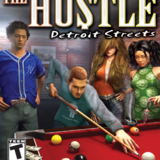 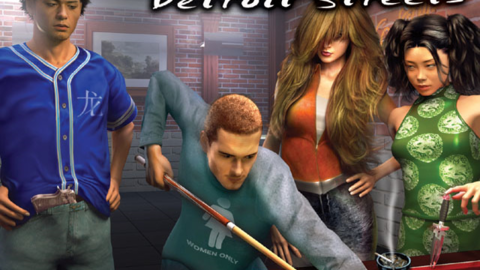 The Hustle: Detroit Streets is a pool game in which you play as Jack Stone or Kat Hudson. Guide them through the pool halls of Detroit in their quest for respect and cash.