Micromanagement and repetition really bog down this original but unfulfilling game about directing the lives of people trying to make it in the Middle Ages.

While nobody expects a game about building a family dynasty in medieval Europe to be an action-packed thrill ride, The Guild 2 is so detail-oriented that it should be on meds for obsessive-compulsive disorder. Much like its predecessor, 2002's Europa 1400: The Guild, this is a micromanager's dream. 4Head Studios' manner of blending The Sims-style babysitting with Middle Ages economics remains original, but the gameplay is so repetitive and meticulous that it will even wear down medieval history buffs.

As in Europa 1400, the focus here is on setting up a family. You begin with a single peasant and must gradually move him up the ladder in society by starting a business to make lots of money, acquiring a wife, having children to carry on the family name, and even running for public office. A lot of the lines between genres are crossed. Your characters have role-playing game-style ability scores, classes (patron, scholar, craftsman, and rogue), and special abilities (complete with funny line-art illustrations reminiscent of those in the Fallout games). Your character also gains experience points and levels up like in a role-playing game. But you additionally construct and upgrade buildings, gather resources, and produce goods like in a real-time strategy game. And, you'll also oversee businesses like in an economics-simulation game. There is even a bit of action involved where you can hire guards to fend off highwaymen who are intent on robbing your goods-laden carts, or you can become a rogue and rob such shipments yourself.

Campaigns all play out in 15th century Europe on maps that represent the English, German, and French countrysides. There are a total of eight maps in the game, although they represent variations on just three general locations. The locations are mainly differentiated by building changes in the starting towns and some adjustments to the opening economic conditions. In Hills of Lyon, for example, you deal with a rich region that forms the hub of five trade routes. But in Alamannia, you have to contend with an economic slump that has been caused by the effects of trade-disrupting bandits. Goals can also be changed in each region by switching among four modes of play. Dynasty is the most enjoyable mode because it's open-ended and the most lifelike. Extinction, time limit, and assigned missions (which involve pretty basic goals like getting rich and becoming a top criminal) are more restrictive and feel more gamelike, although they are reasonable options when you don't want to leap into full-blown, dynastic family building.

All these options are available for play in multiplayer mode, so in theory, you can have some pretty lively online contests with fellow wannabe burghers. We tried to find an online match for a full week after the game was released in North America, but we never found any games in progress. So either there are technical problems with the game, or very few people have taken their dynastic ambitions online thus far.

Although it sounds like The Guild 2 has a lot going on, it is pretty limited in scope. The game centers on repeating a handful of tasks over and over again, even though there are numerous occupations available for each of the four classes. Patrons, scholars, and craftsmen make money in similar ways, by crafting goods from raw resources and selling them in town marketplaces. Scholars are the game's professional class, serving as priests, doctors, and the like, but they still manufacture goods like the parchment and holy water that are cranked out in churches. Food-producing patrons work in the fields to cultivate crops and raise beef cattle for sale. Or they run pubs and inns, making and selling booze and food. And craftsmen make their money by crafting metal goods like daggers in foundries or by making clothing in mills.

All these careers are very similar in the way that they play. Even worse, acquiring raw materials, making finished products, and selling goods in marketplaces require painstaking effort. You can automate buildings and carts, but the pathfinding is awful. If you let carts go on their own, they inevitably run into pedestrians and slow to a crawl (it's like there's a narrow, invisible track for all traffic on roads), as well as take circuitous routes to and from markets. So you're stuck with manually moving a lot of workers and carts from your mills, foundries, churches, and assorted other places of business to the marketplace and back. It never gets overwhelming because the pace is moderate even when you've become a medieval tycoon, but it's never a whole lot of fun either. And movement isn't without problems, because the game is buggy and frequently requires numerous right clicks before it accepts destinations.

It's a little different playing a rogue because your objective isn't to make goods but to swipe them. Instead of building a business, you set up a robber's nest, then hire some thieves and assign them to country roads where they can ambush loaded carts. Or you can assign them to town businesses where they can extort protection money from law abiders. As you might imagine, this is more enjoyable than the straight life. But it's viable only in rich areas that have lots of carts to rob, and you still have to haul your ill-gotten gains to market, so it's not like you're completely evading the mundane shopkeeper stuff. Also, you can run into a string of bad luck where your thugs constantly get killed by guards, which keeps your coffers low on cash and puts you in front of a judge more often than Michael Jackson. Still, if you can get rolling and stash away some money, you can run your burg like a mafia kingpin, robbing locals, killing rivals, and setting up family members in top political posts.

Even when you get your nose off the old grindstone, the game continues to repeat itself. The personal-relations engine, where you kiss up to other people to enhance your reputation around town and court a husband or wife, has very few options. When playing up to, say, a town official to curry favor and gain a vote in an upcoming bailiff election, you throw out compliments and bribes. If you get enough money out there, you'll generally build a solid network of friends and guarantee an election win. If you want to woo a hot babe, you dish out compliments and give gifts before popping the question.

And the personal interactions are a long way from realistic. Courtship is marked by women who giggle like morons and guys who make out like bandits with lines like "Hey, you're really built." And you can score bonus points with strangers by kissing them out of the blue or asking them to take a bath with you. Good luck trying that with the staff at Medieval Times. Bonus points to 4Head for trying to inject some humor into a pretty serious game, but this stuff just isn't going to have people rolling in the aisles, and anyway, it mainly draws attention to how character interaction is pretty shallow.

Yet there are aspects of The Guild 2 that are compelling. Even though repetition weighs everything down, every so often you're taken by surprise by some nifty feature. Towns do seem like real places at times. Running for office can be a real kick because you typically need to shake a lot of hands and work voters to move up the ladder. And, you always seem to have mortal enemies who will do anything to ruin your reputation, from dragging you into court on made-up charges to robbing or torching your house or business.

And 4Head has done a great job of bringing medieval towns to life. Everything is nicely rendered in an attractive 3D engine, so you get a good look at the cart-shuffling and goods-manufacturing citizens, as well as those who are milling about the streets. Visuals are a bit behind the times, with characters that are marred by blocky faces and stilted animations. But the clothing styles, interiors and exteriors of buildings (most interiors are gorgeous, particularly the town hall), and even the haircuts look like something out of a History Channel documentary. The audio doesn't add much to the presentation and is marred by negligible sound effects, forgettable musical, and character dialogue that consists of a few lines of English and a smattering of Latin.

Unless you want to play Robin Hood, The Guild 2 is pretty much a lesson about the drudgery of toiling in a medieval workshop. After playing this game for an hour or so, you'll thank whatever deity you believe in that you were born a good 600 or so years after your serfs. While you will certainly learn a few things about the Middle Ages in the process of hammering out daggers and directing monks on how to make parchment, the excess of repetitive tasks means that this isn't edutainment at its finest. 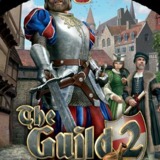 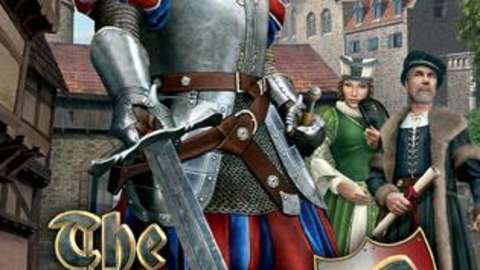 JoWood is developing the sequel to Europa 1400: The Guild. Like its predecessor, The Guild 2 is a real-time strategy game.

Teen
Blood, Sexual Themes, Use of Alcohol and Tobacco, Violence