The Golden Compass is just another family-friendly film cash-in with few redeeming qualities.

The Golden Compass for the Xbox 360 and PlayStation 3 owes a lot to 2005's The Chronicles of Narnia. Like Narnia, it is a game based on a film based on a fantasy novel, and it even goes so far as to summarily lift hunks of gameplay directly from the earlier title. Yet for some reason, the designers picked all of the bad stuff while leaving behind the good. The result is a muddled mishmash of gameplay ideas that lacks focus and certainly lacks any sense of fun.

If you aren't familiar with the accompanying film, or the Philip Pullman novel on which it's based, you will probably be rather confused by the game. As Lyra Belacqua, you seek to save your friend Roger from the grasp of evil folkloric kidnappers known as Gobblers. Lyra is accompanied by her daemon Pantalaimon (or Pan, for short), who is the physical embodiment of Lyra's soul, and she is occasionally joined by a hulking armored polar bear named Iorek. Lyra also possesses an instrument called an alethiometer--the golden compass of the title--which can answer any question that she asks it. You'll figure out what's going on in bits and pieces and with the help of short clips from the Golden Compass film. Yet you'll likely never care about Lyra or her companions, and important chunks of exposition are completely glossed over, leaving you wondering what's going on or why you should care.

Gameplay is a mess. There are a lot of ideas at work here, but none of them pan out all that well. First up: exploration. You spend a lot of time roaming about doing busywork, particularly in an insanely long and boring sequence on the Gyptian vessel. The highlight during this level is--get ready for it--mopping the deck. In other levels, these tasks may have you hiding under furniture or throwing snowballs, but none of them are interesting, and they are generally sliced up by cutscenes and other gameplay mechanics.

Platforming ushers in more mediocrity. Granted, there are some nice ideas here. Lyra can use Pan as a grappling hook and latch on to poles for simplified Prince of Persia-inspired swinging, and the duo can glide for short distances. There are also beams to keep your balance on as you cross, though these moments seem to take forever, since Lyra walks across them so slowly. The controls are super-loose, which is deadly on the dock level--one of the dumbest platforming sequences ever dreamed up. Not only do the slippery controls make Lyra a pain to maneuver, but you can't manually control the camera, which makes it impossible to judge distance. Even worse, the camera has a tendency to move on its own in the middle of jumps and balancing acts. Expect to reload this level countless times, while cursing the designer who created it.

The Golden Compass relies heavily on timed button sequences, already one of the most overused mechanics in modern-day games. Attacked by a giant bee? Press some buttons in the right order. Need to push over an ice bridge? Press some more. Even some boss fights are won in this manner. There is some action buried in here, though it's found mostly in the game's first and final levels. Playing as Iorek, you'll paw through three types of enemies: witches, Tartars, and wolves. Once you build up enough rage by using standard melee attacks, you can pound the ground to do extra damage. You can also hold two buttons down to grab an enemy and fling it around, but for the most part, you can defeat this tiny assortment of foes by mashing a single button. Some levels are capped by boss fights, which aren't hard, but thanks to the lack of player camera control and the shoddy hit detection, they're plenty annoying.

There are still more elements at play. Sometimes Lyra will try to deceive other characters, which requires you to perform a set of minigames. Some of these games function properly, at least, such as one where you push the left analog stick in a whack-a-mole variant. Others are simply terrible and are so poorly explained that you may have no clue how the minigames even work the first few times they appear. There's also the matter of the golden compass itself. Lyra can ask it questions, and the accompanying minigame consists of keeping a reticle centered on the compass with the left analog stick while executing (you guessed it!) another timed button-pressing sequence.

Even the visuals can't capture the fantasy magic of the film or novels. Animations and environments are crude, textures are muddy, and there is absolutely no imagination to be found in the bland art design. There are also some weird graphical bugs, such as blinking polygons and pixelated seams. Sound fares no better. The musical score is fine, if unmemorable, but most sound effects are either embarrassingly clunky or missing entirely. The voice acting is serviceable, but there are times when the same character will talk over his or her own dialogue.

Initially, the wide variety of gameplay elements make it seem like there's going to be a lot to do in The Golden Compass. Unfortunately, most of these facets are too repetitive, too frustrating, or too boring to keep anyone's interest, young or old. So, perhaps unsurprisingly, the game is just the latest in a string of movie tie-ins that sacrifice good gameplay for the sake of a quick buck. 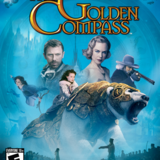