The First Templar draws you in with interesting characters and rhythmic combat, but technical foibles can lessen your fun.

Two thousand years ago, Jesus drank from a cup. Such a commonplace action may seem trivial, but it transformed an ordinary chalice into the Holy Grail. This sacred object has fueled the desire of countless historians through the years and has wormed its way into just as many fictional tellings of its supposed powers. The First Templar uses the unimaginable delights promised by the Holy Grail to push you through this action-focused role-playing game. The Knights Templar, sworn protectors of this coveted prize, prove they are as susceptible to temptation as every other person, and though the story provides enough twists to stay interesting, it's the varied gameplay and pleasant visuals that make this a journey worth taking. A dearth of items means you're stuck with only a few weapons and outfits for the whole game, and spotty collision detection can hound your progress at times. But The First Templar rises above these problems to create an enjoyable adventure through the turbulent 13th century.

The Holy Grail is a siren song that's difficult to get out of your head. Whether you want to steal this precious artifact for altruistic or selfish ends doesn't matter; it's worth dying for. And it's certainly worth killing for. You assume the role of the valiant knight Celian. The cross emblazoned on his chest is more than just a symbol; it's an outline for his way of life. Peace and well-being are his guiding ideals, though he isn't afraid to bloody his sword when evil presents itself. He is joined in this adventure by two other would-be heroes, though neither is as unrelentingly pure as the protagonist. Roland is a fellow Templar whose abrasive persona makes him a poor diplomat at best. Marie is loyal to her friends, but she rarely offers help for those in need. There's a believable repartee between these characters that makes them easy to grow attached to as you accompany them on their journey. Surprisingly, there are bits of humor sprinkled throughout your exploits. Non sequiturs such as "We will not negotiate with marauders" crop up at unexpected moments, and they provide levity to a mostly serious tale.

Combat is the focus of this roughly 12-hour-long adventure. Though the bulk of your attacks are simple sword strikes, there is more complexity than just swinging without a clear plan. Enemies are keen on slaying anyone who attacks without forethought, and it takes only a few solid hits in the early going to arrive at death's door. Because of this, you need to balance your offensive attacks and defensive maneuvers to stay alive. Blocking and dodging are an integral part of your repertoire, and smart use of these along with sure-handed sword strikes gives combat an enticing rhythm. If you time your swings correctly, your blows become more powerful, so it's important to keep your cool instead of mashing away as fast as possible. You unlock more attacks as you earn experience, and these help keep things varied. A shoulder charge or a spinning whirlwind gives you room when you're surrounded, and a two-handed strike can smash a shield in two. There isn't much challenge once you understand how to fight, but The First Templar stays interesting partly because of the flourish kills you perform at random intervals. Crashing your shield down onto someone's esophagus or performing a karate kick of death provides enough thrills to keep things moving.

There are two people in your party at all times, and you can switch between characters whenever you want. Because you have Celian for the entire game, he's usually stronger than the other two, with a more varied move list, so it's more fun to control him in combat. What isn't fun is the collision detection, which is woefully inconsistent. Running away from enemy attacks isn't always an option because you can get hit even when you're clearly out of range. This can be overcome by rolling or blocking, but it's annoying nonetheless, and this problem surfaces in other aspects of the game as well. A decent chunk of the adventure involves avoiding traps, and you can be burned by fire or stabbed by spikes even if you're a healthy distance away. Finicky collision detection is not a huge issue because you have enough health to avoid a few brushes with death, but it can lead to frustration.

Despite this technical problem, the forays into other activities do a good job of varying the pace. You run through decrepit caverns pulling switches and lighting torches, and the well-worn ground these actions cover conjures deja vu in the early going. But navigating these underground ruins is not always as straightforward as it seems, and figuring out where to go next can be eminently satisfying, especially in the later levels. You often need to split up your characters to get past obstacles, and going alone can be mighty stressful when your health is low and there are spiked columns closing in. Aside from these puzzle sections, there are sequences that emphasize stealth. Once you enter stealth mode, you can see your enemy's line of sight on your radar, and if you sneak up behind him, you can snap his neck. And you don't have to worry about failure if you're caught. The entire camp will most likely be awakened to your presence, but you can always fight your way out. Throwing pots to distract your foolish foes is the biggest twist to the standard formula, but it's not any surprising or innovative elements that make the stealth sections fun. Rather, it's the breezy and welcome change they offer from the hack-and-slash action that ensures your adventure never become stale.

It's a shame that variety doesn't extend to your armaments. You unlock a handful of new weapons throughout the course of the game, but they don't have stat modifiers, so you have only slight visual differences to look forward to. The same rules apply to your armor. Each character has a few different outfits to unlock, but the only thing that changes is your outward appearance. It's disheartening that there aren't lots of items to hunt for because the sprawling levels urge you to explore every branching path you come across. There are hidden treasure chests (that usually contain attribute buffs) and bonus objectives in every area, and figuring out how to scour every inch of the level provides its own rewards, even if the tangible offerings aren't up to snuff. Most places can be discovered by straying from the most obvious path, but there's one investigative tool that is as useful as it is silly. In certain places, you can push a survey button that causes footprints to appear on the ground. Following glowing white shoe prints makes it feel like you're hunting down Casper the Friendly Ghost, and it's hard not to laugh when these prints appear even in a murky swamp. Exploration is a strong point in The First Templar that makes even slow moments engaging.

If you break down the individual pieces of this budget-priced RPG, there isn't much that hasn't been done before. The basic structure feels like many other games, and the combat hardly reinvents the wheel. But there's an enticing charm that makes it difficult to pull away once you begin your journey. And you can even play through with a friend, though the execution is sadly lacking. There's no drop-in/drop-out option, so you need to start a new session if you want to investigate these lands with a buddy. There are small problems swirling around the periphery of this game, but none of these issues can completely derail your enjoyment. The First Templar is a fun and varied chase for one of the most sought-after items in existence. 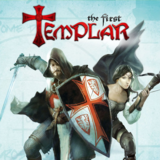 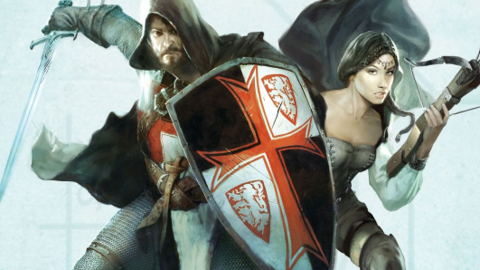 The First Templar is an action-adventure game that returns the player to the Holy Land during the Crusades.