The Fast and the Furious Review

Aside from the name, this street racer has little to distinguish itself from an already crowded field.

If there is one force that can be credited for thrusting modern street racing into the limelight, it's the 2001 film The Fast and the Furious. The Vin Diesel/Paul Walker movie's slick sense of style and glamorization of illegally racing highly modified production cars were cribbed almost verbatim by games like Need for Speed Underground and the handful of uninspired also-rans that followed in NFSU's wake. Namco Bandai and Eutechnyx finally squeezed out a game based on The Fast and the Furious for the PlayStation 2 last year, and now seven months later we're being treated to the predictable PlayStation Portable version. The irony here is that this game feels like one of those uninspired also-rans cribbed from The Fast and the Furious in the first place. It's not an entirely bad street racer, but it does nothing new, and it makes pretty lousy use of the license.

The game takes a stab at relevance by basing itself largely on the most recent film in the franchise, The Fast and the Furious: Tokyo Drift, and accordingly, all of the driving takes place in and around Tokyo. Though you'll see the names of characters from the films dropped on occasion, the connection isn't overt, and the game doesn't really have a story of its own. You play as some nameless street racer, and your existence revolves around beating each member of all the different crews in Tokyo, along the way earning a lot of money to be spent on more cars and upgrades.

The Fast and the Furious is strictly about one-on-one races—which take place either on the Tokyo freeway system known as the Wangan or in the winding hills outside Tokyo known as the Touge—and where you race influences the racing style. The Touge is filled with the kind of hairpin turns that make drifting a necessity, while the Wangan is mostly straightaways littered with traffic. All across the city you'll find various hot spots where the different street-racing crews are based, and from these different hot spots you can challenge anyone in the crew to a race of his or her choosing, though there aren't that many race types to choose from and most are finished in well under four minutes. On the Wangan, there are basic point-to-point races, as well as top-speed races that simply challenge you to achieve a higher top speed than your opponent before the end of the track. On the Touge, there are drift battles, where you're scored based on how well you drift around corners, and grip battles, which is just another name for the same type of point-to-point races you'll do on the Wangan.

For a game called The Fast and the Furious, the game is frustratingly slow from the start. The cars you can initially select are painfully sluggish, and it's nearly impossible to do any worthwhile drifting. Additionally, there are only a few crews for you to challenge from the beginning. It can be frustrating to bang away at opponents who simply outmatch you, though just because you beat an opponent doesn't mean you can't race that opponent again. With a little patience, you can take on the same inferior opponent over and over again, racking up the necessary bankroll to get a better car with some high-end upgrades. In fact, there's an early top-speed race that pays well enough that after a half-dozen repeated victories, you can buy a car that will beat any of your opponents in the foreseeable future. The game encourages you to maintain two separate rides, one for straight racing and one for drifting, but by gaming the system, you can easily build a single car that capably suits both needs. And just like that, the game goes from feeling incredibly punishing to offering no challenge whatsoever.

There's an open-world thing going on in The Fast and the Furious, and in between crew challenges, you can drive around the city, hitting various hot spots, dealerships, and tuner shops. However, you can just as easily pull up the game's city map and instantly warp to a specific location, further shrinking the game's already streamlined, miniaturized take on Tokyo. There are a total of 80 different crew members for you to challenge, as well as 40 racers you'll meet out on the open road, whom you can challenge to a race on the spot by flashing your headlights. It's a good amount of racing, but even early on it seems like you're just racing on the same strips of road over and over again.

To its credit, the game does feature a great variety of licensed production cars and aftermarket parts, with a focus on Japanese makes and models, which adds an air of authenticity to the game. In addition to loads of performance enhancements, you can customize the look of your cars with body kits, rims, spoilers, layer upon layer of vinyl decals, and a veritable rainbow of paint colors. For all the visual customizing you can do, in the end it's not very satisfying, due to the game's jagged presentation.

As is rather popular within the genre of street racers, it's eternally nighttime in The Fast and the Furious, and artistically, the game does a decent job of presenting you with a cool, neon-tinged vision of Tokyo. Unfortunately, on the technical side, the game can't support that vision. Cars tend to look like boxy approximations of their real-world counterparts, and the colors always seem to look flat, with lots of color banding and low-res textures in the environments. There's some wicked aliasing, too, which fuzzes up the horizon to the point that it's difficult to tell where the road goes beyond a couple hundred yards ahead of you. The frame rate is also real choppy, something that the game tries to cover up with a screen-rattle effect, though the constant shaking just makes it that much harder to look at. Save for some really unnatural-sounding squeals that you can get out of your tires, the sounds of the cars are unremarkable. The licensed soundtrack gets dragged down by some songs that sound like they're there on behalf of the marketing department, but there's also some good dark electronic music and Asian hip-hop that's more in line with the tuner feel.

More than anything, The Fast and the Furious evokes a sense of indifference. The PSP already has a wealth of similarly styled street racers, several of which offer a greater variety of driving, some semblance of a story, and a slicker presentation. Those looking for an extension of the films will be sorely disappointed, and those looking for some solid street racing have no shortage of other, better options. 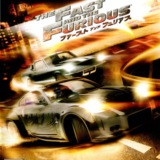