The Fancy Pants Adventures' quirks are overshadowed by its breezy cooperative play and stylish attitude.

The stick-figure star of The Fancy Pants Adventures takes his moniker seriously. Throughout this cartoonish platformer, you unlock new weapons, hats, and, of course, pants. Our hero wears pink, purple, and plaid with panache, and he slides along curved slopes with equal style. He likes to stay in motion, and certain sequences feel enjoyably effortless as you leap from springboards into the air and coast down steep slopes like a gangly Tommy Moe. Unfortunately, the brakes are sometimes put on in traditional platforming sections, in which the slipperiness that makes some levels such a joy becomes a frustrating liability. The clunky combat feels equally out of place in a game that relies on speed and momentum to deliver its thrills. Nevertheless, The Fancy Pants Adventures is a fun and affordable (800 Microsoft points/$10) romp through several colorful worlds, and adding a buddy or three to the mix opens up some welcome opportunities for cooperation and hysterical harassment in equal measure.

Your avatar may only be a stick figure, but he's an agile one. As in most 2D platformers, you (usually) travel from left to right, jumping across chasms, navigating swinging platforms, and nabbing collectibles (in this case, squiggles and stars). However, this man of the beautiful britches is not content with just these pedestrian antics. As you run down hills and across ramps, you gain momentum to zoom through half-loops and fly through the air without a care in the world. The way your spindly hero somersaults during long leaps or flails his legs in freefall adds to the sensation of careless freedom. For that matter, so do the simple but vivid environments, which look as if they were crafted by a precocious 9-year-old kid with crayons and colored pencils and then attached to the refrigerator with magnets. That may not sound like much of a compliment, but the hand-drawn look of the levels is a good backdrop for the game's rapid rhythm.

Both the main Story mode and the two additional worlds you unlock often make good use of this momentum-based movement. You might slip smoothly from one looping run to the next, bounce onto a springboard, and then leap from wall to wall, snatching up squiggles and periodically dropping on a spider's head to rid the world of this eight-legged menace once and for all. Or in a hidden challenge level you discover, you might prance and swing about, earning points for looking, well, all fancy. Every so often, however, The Fancy Pants Adventures slows things down and presents a more traditional jumping section, such as one toward the end of the Story mode in which you must leap over spikes and land on moving planks. Suddenly, the momentum that works so well for the parkour-like moves becomes a frustration. You land on a platform, only for Mr. Ants-in-His-Pants to keep running and slide right off, or you press the jump button toward the end of a run only for him to ignore the command, even though his feet are still clearly in contact with the ground. The physics-based movement works well when the level design supports it--and not so well when levels require greater precision.

The combat, too, musses with the pace. Armed with a pencil, fork, or some other instrument of stabbing, you poke at pirates and snails or charge up an attack for a heavier strike. The poking feels sluggish and awkward, and it isn't particularly fun--certainly not compared with the far more rewarding route of jumping on top of frogs or ninjas and then kicking them off the screen entirely. Unfortunately, combat is required in certain places, such as in a couple of boss fights against a pirate captain with a (literally) snappy rainbow-colored beard. Happily, combat is less intrusive in the two unlockable worlds, where you are more concerned with kicking snail shells into goals than whacking on spiders. And if you bring a few friends along with you, the odds of having a blast vastly increase.

The Fancy Pants Adventures supports up to four players both online and offline, and if you want to collect all the hidden stars, you'll appreciate the assistance of your friends. You can jump on each others' heads for boosts onto high platforms, which leads to some hysterical moments where you might sprint forward while a friend hops on your noggin all the way. Another fun twist has to do with how you are encouraged to cooperate when nabbing squiggles. One player must first pass over squiggles for them to fade into full view, and the player behind can then grab the fully materialized object. This inspires you to dash behind your partner, synchronizing your moves like well-practiced acrobats. If you're more into tormenting your friends than teaming with them, you can smack on them with your candy cane for a few laughs (and squiggles) and leap onto their heads at inopportune moments. As long as you aren't getting playful in the few areas where you can fall to your doom, such occasions are more likely to cause giggles than grief. Nevertheless, there are still instances of unwelcome grief in co-op play. The camera can't always keep up with multiple players, which makes a few optional challenges less than enjoyable because you might not be able to see spinning blades or other important elements until you are directly upon them.

Competitive players should enjoy the included races, in which opponents show off their smooth moves while speeding to the finish line. Some of these challenges are particularly good, requiring you to string wall jumps, speedy slides, and springboard leaps together in quick succession. The other competitive mode is a king-of-the-hill variant, a chaotic mode that relies on the game's odd combat and is, thus, best left unconsidered. But in spite of its missteps, The Fancy Pants Adventures is an enjoyable way to spend a few afternoons, seeking out hidden goodies and earning new pants ("Check out my neon green shorts!") and hats ("Look--a chicken head!"). It doesn't soar into the stratosphere, but it coasts along pleasantly enough that you'll enjoy the ride. 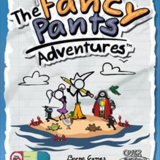