The Experiment overcomes its clichéd beginnings with original gameplay.

Since being stuck in a strange place with no idea who you are is such an ancient gaming cliché that it should be drawing social security, it's tough to warm up to The Experiment (also known as Experience 112). But developer Lexis Numerique manages to put together such a unique take on the "Who am I?" story gimmick that this tale feels awfully original. A secondhand control system that essentially breaks the fourth wall, an innovative interface, and loads of spooky scenery and sound land you in an alternate reality that is as strange as it is believable.

The biggest difference between The Experiment and more conventional adventure games is the perspective. Instead of controlling an alter ego as in the usual point-and-click puzzler, here you pretty much play as yourself. You play the role of an anonymous person locked in the operations room of a ruined ship grounded on a tropical beach. Aside from the ability to control cameras mounted throughout the vessel's interior, you have no ability to communicate with anyone to determine who you are, how you wound up in this place, or how you can escape.

But you're not entirely alone. A scientist named Lea Nichols, who was working on some sort of ocean-going research project before it went horribly wrong and everyone was killed, wakes up in a cabin before one of your cameras at the start of the game. She has no idea who you are, though, so all you can do to find answers is to help her flee the corpse-strewn corridors of the vessel. You never take direct control of Lea, however, so you're stuck leading her from room to room by turning on and off lights and various other devices, along with unlocking doors. The idea is to get her in the right position to solve problems on her own, with you monitoring her progress on the many surveillance cameras scattered in every nook and cranny of the ship and chipping in to help by providing computer access codes, answering questions by nodding or shaking cameras, and occasionally operating robot vehicles of one sort or another.

Generally, Lea provides an objective and you then lead her toward it by using lights, computer screens, and the like as carrots. When she reaches a key quest location like a freezer, safe, desk, or lab table, Lea completes the task at hand or prompts you to help her by providing more information dredged up from the research center's computer system. Sometimes you also need to access all of the cameras in a certain area and pan them around looking for clues. As the game goes on, Lea adds more functions to the camera system, such as the ability to light up dark rooms or the ability to zoom in on documents, but you're always detached from your surroundings and doing nearly everything through Lea.

A great control scheme modeled on a stereotypical computer graphical user interface makes it easy to guide Lea. You spend most of your time keeping an eye on a map screen where you can click on the light and object icons that direct Lea forward. Camera icons on this map can be activated by simply clicking on them, which brings up as many as three windows that let you see what your companion is up to. There is a little fussing around with windows, but nothing here is out of the ordinary for anyone who has ever multitasked in Windows.

As you might expect, lacking direct control over a character makes for a few frustrating moments when you're starting out with The Experiment. But this distance also adds a peculiar sense of realism to the game, because it feels like you're actually sitting at your PC helping a companion solve a mystery. Instead of having to suspend your disbelief and buy into the concept that you're a scientist trying to get off a death boat, you can turn the lights down low and slip into a daydream that your PC is connected to a far-off ship's control system. This doesn't exactly create an atmosphere of high adventure, so it isn't ideal for gamers who want to believe that they're some kind of Indiana Jones-style superman every time they sit down at the keyboard. But this conceit works extremely well on an intellectual level, affording you the ability to sleuth it up in a realistic fashion without having to pretend that you're somebody else.

A few design problems interfere with this illusion. The biggest is an awkward translation from the original French. Some of Lea's instructions are odd and can lead you in the wrong direction, especially when you're trying to find the location of a particular code and aren't sure if you should be looking around with cameras or reading through computer documents. Controls are generally quite good, although the frustration factor can be high at times. Some puzzles have you manipulating finicky robot vehicles through tight quarters, and it's a bit jarring to have to take over manually when you've been directing the action from a distance all along. The pace is a little too slow. Lea strolls through the ship pretty leisurely, taking a few seconds to respond to every light cue. She also sometimes takes a little too long to say something after reaching a quest location. If you're not extra-patient in these situations and careful to pull up a camera angle showing exactly what she's doing, you might wrongly assume that there isn't anything of importance in the vicinity and lead her elsewhere.

The visuals and sound effects are a little rough and ready. The graphics are dated, with blocky character models and dark backdrops that are sometimes too gloomy to make out much detail. This can be frustrating when you get stuck, because the murky settings, the limited turning radius of each camera, and the general lack of control inherent in a game where you're directing somebody else's actions all combine to make it seem like you're playing the game with one eye covered and an arm in a sling. Regular hitches in the frame rate are also annoying. The sound effects are sparse and of about the same old-time quality as the scenery. The voice acting is subpar to the point of being irritating, since the actress voicing Lea speaks with all of the emotional gravitas of an operator transferring you to customer service. The music, however, works on a lot of levels. Most of the soundtrack kind of sneaks into your ears, creeping you out with something of an X-Files vibe before you fully realize the effect that the tunes are having.

While The Experiment isn't the sort of adventure that everyone will be able to appreciate, its hands-off design gives it an understated, intellectual realism. If nothing else, it offers a great change of pace from more conventional adventure games. 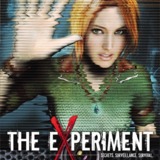