You keep me hanging on.

Memories are notoriously unreliable. We frequently forget things that have happened or embellish our experiences with new details that never actually occurred. The conceit of The Eternal Castle is that it's a remaster of a long-lost classic from the late 1980s. The developers claim, with a nod and a wink, that they wished to preserve the "feel" of the original and keep its memory alive. When I first heard about it there was a moment when I thought, "This looks vaguely familiar. I think maybe I played it on my old 286?"

I should have known better than to trust my memory. The Eternal Castle isn't a remaster at all. There was no game with that name released in 1987--nor, indeed, in any other year of the late '80s and early '90s. Instead, The Eternal Castle, as a brand new game in 2019, is a retro throwback that's at once deeply indebted to the likes of Flashback and Another World while at the same time recognizant of how much game design has evolved over the past 30 years. The result is a cinematic platformer that doesn't quite play as those games actually did but rather feels like our hazy, unreliable memory of them. Cinematic platformers have come a long way since the '80s, but the genre's core tenets of prioritizing animation over input (that is, when you commit to pressing the jump button you have to wait for the complete jump animation to play out before you input another action) and populating its levels with novel set-pieces can be seen running through games as otherwise diverse as the original Prince of Persia in 1989 right up to Limbo, Deadlight and Inside.

The Eternal Castle sees you play as the pilot of a crashlanded spacecraft, exploring a strange planet to recover the items required to fix your ship. The three levels that comprise the meat of the game--there's a fourth and final level unlocked later--transition through some remarkably varied scenarios. One moment you'll be sneaking past horrible creatures in a cemetery as flashes of lightning illuminate the night, the next you'll be climbing up and down the tattered framework of a bombed-out skyscraper. Each of the three levels has a broad theme linking one area to the next, but they don't rigidly adhere to any one setting. Indeed, one of the drawcards is the thrill of discovering what outlandish or perhaps utterly mundane (which I usually found even more memorable) situation you encounter next.

On a mechanical level, these stages are distinguished in terms of the type of experience they offer. One promises "low ammo" while another warns of "poor visibility," thus giving you some idea of what to expect and, crucially, what gear you might need to take with you. You can only carry two weapons at once, ammo is scarce, and clips can't be refilled. Deplete the six-bullet clip on your pistol and you'll have to swap it out for the next weapon you find, and if that's a shotgun with two shells then that's going to have to do the job. Every bullet counts.

This isn't a run-and-gun shooter, but in its weaker moments it can turn into a bit of a mash-heavy brawler. Some areas, and at least one boss fight, favor use of close-range melee weapons like the club, hand-axe or sword. Your moves are limited to a regular attack, block and charge and further constrained by a stamina meter, thus theoretically offering some sort of considered nuance to the combat. But in any instance where I was fighting more than one enemy I found it easiest to simply mash attack until everyone was dead.

However, there were the odd occasions where my progress was blocked by a particularly tricky section, always combat-related whether it was being outnumbered by a group of thugs in a nightclub or being mowed down by some persistent gunners as I attempted to charge across the no man's land of a battlefield. Here I took advantage of the game's structure and backed out of the level to return to the hub and try one of the other two levels. This is effective because throughout the three levels are permanent gear upgrades--a backpack, for example, that allows you to carry more ammo or a bandana that somehow increases your strength and ups melee damage--so you may well find the assistance you need is in another castle.

Indeed, the game's structure is a good example of how this is very much a modern cinematic platformer. Not only can you choose which level to play, thus reducing the likelihood of getting stuck, but your loadout carries over from level to level and any major items you collect stay with you regardless of how many times you die or restart. Of course, if you return to a previously visited level you do have to start from its beginning, but there are convenient checkpoints throughout and you'll rarely lose more than a couple of screens' progress when you die as long as you stay in the level. Similar games of the '80s and '90s could be extremely punitive, forcing you to replay entire levels over and over until you nailed the perfect run. All of that frustration is completely alleviated here, thankfully, and if you're after a stern challenge then the New Game+ mode will provide it in spades.

Part of the reason for my initial confusion over whether I had in fact played the "original" Eternal Castle is that this "remaster" apes the visual aesthetic of a late '80s PC game so well. Every scene is depicted in no more than four colors (black, white and just two others, typically a variation of blue and red) and each character or object within is composed of a collection of chunky pixels, mostly seen only in silhouette. It's not an exact match with the capabilities of CGA at the time--while plenty of games allowed you to boot up into one of the various four-colour modes I certainly don't recall any that switched palettes in-game and from scene-to-scene. And the quality of animation here is inarguably superior, in terms of the number of frames, than even something as revered as Prince of Persia. But the overall effect is uncanny. I felt like I had been transported back in time to a simpler, noticeably more cyan and magenta world.

The Eternal Castle is more than a mere nostalgia trip for aging gamers still hanging on to their 5.25-inch floppy drives. In many ways, it's just as modern as it is retro and more than capable of holding its own against its more illustrious contemporary peers. Luckily it's just my memory that isn't as good as it used to be. 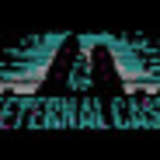 When he was a kid David Wildgoose mapped out every screen from the original Prince of Persia on graph paper in order to beat the game within its time limit. A couple of years later he wrote a trial review of the same game to land his first paid job as a game reviewer. It's fair to say the cinematic platformer has had a profound effect on his career. A copy of the game was provided by the publisher for the purposes of this review.