Capcom is big on cashing in on its extensive gaming history, so yet another blast-from-the-past package of 8-bit games from the company is no surprise. In this case, the theme is Disney--and a good reminder that, when Disney put its name on a game back in the day, it was a pretty sure bet you'd be in for a good time. Disney and Capcom had a great track record of solid NES titles based on beloved late-'80s/early-'90s cartoons, and now those 8-bit classics are available in one affordable package.

If you're the kind of person who even just sees the word DuckTales and instantly hears "woo-ooo!" in your mind, Capcom's gifting you a retro treat here. Six games are included in the Disney Afternoon Collection, and they are the kind of side-scrolling platformers so prevalent in the NES' heyday.

You'll find DuckTales and DuckTales 2, both Chip 'n Dale Rescue Rangers titles, Darkwing Duck, and the aerial shooter TaleSpin in the collection. These are largely straightforward ports of the original games made to fit your HDTV, but they're otherwise untouched replications of the original NES versions. You can turn filtering on and off on the fly to smooth out the pixelated graphics and stretch the game to fit your screen (or leave the bordered version true to the original aspect ratio), but none of the graphics have been explicitly retouched.

Given the nature of this collection, the entire pack feels like an historical artifact. In their day, Capcom's Disney-themed games had impressively high production values, solid level design, and otherwise stood out thanks to their recognizable cartoon cast. They also shared another defining feature--they were almost universally, uncompromisingly difficult (a trend that would continue well into the Super Nintendo years).

The Chip 'n Dale games were cooperative platformers, which was distinctive for the time. DuckTales offered players the ability to take the large worlds in whatever order they wanted and offered replay value with the ability to revisit previously explored worlds, since the levels were full of secret gems. Darkwing Duck focused on side-scrolling shooting and a humorously noirish atmosphere that was countered by a controller-throwing level of potential frustration due to game mechanics and difficulty level. The odd duck out (so to speak), TaleSpin, starts off almost like a side-scrolling arcade shooter, where you can only shoot one slow bullet at a time, which can be upgraded over time. The pacing is such that every shot must be timed perfectly, or you're doomed.

The games themselves are only part of the appeal here, though. Capcom has included a plethora of additional content as well. The Disney Museum lets you stroll down memory lane and provides some interesting perspective on each game and their characters. The goodies offered in the Museum include ads, concept art, and soundtracks. Given the historical nature of the games, this is a particularly nice touch that adds more weight to the idea that once, long ago, these were premium-priced, triple-A titles.

Each game also comes with two new modes: Boss Rush and Time Attack. Boss Rush distills the game down into a gauntlet run made up entirely of bosses, as the name suggests. Time Attack adds an interesting layer of social gaming to the mix--this mode lets you race through the levels against the clock but also links to online leaderboards to let you compete against the world for the fastest times.

The final addition to the Disney Afternoon Collection is the rewind button, which boosts the enjoyment of these challenging diversions. Pressing the left shoulder button instantly backs the action up so you can try again. It works throughout every game, and you can even use the feature to go back to the very beginning of a level. To say it's a sanity saver for those not used to punishment of this magnitude is an understatement.

The Disney Afternoon Collection is a refined time capsule that covers a very specific chapter in gaming history. While these games might not be anything to get overly excited about individually, in a package that includes plenty of history and extras, this collection is a nostalgic curiosity with heart. 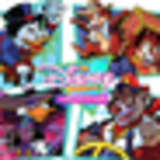 Jason D'Aprile spent around seven hours blissfully dying in a fit of nostalgic wonder while playing The Disney Afternoon Collection. GameSpot was provided with a complimentary copy of the game for the purpose of this review.