In almost every sense, The Dig represents a leap backwards from LucasArts' previous group of adventure games.

God help me for saying anything negative about Steven Spielberg, but this latest adventure from LucasArts that proudly bears his name is one of the most disappointing games I've ever played.

In almost every sense, The Dig represents a leap backwards from LucasArts' previous group of adventure games. Looking beyond the tired low-res character animations, the limited use of colors, and the conservatively drawn backgrounds, this adventure game follows the explorations of three overtly stereotypical characters through unimaginative, predictable plot twists, completely devoid of the humor that you'd expect from a LucasArts game and the humanity that you'd expect from a Spielberg production.

There's no "magic" here. As you simply guide a stock hero around an uninhabited planet, the only sparks of excitement are quickly counter-balanced by inordinately difficult puzzles. Not only are these brain-twisters tough, but they're temperamental—some follow logic, others just call for trial and error, and yet others will leave you clueless, even if you've attempted to cheat your way through.

Mr. Card's dialogue is no less deplorable than the game's slow-paced plot. The voice-acting is believable, but again, stereotypical. All this aside, though, what securely affixes this title to the bottom of the LucasArts list is how seriously it takes itself. In games like Full Throttle and Day of The Tentacle, where comedy is king, inconsistencies and stereotypes can be overlooked as part of the silliness. But the epic space adventure drama of The Dig doesn't have this freedom, and it doesn't pass the litmus tests of believability or entertainment.

The Dig's saving grace is its grand music score in a Wagnerian vein. If only the rest of the game echoed the quality that its sound scheme does, then it might be worth playing.

Better to leave this one buried. 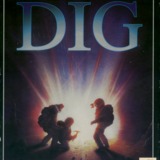