The Dark Pictures: Man of Medan Review - Drown And Out

Man of Medan is set almost entirely at sea on an enormous, abandoned boat. Loosely based on the real-life mystery of the OSS Ourang Medan, which became a shipwreck in the late 1940s after its entire crew were lost under mysterious circumstances, Man of Medan is also the first part of Supermassive Games' proposed Dark Pictures Anthology--a series of short, branching horror narrative experiences in the vein of its tremendous 2015 surprise hit, Until Dawn. If you've played Until Dawn, you'll know what to expect. But despite a smart online co-op mode, Man of Medan's weak narrative ultimately makes it a disappointing first installment.

The game's plot jumps between five different playable characters who are all experiencing the same event. You'll determine their ultimate fates by making decisions for them, as well as responding to quick-time events. There are reportedly 69 different potential deaths you can experience (including those of non-playable characters), but it's also entirely possible that your whole crew will survive. Alternatively, they might all die. Man of Medan's main selling point is that your decisions will affect how things play out, how the relationships between your characters will develop, and what you'll uncover and experience along the way.

In conversations, and at pivotal points in the plot, you'll often be given three options, one of which is always to say or do nothing. So focused is Man of Medan on its story, there are no puzzles to solve or combat systems to master outside of these choices, just lots of exploring and quick-time events. However, the game is plagued by a big central problem: a fundamentally weak plot.

The story isn't engaging, as the player is given little reason to care about the characters and the horror tropes being explored mostly feel hackneyed and uncreative. After a brief prologue scene set in the '40s, you spend Man of Medan's four-hour (give or take) runtime in the present day. The story opens with the crew planning a dive to a previously untouched sunken fighter plane from World War II, which ultimately leads to a series of events that sees them trapped on the Medan, a seemingly haunted abandoned ship, held captive by a pirate gang who are convinced that the ship--which is riddled with dead bodies--contains treasure. Naturally, things start going bump in the night, and the gang finds themselves dealing with various ghouls and terrors too.

There are plot holes and character inconsistencies throughout, some minor, some more blatant. It’s perhaps easy to forgive the questionable presence of rats all over the boat, still gnawing on hunks of meat that have been on the ship since the 40s, but it’s less easy to excuse how blasé the characters act about the horrifying situations they find themselves in. They're mostly unlikeable, too--There's the cool but insecure Alex, his dorky younger brother Brad, Alex's outgoing, wealthy partner Julia, Julia's obnoxious but well-meaning brother Conrad, and Fliss, the captain of the small boat the four have chartered at the story's opening. The dialogue is generally not very good; at times it successfully recreates the feeling of watching a fun-but-silly teen slasher, occasionally hitting that good-bad sweet-spot as a character awkwardly refers to something as ‘lit’ or flirts awkwardly, but it can also be annoying when the five central characters' interactions sound stilted and unrealistic. Without spoiling anything, the story also explains a little too much about what's happening on the Medan in a way that makes repeated playthroughs much less satisfying.

There's also an over-reliance on jump scares, which cheapens the horror experience. One standout sequence midway through the game that does a great job of getting under your skin, as Brad finds himself stuck in a looping hallway that grows just a bit weirder every time he travels down it, but otherwise Man of Medan is reliant on spring-loaded cats and lots of suddenly-morphing faces. On the plus side, it looks tremendous--the character models can be a bit waxy, but the ship is extremely detailed and creepy, and the game effectively communicates how unpleasant the act of exploring a creaky rustbucket full of dark corners and rotting corpses must be. The trade-off, at least on a base PS4, is that animations frequently stutter, breaking the mood as frames slip away.

There are pacing issues, too, especially with the extremely slow opening section that weighs down repeat playthroughs. While you can see different scenes or experience unique outcomes with each playthrough, some scenes will be essentially unchanged each time, which can quickly grate. You'll also occasionally have to check in on 'The Curator', an omnipresent suited man who is clearly meant to be the mascot for and host of the Dark Pictures Anthology. He's a pompous version of the Crypt Keeper (from Tales From The Crypt), but without any of the "good evening, boys and ghouls" merriment you want from a horror anthology host, and as a result, he doesn't quite fit.

Multiplayer is Man of Medan's big addition to the formula laid out by Until Dawn. There are two forms of co-op: Shared Story, in which two players tackle the game together online, and Movie Night, where up to five players can play together offline, playing through the chapters of whichever characters they are assigned at the start. Playing together on the couch is perhaps meant to evoke that "don't go in there" feeling of watching a fun horror movie with friends, but Man of Medan's relatively straightforward level designs, which never make it seem dangerous to wander off-path and explore the open doors and alternate pathways you encounter, don't particularly facilitate this. Death is more often down to a failed QTE rather than a dialogue choice you made or because you decided to investigate something spooky. In fact, right near the end, a mistimed button press can be the difference between everyone surviving and everyone dying--being responsible for that in front of your friends is more embarrassing than it is funny.

However, so many of the game's issues feel like much less of a problem when you jump into the smart and innovative online mode. It is, without a doubt, the definitive way to experience Man of Medan, especially if you're playing with another person who is familiar with the material. Shared Story sees you both playing at the same time, taking control of different characters as their scenes play out simultaneously. You'll both, eventually, get a turn with every character (if they live long enough), and often your paths will diverge. Once the five main characters meet after the initial prologue, Shared Story immediately offers a more engaging experience than the single-player campaign can.

Early on, for instance, I played through a sequence where two characters dived down to inspect something underwater, while my co-op buddy stayed on the boat and experienced a different part of the story. In single-player, you'll still see both scenes, but one will be greatly truncated. In online co-op, some scenes are expanded, or you might occasionally see parts of the story, or make choices, that cannot be accessed in single-player.

This led to the two of us conspiring to make certain things happen, to bend the game's story to our will. We were more successful with some outcomes than others (a failed quick-time event led to an unexpected death early on), but working together to achieve dramatic satisfaction, and choosing when to reveal what just happened and when to let the other player try to figure out what we'd done in our scenes, was a delight. Each player won't see every scene when playing this way, and it's entirely possible to play without ever communicating, which makes the plot more unpredictable.

No matter how much or little you choose to share, though, Shared Story is absolutely the right way to play the game. It's very well designed; my co-op partner and I never found ourselves waiting for the other player to hurry up and trigger the next cutscene, and being able to see how your friend is trying to direct a scene, and deciding whether to help or hinder them in that, is excellent. It feels like you're working together to wring as many interesting outcomes as you can out of the game, and effectively doubling the number of potential choices leads to a much stronger sense of variety.

Man of Medan is still telling a weak story, though, as much as Shared Story plasters over this with its excellent take on co-op, which lets you plan things out and work together to craft the narrative you want to tell (and kill the characters you find the most annoying). If you can organize a session with someone else who owns the game and play through the whole thing together, it's an excellent experience; but if you're after another single-player horror narrative experience like the one offered in Until Dawn, it's very disappointing. As a show of the potential for the Dark Pictures Anthology, Man of Medan is largely a success, but as a first episode, it leaves plenty to be desired.

View Comments (50)
Back To Top
6
Fair
About GameSpot Reviews 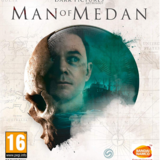 James O'Connor has an urge to go back and replay the excellent Until Dawn now. He played through Man of Medan in single player and both multiplayer modes, going back through scene selection afterward to test out a few alternate possibilities. Review code was provided by the publisher.