Outstanding controls aren't enough to save this generic and often frustrating shooter.

As one of the few exclusive first-person shooters for the Wii, The Conduit has garnered a lot of attention. From a technical perspective, The Conduit is an undeniable success. The controls in particular are outstanding, finely tuned to make gunning down enemies while sprinting around the battlefield fun and satisfying. Visually, the game is also top-notch, filling the screen with enemies, explosions, and fancy lighting effects, without the slightest drop in frame rate. However, as entertaining as The Conduit can be, the bland level design and relentless monotony of the single-player campaign create an air of sleepy boredom, and the multiplayer is too unremarkable to entertain for long. The Conduit has an impressive backbone, but it's too generic to capitalize on any of those technical feats.

You play as Michael Ford, a Secret Service agent with a penchant for gunning down hostile alien forces. Your role changes throughout the game as your supposed allies reveal their true identities, but the cliche story and personality-free characters offer you no real reason to care about these supernatural events. The lack of compelling exposition makes it difficult to get sucked into this world. The plot is conveyed by static dialog boxes before levels, giving the game a stale energy that it is never quite able to shake. However, despite the bland tale this game inexpertly weaves, there is one nice touch that adds a bit of flair to the drudgery. There are radios scattered throughout the campaign with broadcasts filling you in on the backstory of this ravaged land, and catching a bit of news as you mow down enemy forces gives you some much-needed context.

The real draw in The Conduit is the outstanding control scheme. Conceptually, it's nothing special. You aim your gun with the remote, walk around with the analog stick, and perform various moves by hitting buttons or performing specific motions. However, the execution is nearly flawless. You can aim with pinpoint precision, easily lining up headshots from across the screen or spinning around to cut down a critter creeping up behind you. With more than 10 different actions to keep track of, it can be difficult to find the ideal controller setup, but you can customize the controls to suit your play style. For instance, the default setting forces you to thrust the remote forward to perform a melee attack, but that drastically reorients your viewpoint, which makes it difficult to aim your next shot. You can easily map that action to the D pad, though, and use the remote swing for a less important move. Furthermore, the aiming sensitivity and strafing can be tweaked until it's ideal, which makes the shooting in The Conduit satisfying.

If only the rest of the game could have lived up to the impressive controls. The levels are poorly designed, alternating between generic shooter cliches and frustrating enemy encounters, with nary a sweet set piece battle or over-the-top boss fight in sight. Although you travel through a few different environments--including underground government bases, war-torn streets, and stinky sewers--the only difference among these areas are slight visual changes. They all play in exactly the same way, making for a repetitive and ultimately forgettable experience. Every level is comprised of narrow corridors herding you from one alien battle to the next, with dull key hunts serving as the only taste of variety.

The lack of interesting objectives creates a monotonous feeling, but questionable design decisions make the campaign even more grueling. Your buglike enemies quickly incubate and hatch from fertile eggs, and you must continually hunt down these replenishing wombs to stem the flow of angry aggressors. Although being forced to constantly track down well-hidden nests gives the game a tireless pace, it leads to a number of cheap deaths because you constantly find enemies sneaking up behind you, shooting you from above, or attacking you through paper-thin walls. Furthermore, these nests are often hidden in devious locations, forcing you to risk death to incinerate them. At certain points in the game, you will also encounter nearly invisible bombs that must be disarmed before they blow you to pieces. On their own, they're slightly annoying but hardly life threatening. But when you're forced to travel down a long corridor populated by these translucent explosives while trying to avoid snipers perched above and foot soldiers swarming on the ground, they just pour gas on the flames of frustration.

The Conduit's difficulty is all over the place. Thanks to the superb controls and powerful guns, you'll spend parts of the game vanquishing enemies with style. Entering a room filled with armed troopers and taking them out with grenades and potshots as you move in to and out of cover can be thrilling. But all too often, the game erects a roadblock that will artificially halt your progress. During a few occasions, you'll be swarmed by attackers as soon as you enter the room, but you'll have no cover to hide behind. Other times, enemies will target a door that's still closed, resulting in instant death as soon as you open it. These situations are almost impossible to pass your first time through because you will need to memorize where the threats are positioned before you have a chance of survival.

The multiplayer is as technically impressive as the single-player experience, but it lacks the excitement that could have made it something special. Twelve players can compete at one time, and though the game occasionally lags, it generally remains stable throughout matches. Although you can speak to your competitors using WiiSpeak, it only lets you converse with friends, which severely limits its usefulness. The seven maps are based on the single-player levels and suffer from many of the same problems as the campaign. They're all a series of corridors without much diversity, so deathmatch duels boil down to shooting your closest foe without any need to seek out an optimal position or plan a more advanced strategy. Although it can be fun to shoot your enemies, the tactically uninteresting landscapes create a feeling of repetition that hinders the long-term enjoyment of the modes. The capture the flag variants aren't much better because the linear levels don't allow for enough creativity to outsmart your opponents. The ability to rank up by earning experience points in battle is a nice touch, but the multiplayer ultimately lacks depth.

Technically, The Conduit is one of the finest looking games available for the Wii. Highly detailed enemies swarm the screen, tossing grenades and peppering you with fancy weaponry, and the game is able to run smoothly despite the chaos. Guns create a brief burst of light on walls as the bullets streak by and explosions illuminate the screen, leaving death in their wake. As fine as The Conduit performs technically, the lousy art makes it an eyesore at times. The levels blend together because they all have the same drab color scheme and no memorable landmarks. The enemies could have been ripped from any number of science fiction stories and are based on an unimaginative insect design that would be impossible to pick out of a lineup. It's a shame the art direction couldn't have matched the impressive technology because what could have been a visual showcase for the system is now just a model for wasted potential.

Wasted potential is the main theme for The Conduit because its technical prowess is overshadowed by misguided design decisions pasted onto a generic science fiction universe. The excellent control scheme is able to save this otherwise average adventure for a little while, but the many missteps of the campaign become suffocating before too long. The multiplayer, too, is entertaining for a few hours, but the seven maps are too simple and predictable to provide a consistently thrilling experience. The Conduit may provide a glimpse at the future of Wii shooters, but it's still largely mired in the well-worn past. 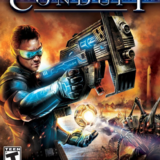 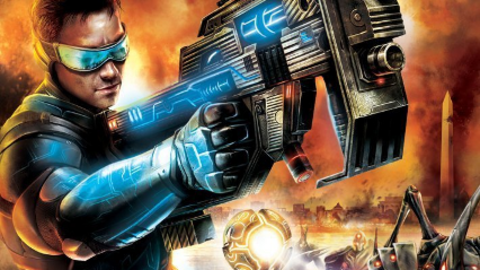 The Conduit is a sci-fi first-person shooter exclusive to the Nintendo Wii and features online multiplayer.