The Club provides some old-school single-player thrills, but it fails to live up to its initial promise.

The Club is an old-school shooter. It emphasises single-player action over multiplayer competition and encourages near-endless replaying to beat that elusive high score, but while it's good enough to keep you coming back, it is far from perfect. The game's premise is a simple one. The eponymous Club is a powerful collection of super-rich, morally bankrupt individuals who have decided to run their own personal worldwide blood sport à la Running Man. Eight contestants are (mostly) forced to compete against one another in various locations. You play as any one of them and must try to win the most events in each locale. There are six characters available at the start, plus a seventh unlocked after four tournaments and another after you beat them all. While these characters have distinct looks, they play only slightly differently; some can take more punishment and others move slightly faster

The way to win each event is simple: He who finishes with the most points wins. Points are awarded for kills, with distribution based on the accuracy of your shooting, the toughness of the enemy in question, and the weapons being used by both you and your mark. To spice things up a bit, every kill causes your score multiplier to tick up by one, but if you wait too long between kills, this multiplier starts to fade away. You also get bonus points for style: shooting someone as you roll to dodge fire or as you burst through doors, or shooting from long range. You can also boost your multiplier--and refresh the timer--by shooting wall-mounted skulls, which are placed in various locations around the level. The higher your multiplier the faster it ticks down, so even with a constant stream of willing casualties it's hard to get the multiplier much over 30.

This scoring system leads to tactical nuances that add an interesting layer of challenge to the game. For example, when you're confronted by a group of enemies, you can take out insignificant minions with pistols first, leaving those who can actually do damage for last. This means you rack up the multipliers on lower-scoring enemies, and so get more points in total by multiplying the bigger scores more. This can make life trickier in the long run but is one of several counterintuitive things you can do to rack up more points.

There are five event types, and each location features up to seven different events. Three event types involve more-traditional running, while two are static. The simplest of these is sprint, in which you need to get from one end of a set course to another while scoring as many points as possible. Run the gauntlet is essentially the same, but with a time limit--generally around the two-minute mark--while time attack has you running two or three laps of a course, killing enemies and collecting items to add time to your clock. The static modes--survivor and siege--force you to stay in a set area as enemies pour in from all angles, and the goal is simply to survive until the timer runs out. The only difference between survivor and siege is that in siege you find yourself in an exposed position where enemies try to pick you off from range, while in survivor you will end up fighting in much closer quarters.

The levels, with names such as Gondola in 60 Seconds, Diagnosis Girder, and The Crate Escape, are varied, despite the fact that courses in each zone often share elements. The survivor and siege levels, for example, almost always take place in areas you simply ran through before, but they have additional barricades and helpful items. The three other event types also often share elements, which gives you the sense that the levels are part of a tournament in a larger space, instead of being unrelated individual courses. The tournament locations are fairly varied visually and include such environments as a ruined steel mill, a decaying cruise liner, and an abandoned English manor that doubles as a home for the criminally insane. Despite the significant superficial differences, the environments are just combinations of rooms and corridors with few open spaces, and they demand no real variations in play style.

Some of the locations are impressive, however. One is set on a rusting cruise liner docked off the African coast and provides several noteworthy moments. The Venice siege level features the most impressive piece of destructible environment in the game--assuming you have the accuracy to shoot a rocket out of the air--and the Manor House survivor level is likely to give even the most hardened shooter fan something of an adrenaline kick

The weapons suffer from similar issues as the levels; while there are a few standout weapons, a lack of nonsuperficial variation hurts the game. There are 15 weapons available, including two pistols (one of which is the aptly named Magnum-like Callahan), shotguns, machine guns, a sniper rifle, a rocket launcher, and a minigun. Regardless of what is to hand, you are likely to find yourself using the machine guns wherever you can and feeling frustrated when none are available; their power and rate of fire make them unbeatable when it comes to racking up headshots.

Combat in The Club feels a little dated, despite the score-based innovations. The lack of a cover mechanic stands out, given the game's fast run-and-gun style, especially in the siege and survivor events, where cover is temptingly provided but impossible to properly use.

Melee combat is an option if you're backed into a tight corner, but it simply involves lashing out at random with the butt of your weapon. This is particularly odd considering the game's emphasis on killing with style and the fact that a number of the characters have useful melee weapons slung about their person--one has an ice axe, another a machete, and a third a truncheon.

The game offers four different single-player difficulty levels that ramp up nicely, forcing you to rethink your strategy with each successive level. While this will keep you coming back to The Club, the multiplayer won't. The levels feel too large, the weapons feel unbalanced, and the frustration of being able to shoot someone repeatedly in the face and see that person walk away as you collapse is unspeakable. The return of four-player split-screen offline play is welcome, but again, the game itself means even this touch fails to fulfill its potential.

Technically the game's graphics hold up well; the frame rate is consistent throughout, and the game looks good--it's nothing spectacular, but it sits well enough among its contemporaries. The audio quality is inconsistent, however. Your enemies will shout at you and at each other, and these shouts vary with locale--the various English accents from the Manor House zone are a highlight--but the weapon fire sounds universally poor and lifeless.

As a whole, The Club's single-player content just about works as an old-fashioned shooter that isn't shy about its old-school roots, but it suffers from a lack of variation in its level, weapon, and character design. It's still good enough to keep you coming back to try to beat that last high score in a manner that may not be familiar to anyone under the age of about 25, and for that the game deserves praise despite its multiplayer shortcomings. 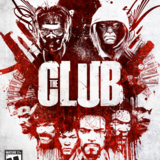