The Cat Lady is Susan's story--a story of painful tragedy and cautious redemption, disguised as a horror adventure game. And it is at Susan's end that the story begins.

The surreal field you traverse in the opening minutes is at turns beautiful and horrific, just as you might term The Cat Lady's overall visual language. Susan looks as though she's been cut from a magazine and superimposed onto old Polaroid photos. She and other characters move gracelessly, and simple facial animations simulate only the vaguest of lip motions. It's a weird and striking look, and one that allows certain sequences to land with a weighty thud, leaving you feeling anxious, shocked, or melancholy. The surreality of The Cat Lady's characters is most evident in two women that provide Susan plenty of grief--one of which you meet after Susan has already decided that death is preferable to the grief of living.

If you're Susan Ashworth, life isn't fair--even after you've exorcised the most harmful demons from your soul.

But even in death, Susan cannot find comfort. The old woman Susan encounters in this odd afterlife wants to strike a bargain, and Susan finds herself powerless to resist. There are monsters lurking in the world of the living, and if she hopes to find peace, Susan must vanquish them on behalf of this hag, this obstacle between her and her final rest. Just a few drops of blood should seal the deal.

The drops of blood you shed, however, are more than a few. And in return for her services, Susan receives the "gift" of temporary immortality--a gift that, for the suicidal, is a horrific curse. That first gruesome glimpse of bloodshed is an emotional bludgeon, and The Cat Lady smartly balances moments of quiet sadness with similar scenes of rage and misery throughout the game. It's important to note, however, that as shocking as some of these scenes are, they are not gratuitous, though at first they may seem so. Rather, The Cat Lady draws important parallels between Susan's suffering and the monsters she's been sent to annihilate. These monsters are incredibly, terrifyingly real, but they represent the depressed individual's enemies. And as anyone with depression might tell you, internal demons cannot be painlessly subdued.

The Cat Lady draws important parallels between Susan's suffering and the monsters she's been sent to annihilate.

The first of seven chapters effectively simulates Susan's confusion as she awakes in the hospital to find a sweet nurse at her side. But Susan is not inclined to share much about herself, and so early events, such as her reaction to a bouquet of flowers, are subtle mysteries that later become enlightened. Progressing is a matter of wandering from left to right with the arrow keys, accumulating objects, speaking with others, and solving puzzles by using those objects in particular ways. I was never stumped, but nor was The Cat Lady a complete cakewalk, though it isn't the challenge that the puzzles present so much as the atmosphere they create that makes them so interesting. To solve one early puzzle, for example, you must allow a psychiatric nurse to inject you with God knows what. You then find yourself in a foggy mental purgatory you must explore to move the story forward.

I know this haze. I've survived a suicide attempt, and I spent years in and out of hospitals as I traveled the road to recovery. The Cat Lady deftly depicts events and emotions I've experienced--the defiance toward doctors, the feelings of worthlessness, the mistrust of anyone attempting to get too close. More importantly, however, it also depicts the long road to recovery, and does so without sugarcoating the painful realities of life. For Susan, true hope first arrives in the form of a young woman named Mitzi. Mitzi's life is no less troubled than Susan's, but her manner of dealing with her hardships is far different, though not necessarily any less violent.

The two bond over one of The Cat Lady's more interesting mysteries, and the one that leads to the game's final catharsis. The puzzles throughout the later chapters become both more macabre and more playful. My favorite among them involves frightening Susan's upstairs neighbor, a sequence that's told in flash-forward as you describe to Mitzi the urban legend that inspired your prank. You can mold the outcome of certain story events in this chapter and others, though sometimes, the dialogue choices are more about building up your own image of Susan than they are actually steering the plot.

The puzzles throughout the later chapters become both more macabre and more playful.

Perhaps you come to The Cat Lady for the creep factor rather than for the remarkably human, empathetic story. There are a good number of eccentric and disruptive scenes, including one featuring a malformed, convulsive figure that shouts "misery!" when you approach. These scenes are carefully constructed for maximum effect so that even if you see the consequence coming (as I did in a puzzle involving some intricate machinery), you're still startled (as I was when I finished the puzzle). The horror is all the more effective for the quiet scenes that precede them, such as a flashback sequence that uses superimposed text to terrific, dramatic effect--and reveals the events that led to Susan's bottomward spiral.

Both Susan and Mitzi are ably voiced, as is much of the supporting cast. As Susan grows more confident, so too does the actress's performance crescendo from passionless victim to assertive companion. There are a few weak performances, a fast-talking Scottish mother among them, but it's the audio's recording quality that most detracts from the story. The voice-over often changes volume or tone abruptly, as if that particular line were recorded on a different day, in a different room, with a different microphone. Certain events, such as a ghastly one involving a bottle of bleach, are noticeably quiet, as if the intended voice-over and sound effects were never inserted. These aren't major issues, but given how important the sound and performances are in encouraging you to invest in Susan's struggles, they still stand out.

For Susan Ashworth, suicide is meant to be a way out, but it instead becomes a way forward. If you seek horror, The Cat Lady may sometimes freak you out, though probably not outright scare you. But that horror is in service of a touching character portrait--a portrait that's authentically, poignantly askew. 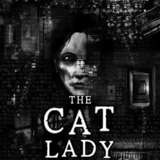 Kevin VanOrd owns only one cat, but he was still invested in The Cat Lady's titular character. He finished the game in about six hours.