One man's home is another man's hell

I've read developer Jason Rohrer's account of the events that inspired his game, The Castle Doctrine, many times, in many places, leading up to its release. His family lived in a bad neighborhood. A dog attacked his wife during a family bike ride. He bought a club to beat away any other dogs that might threaten them in the future (a club that he'd later offer as a reward for an in-game contest). It's begun to sound like a mantra, imbued with greater significance through the act of repetition. Rohrer sought to probe the conflicted feelings that haunted him about the event--about his role as de facto protector of his family and his home. The Castle Doctrine is the game born of that narrative, and named after the principle of law that a resident is free to use deadly force on intruders.

That's a touchy proposition. Emotions swirl around the doctrine. It's bound to systems of economic and racial disparity, to prejudices and fears that are inherently irrational. Yet The Castle Doctrine nimbly leaps that moat, and assumes a scenario in which a break-in is inevitable. You're given $2000, a vault to hide it in, and a pixelated nuclear family that looks on, expectantly, for you to construct a fortress. And you'd better do so, because a server's worth of other players will get a chance to invade the minute you step out the front door. They'll be coming for the cash you've left in your vault, and the only things standing in their way will be the walls, traps, and pit bulls that you've placed in between.

You may also mask your face and play the more directly villainous role yourself. Upon leaving your own home you're presented with a list of everyone else's abode, top-down from rich to poor. After you've tediously scrolled your way through to a house that looks viable, you're just a click away from their doorsteps. When attacking, you face a darker, more imposing version of the same sort of plot you've been given, usually made unrecognizable by its owner's unique renovations. Stepping into a home is a matter of pressing the corresponding arrow key to move to an adjacent space on the grid. Surviving the owner's labyrinth is another matter entirely.

Walls tend to get short shrift in video games, which see them only as physical barriers to be scaled or bypassed with X-ray vision. But walls can also partition information. The Castle Doctrine uses them thusly, and to great effect. They reduce the field of view, shrouding invaders in dark, cramped hallways, and hiding the contents of rooms. Walls funnel prospective robbers like a cattle run, away from critical sections of your dwelling and into the deathtraps you've laid elsewhere. Should an invader get cooked on your electrified floors, or mauled by one of your pit bulls, you claim a bounty and any items they had on their person. The incentive then, is not to repel invaders, but to draw them deeper--to play off their confidence or curiosity and lure them into putting their own heads in the noose.

Information is the grand advantage that the defender has over the attacker in The Castle Doctrine, and savvy players put that advantage to diabolical use. While the game requires you to prove that you can bypass your own defenses without tools prior to opening your home to invasion, foreknowledge of your own traps makes this a formality. A winning strategy quickly reveals itself: force would-be burglars into a guessing game with impossible odds. Tuck your vault in the back of one of a few dozen identical hallways, and a guaranteed death behind the rest. Every home worth the effort of a break-in has some version of this gambit within its walls, with an intimidating tally of deceased attackers steadily growing alongside the value of its vault.

There are other strategies, too, puzzles and psychological ploys that players have lent expressive names like "Schrodinger's Corpse." There are the commit gates that prevent retreat by activating when certain thresholds are crossed. The pit bulls that catch sight of invaders through windows, then move to attack through unknown channels behind the walls like Dead Space necromorphs. The massive spans of electrified floor that only receive a current the moment a burglar is too far from the end to make a break for it, and too far from the start to go back the way they came. The most devious of the bunch place cats—which move away from the player upon sight—in a position where they retreat towards an off-screen assemblage of switches that control traps attackers must step over. Only the owner knows the specific pace required for safe passage.

The incentive then, is not to repel invaders, but to draw them deeper--to play off their confidence or curiosity and lure them into putting their own heads in the noose.

Every trap has a corresponding tool that can be used to bypass it, in theory. Wood walls can be sawed, pit bulls can be fed a drug-filled steak, and so on. These weapons are intended to be the means by which robbers can circumvent inauspicious pathways, or rectify a wrong step. But it's no difficult task to introduce enough redundancy to your home to tool-proof it, when a section of steel wall costs $40 and the one-time-use cutting torch needed to bypass it costs $800. Entering another's home is a bad bet in The Castle Doctrine, a lottery ticket's chance at success measured against near-infinite permutations of grisly death.

Perhaps parity isn't the goal for The Castle Doctrine. Indeed, there's something of the desperation that might drive someone to attempt a real robbery in the game's model. Nobody tries to shoot the moon here unless they've been dealt a bad hand, one way or another. Perhaps you fell to another player's traps. Or you returned home to find your metaphorical castle sacked, the vault empty and your family dead, and committed suicide. There's no end-game here; one fate or the other catches up to everyone eventually. Death means a hard reset: a new vault, a new $2000, and a new pixelated family with new randomly generated names.

The tragic story of your faux-family dulls each time they're bludgeoned to death. You start viewing them as board game pieces, to be distributed in the defense of your vault. You use their panic buttons to trigger traps. You give your wife a gun. You turn the children into sentinels. You stop checking their randomly generated names. They're doomed anyway--by the end you're about as broken up over their loss as you are when the opposing team captures your flag in Call of Duty. The zero-sum structure of The Castle Doctrine encourages this sort of casual indifference. Cynically, the game parcels out half of your cash to the wife character with the expectation that a mechanical concern for her safety will bleed into an empathic one. But the decision provides a motivation for attackers to kill wives, too.

What is The Castle Doctrine, without empathy, without emotion? Just a game, in the most pejorative sense of the word. From their removed, isometric vantage point, the player gets no sense of the concerns or fears that could rouse a new father from sleep, baseball bat at the ready. Nor do they get a fair look at the political and ethical undercurrents that run just underneath just such a hypothetical. Any semblance of reality evaporates the first time they attempt to return to their house only to be turned away with the message "Your house is currently being robbed. You can't work on it right now."

Rohrer may have set out to make a game that puts players in his shoes, that plays at conflicted machismo and the fuzzy logic of home invasion paranoia. I would have been interested to play that game. But the flawed, nihilistic, trap-building simulator that resulted isn't worth a look. In the whole of the game, only one metaphor hit home for me. Sometimes when you manage to reach another person's vault, you find it empty, pillaged by a previous robber. There's nothing to take away, and all the time and effort you've put into the endeavor has been wasted. 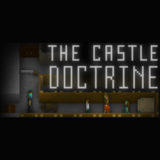 Even after many hours of play, Nick Capozzoli clearly doesn't have the sort of nefarious criminal mind required to succeed at The Castle Doctrine's game of trap-building and armed robbery. For the purposes of this review he was killed hundreds of times by pit bulls. 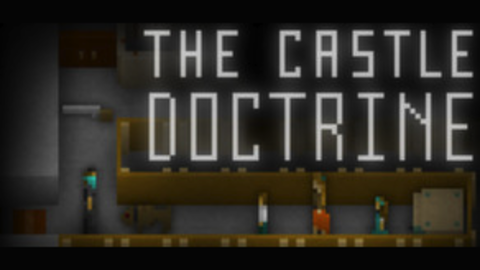 The Castle Doctrine is a massively multiplayer game of burglary and home defense.