The Bridge is a visually appealing puzzler that entertains despite sluggish movements and a few frustrating levels.

Few games capture the academic thought process as well as The Bridge. Our hero--bearded, bespectacled, and dressed in a tweed coat--may fit the classic stereotype of a university professor, but everyone from students to deans will recognize his struggles. We find him alone in a black and white world that reflects the graceful simplicity of pure logic, and we watch him discard unsatisfactory ideas and leave eraser smudges as a reminder of his mistakes. It's a lonely world, fraught with many moments of frustration and suffering from occasional tedium, but every now and then it rewards you with flashes of insight that make the whole endeavor worthwhile.

Every puzzle in The Bridge gives you the simple goal of walking through a door. A constant juggle of physics, gravity, and perspective complicates this structure, however, and the game wastes little time in delivering delightful challenges. In the easiest puzzles, you rotate the entire level clockwise or counterclockwise, attempting to maneuver spherical menaces reminiscent of Madballs toys from the 1980s so you can avoid them and their deadly touch. Later, you toggle vortices to grab objects temporarily and disable them once you've rotated the level into the proper position for keys to fall within reach. Later still, you flip entire levels and transform yourself from gray to white, which determines what objects you can and cannot interact with. That's a lot to wrap your brain around, and by the end, you have to employ every skill you have learned to amble through the level's exit.

This progression happens quickly, or rather, it does if you're mentally agile enough to get past the puzzles in a timely manner. Indeed, The Bridge is a short game if you judge it by its 24 short levels. The game's longevity rests on the stages that flip those levels in a mirrored mode and tosses more menaces between you and the ever-elusive door. The concept sounds cheap, but it makes a massive difference in reaching the solution for each puzzle. For one, the new perspective makes the puzzles harder, and The Bridge's absence of a hint system allows for small moments of triumph when you finally realize the usually simple solution to what looks like a complicated mess. Indeed, seasoned puzzlers who may have been put off by the simpler solutions of the first playthrough will find much to love in these later stages.

Unfortunately, some of the puzzles' designs elicit emotions other than love. For one, both your bearded protagonist and the level rotation mechanic shuffle along at a maddeningly lazy pace, and those airy moments grow frustrating in levels that encourage trial and error more than brainpower. A Braid-like option to rewind time in case of error or death lessens the pain, but rewinds move slowly enough to have you resetting puzzles in the most frustrating cases. This pace even makes some of the earliest puzzles harder than they need to be, since you sometimes over-rotate a level in your haste to swing menaces on chains into the perfect slot or to drop your character down at the precise moment demanded by the situation. On almost every level, The Bridge seems to insist on reminding us that patience is a virtue.

How wonderful that the surrounding world is so alluring. The Bridge's aesthetic draws heavily on the perspective-bending work of M.C. Escher, and much like his art, each level unfolds in grayscale hues that evoke penciled illustrations. This conceit carries over into the protagonist's deaths, which leave permanent eraser-smudged imprints to remind you of your mistakes, and the way that he's penciled into each level he enters. Escher's famed staircases to nowhere make appearances in several levels, and figuring out how to access each with The Bridge's perspective shifts is one of the game's key pleasures.

What's most refreshing, however, is the game's dedication to minimalism. For most of The Bridge, it's just you and the game, and no health bars or item counters mar that serenity. If there's a problem, it's that this approach proves to be an obstacle once new concepts like the perspective switches appear without explanation, although playing with an Xbox 360 gamepad lets you take advantage of the rumbler when you pass significant objects.

There's an intriguing story here, too, but piecing it together requires some of the same brainwork you apply to the puzzles. The narrative is not obvious, but it makes itself known in the details, such as how The Bridge's very first frame rewards you for thinking differently than you may have expected. Follow the breadcrumbs closely enough, and you piece together a narrative that touches on the pain of creation, a descent into madness, and the fascinating (and fictional) relationship between Isaac Newton and Escher. It's possible to play through The Bridge with only the most cursory knowledge that a greater plot ties it all together, but the act of unraveling that plot, revealed in dates above doors and the designs of each level, constitutes The Bridge's largest puzzle of all.

Although rage-inducing difficulty spikes exist, The Bridge generally offers a middle path that should appeal both to newcomers and to expert puzzle solvers. The game's chief appeal may lie in both its unique visuals and its calming soundtrack, but the puzzles themselves are memorable set pieces worth revisiting after the first completion. The core gameplay may be short, but The Bridge makes good use of that time by presenting a commendable variety of puzzles, and it's an easy recommendation for players seeking to span the bridge between fun and thought.

View Comments (10)
Back To Top
7.5
Good
About GameSpot Reviews 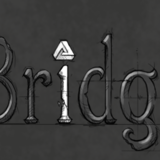