The Binding of Isaac: Rebirth Review

All poo, all the time.

It's creepy, blasphemous, and obsessed with poo. Despite all that, good luck walking away from The Binding of Isaac: Rebirth. This remake of the scatological 2012 original from developer Edmund McMillen (best known for Super Meat Boy) doubles down on the dementia with even more surreal power-ups and bizarre enemies. I still don't know exactly what I've been playing for the last six or seven hours non-stop, but I know that I liked it and that I want to go back for more.

Actually, Rebirth is easy to categorize on the surface. The game is a basic roguelike, with tips of the hat to the frenzied combat in Robotron. The feel is decidedly old-school in that the top-down maps are randomly generated and you have to plow through the entire game in one sitting (so don't die, or you're going right back to the beginning). If you've ever played a classic arcade game, you know the drill. You run around constantly, shoot everything that moves, and grab power-ups. Repeat through each level until you kill the end boss or die and start all over again a little bit older and little bit wiser.

But that stock description sells the game short. From here, things get strange. Really strange. Instead of the usual warrior elf or whatever, you play a little boy named Isaac. Sound kind of sweet? It isn't. Isaac is on the run from his mother, who has some kind of prophecy/mental meltdown in the stick-figure opening cinematic and tries to kill her son on the orders of God. Apparently, taking away the kid's Game Boy and toys isn't enough for old Jehovah, who insists on mom doing the Abraham thing and sacrificing her son to prove her love. Just before mom bursts into Isaac's bedroom with a butcher knife, though, he escapes down a hatchway into a creepy basement, and the game is on.

So if you've spent time in a cult or have any sort of mother issues, you might want to close your eyes during the intro video. And maybe later on, too. Finishing each level earns the questionable reward of a new cinematic, which always features some horrific nightmare like other kids pooping on Isaac, his mother constantly kicking him away, him falling to his death, and someone handing him a gift box filled with (what else?) poop. The game also continually ventures back into strange Christian references. Isaac seems pulled between good and evil. At times, the game veers toward the Satanic, with various demonic options and power-ups. At other times, it shows an internal struggle as Isaac takes on various doppelganger foes representing deadly sins like sloth and envy. The game always goes out of its way to be unique and maybe make you think that it has a deeper message, even when it almost certainly doesn't.

It's creepy, blasphemous, and obsessed with poo. Despite all that, good luck walking away from The Binding of Isaac: Rebirth.

McMillen really brings the weird when the game gets rolling. Isaac's health is tracked with hearts (you start with just three, and new ones are few and far between in the game), and his only weapon is his tears, which form into watery bullets. The basement and cave levels below the house are disturbingly filled with big piles of swirly cartoon poop (that comes in all shapes, sizes, and colors) and poop-related monsters like anthropomorphic piles of crap that fling smaller piles of crap at you and all sorts of related creepy crawlies likes flies, spiders, slugs, and so forth, along with demon spawn like animated dead babies (that frequently explode when killed, spraying bloody viscera all over the place). Power-ups are equally loony-tunes. There are hundreds of these goodies in the game, some passive, some active, and all are surreal, blasphemous, or an inventively sick combination of the two. Isaac can pick up the Stigmata power-up and start shooting more powerful bloody tears. The Black Bean causes Isaac to spew toxic fart clouds whenever he is attacked. A Placenta boosts health. The severed heads of various pets provide all kinds of buffs, as do Tarot cards, evil books, and so forth. Cancer gives you -- ah, I don't even know or want to know. It was enough for me to see Isaac shout, "Yay, cancer!" when he picked it up.

At first, it's hard to know what to think of all this. I alternated between nervous laughter and being sort of grossed out. Then the game took over, and suddenly the idea of whistling poop boss monsters didn't seem all that crazy. Beyond all the insanity, Rebirth is a fantastic arcade shooter. Combat speed, a variety of enemies, and alternating types of rooms keep you off-kilter just enough so that the game never gets repetitive. One moment, you're taking on blackened babies in a huge cavern, and the next, you're dealing with poisonous slugs in a cramped room loaded with obstacles.

Levels also hit you with optional challenges, like rooms that can only be opened with keys, dangerous rooms with toothy doors, shops where you can buy items, special rooms like an arcade where you can play games to try to earn items, and much more. You also have to make tough calls at times. Hmm, I'm down to just one heart. Do I take a chance on battling the end boss in that room up ahead right now? Or do I go back and explore some other chambers I skipped earlier and hope I can avoid enough damage to pick up some hearts? With the threat of permadeath always looming, you have to spend at least a little time thinking about the best ways to move forward.

The visuals are also disturbing in that they blend an innocent, pixelated design more fitting to a cheerful eight-bit console game than something this twisted. The look of the game makes you expect something kid-friendly and G-rated, to the point where I couldn't quite believe that these graphics were being used to show bloody trails behind a little kid and the exploded remains of evil babies. The audio is almost as catchy as the gameplay, with the most distinctive part of it being the 80s hair metal score that sounds like it was concocted during a collaboration between Cinderella and Iron Maiden.

Come for the brilliantly designed shooter action; stay for the poo. The Binding of Isaac: Rebirth may first catch your attention with its insane setting, surreal monsters, and irreverent references to Christianity, but the speedy, varied gameplay and seemingly neverending new features (which include multiple endings and new bosses after you take out mom the first time, so the replay value is nearly infinite) are what keep you coming back for more. And more. And more. 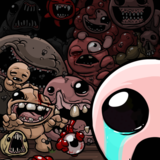 The Binding of Isaac: Rebirth
Follow
$24.88 on Walmart
Buy

Brett Todd confronted poo in all of its insidious guises for about seven hours in the course of writing this The Binding of Isaac: Rebirth review. 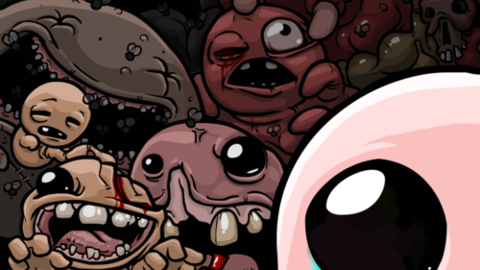 The Binding of Isaac: Rebirth

The Binding of Isaac: Rebirth is a remake based on the original Flash game.

8.5
Sign In to rate The Binding of Isaac: Rebirth