Stellar presentation and vocal harmonies help make The Beatles: Rock Band something special in the world of music games.

It has been just under two years since Rock Band ushered in the era of full-band rhythm games. Subsequent games have refined the formula, offering increased accessibility, new songs, and sharper visuals, but they all still rest on the same basic appeal: it's a lot of fun to rock out, especially with your friends. The Beatles: Rock Band stands out from its peers because it magnifies this basic appeal by better channeling the excitement and camaraderie of being in an actual band. The all-Beatles songlist creates a strong sense of continuity between songs, yet it is musically diverse enough to keep things lively and varied. Follow the Beatles' career in the excellent Story mode, and you'll unlock a bevy of photographs and videos that give you an endearingly human look at the larger-than-life stars. These bonuses, along with the beautifully creative artistic design, help you identify with the Fab Four and engender a sense of unity within your own band. When you have a few members singing in harmony, the bonds grow even stronger and you have that much more fun. While it may not have all the bells and whistles of other music games, The Beatles: Rock Band brings you and your bandmates together in joyful musical partnership and makes your living room rock sessions uniquely rewarding and entertaining.

From the first moments you fire up The Beatles: Rock Band, it's clear this is a different breed of music game. You are treated to a lengthy animated video that charts the arc of the Beatles' career both musically and artistically, connecting you to the world you are about to dive into. Throughout the Story mode this connection to the band is reinforced as you play in iconic venues, from the small, raucous Cavern Club, to the massive, screaming Shea Stadium, to the intimate, introspective Abbey Road studios. Stylish cutscenes bridge the different chapters in Story mode, and unlockable photos and movies provide interesting snippets from the Beatles' career. Whether you are a Beatles scholar or can't even name all the band members, these bonuses help draw you into the experience by showing you a more casual side of the superstars themselves. A video of the guys playing with headphones and a boom mic on their first trip to the US offers a quirky glimpse of the youthful energy that suffused their early songs, while the background studio noise that precedes their later songs gives you a window into their more mellow mind-set.

Every song has a unique video to accompany it that reflects the song's themes and its place in the Beatles' career. The bouncy energy of "Paperback Writer" is mirrored by the animated Paul McCartney's brisk strumming and singing in front of thousands of screaming fans, while the whimsical "Octopus's Garden" video transports the boys to the ocean floor, where big colorful lyrics appear all around them. This intertwining of music and art is unmatched by any other game in the genre, and it makes the game a lot more fun for players and spectators alike. You will actually want to look at what's going on behind your note highway, not only because it looks great, but also because it adds a new dimension to your own performance. The artistic elements complement the music beautifully, and the game looks great on every console.

The gameplay elements are very similar to those of Rock Band 2, with a few notable differences. Gone are the sweet freestyle drum fills and end-of-song jam sessions; you can only play the music as it was recorded. Almost all of the songs are immediately available in Quickplay mode, and the one exception is unlocked by completing Story mode. There is no character creation, and you can't customize your band's appearance because you always play as the Beatles. Songs you have downloaded for previous Rock Band games are not compatible here, and you will probably find that some of your favorite Beatles songs are missing from the songlist, though there are at least three full Beatles albums planned for future downloadable release. There are cooperative and competitive online modes, but, like any Rock Band game, The Beatles: Rock Band really shines when played locally.

The most significant new gameplay feature is vocal harmonies. Every song in the game contains one, two, or three vocal tracks, and before playing you choose your vocal style, either "solo" or "harmonies." Harmony parts are displayed in the same area as the lead vocals. Harmony parts are orange and red bars, and the lead part is blue; harmony lyrics are displayed on the top of the note highway, and lead lyrics are on the bottom. The display does a good job of visually differentiating the parts, but it's up to you to sing them. Folks who like to sing along to Beatles songs will have little trouble with the lead vocal parts, and many of the harmonies are easily identifiable. Some are so clear that your lead singer might naturally jump up to the harmony part in a certain section. It doesn't matter which microphone is receiving which vocal part; as long as you have all the parts covered, your score won't suffer. If you are having trouble picking out a harmony or staying on your part, Practice mode is a great place to sort things out. You can highlight the part you want to learn by assigning a guide pitch to play that part, and then you can drop the pitch out to make sure you've got it.

Practice mode is great for experienced and only-in-the-shower singers alike, and even if you are a shy singer, The Beatles: Rock Band is a fun, encouraging place to overcome your reluctance. With up to three vocalists, a guitarist, a bassist, and a drummer available, you can have six players in your band for the first time in a music game. The added members make your sessions more rockin', and the three-part vocals are a great way to get instrument-averse friends to join. Having multiple vocalists takes the pressure off of individual performance, because they are essentially teaming up to play one instrument (vocals). This creates a feeling of unity that spreads to the other players and makes your band camaraderie stronger. One of the best ways to capitalize on vocal harmonies is to get a few mic stands and then have band members play an instrument and sing at the same time. You can do this with other Rock Band games, but it's more thrilling when you're playing Beatles songs because you share the vocal part with your bandmates. Belting out a solo while playing guitar is great fun, but having your drummer join you on a harmony part is a whole different kind of awesome. Strumming, drumming, and singing just like John, Paul, George, and Ringo used to do is an absolute blast and is one of the richest music game experiences to date.

To a certain extent, this game is great because Beatles music is great. The Beatles: Rock Band is packed to the gills with excellent songs, but its real genius is the way it captures the excitement of playing in a cohesive band. Following the arc of the Beatles' career wouldn't be as engaging without the interesting bonuses and the stunning art design that so elegantly complements the music. Vocal harmonies add an invigorating new dimension to the gameplay, encouraging you to either get more people involved or challenge yourself to be all the rockstar you can be. The Beatles: Rock Band doesn't just let you play the music of one of the greatest bands in history; it knits your band closer together so that you can better experience the camaraderie and excitement of playing in a unified, talented group. This makes any Beatles session great fun and makes The Beatles: Rock Band something special in the world of plastic living room rock. 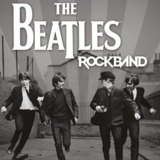