An axe to grind.

A caravan of men and giants crosses the land. These colorfully clothed warriors cut a striking silhouette against the bleak, frozen landscape. Snowflakes waft by and craggy mountains stretch across the horizon. These travelers seem so small, so insignificant, when viewed against the chilled backdrop. The caravan encounters a troop of thieves and must reach a decision: invite the thieves to join the roving party in the hopes they might bolster the defenses, or send them away out of fear, assuming they will steal precious supplies. In The Banner Saga, you face these kinds of decisions all through the game's 10-hour campaign, making choices, and then clenching your jaw and hoping your trust was properly placed. Sometimes it is, and sometimes it isn't. Sometimes, you feel in control of your destiny, and sometimes you feel like your destiny is at the whim of the elements.

Making decisions with unclear consequences is The Banner Saga's main thrust. You spend most of your time watching several expeditions of men and giants cross the frigid Scandinavian landscape and rest in the villages and encampments they encounter. The automated journey is interrupted frequently with events that require your input. A woman has been murdered, and her mother blames another traveler. Do you support the accuser, do you support the accused, or do you dig deeper into the conflict? An obnoxious general questions your leadership and threatens to run off into the wilderness with his own men. Do you argue for him to stay? Do you send him away, thinking that perhaps he might return and grovel for mercy later? You can't presume anything. Kindness can lead to disaster. Harshness can lead to triumph. All you can do is follow your instincts, apply some logical reasoning, and hope for the best.

This is an intriguing approach to strategy and storytelling, and it often works. Each day spent hiking uses up supplies; should you run out, you start losing clansmen, warriors, or giantlike varl to famine. Furthermore, the resource called renown, which you use to purchase more supplies in the towns you visit, is the same you use to promote your heroes, whom you lead into turn-based battle. At one point, I ran out of supplies, and watched in sadness as the game informed me of my losses. My best intentions led me astray, and those mistakes cost lives. It wasn't so much the loss of life that I regretted, however, but my own failures as a commander. Fewer fighters and varl meant potentially harsher battles if I couldn't order those unnamed masses to thin out the hordes of armored enemies known as the dredge before leading my heroes to victory.

The story takes an impressive number of turns based on your choices, weaving a twisted tapestry of unlikely alliances and disastrous betrayals. Repercussions might manifest immediately, or quite some time later, and it's a treat to watch larger plot points transform after your manipulations. But The Banner Saga never goes out of its way to point out its own intricacies; it allows events to simply occur, and as a result, the decision-making process feels organic, rather than game-ish and contrived. I'm eager to return again (and perhaps even again), to see how many stories I can help tell, and to plumb the depths of the game's complexities. I am often loath to return to choice-driven games, in part because I feel ownership of the narrative. In Mass Effect, I don't just play as Commander Shepard--I play as my Commander Shepard. I could have taken a different route through Heavy Rain, but the one I took was my story; playing again with different decisions would diminish the personal touch my original playthrough offered. On the one hand, The Banner Saga's diverse parade of characters kept me from feeling invested in any given individual's destiny. On the other hand, the lack of emotional connection inspires me to return so that I may pull the marionette strings differently. The Banner Saga cares less about building meaningful connections and more about testing the limits of your leadership.

That said, there are times when I wish there were a more obvious and consistent connection between my decisions and the results. And by the time it had drawn to a close, the story I had co-authored had gone off the rails. A major plot point had been almost entirely buried, and while I was moved by the ending, I was shocked when the credits rolled immediately afterward. This saga is meant to continue at a later time, but even so, the cutoff point for this chapter felt random and rather unfulfilling. A final battle brings some closure, at least, but there's no sense of narrative climax.

Sometimes, you feel in control of your destiny, and sometimes you feel like your destiny is at the whim of the elements.

Battles against the dredge occur on a grid, and if you've ever played a turn-based strategy game, you'll be immediately familiar with the basics. Before combat begins, you must consider which heroes to bring to battle. Choose wisely: different heroes have different special abilities, and if they haven't recovered from the previous battle, they're less effective in this one. In fact, choosing whether to rest in villages prior to travel is an additional consideration, given that rested heroes are more powerful on the battlefield, but resting uses up a day's worth of supplies. Once you reach the battlefield, you must pay attention to armor values as well as health values. Furthermore, you must conserve and spend a resource called willpower wisely, because it affords you extra attack power and movement opportunities. Moment to moment, The Banner Saga's skirmishes are much like those in similar battle systems, but a rock-solid interface and varied abilities that reward clever positioning keep the combat compelling, though it's rarely overtly challenging until you near the game's final hour.

Even more compelling is The Banner Saga's atmosphere. The colorful hand-drawn characters and cel-shaded villages would have been at home in a high-budget animated film. And the sight of your caravan stretching across the screen, with the yellow banner flying from an oxcart and the horned varl trudging wearily onward, reinforces the viciousness of the elements. An excellent soundtrack echoes the story's touchstones of personal sacrifice and stubbornness with discordant trumpets that sound out troubled fanfares, signaling heroism under duress. The Banner Saga is a beautiful game, filled with interesting ideas and enjoyable battles. It's too bad the story gets entangled within its own winding web, but this chilly journey does a fine job of reminding you that being a respectable leader is about more than just giving rousing speeches and schmoozing with the high and mighty.

View Comments (116)
Back To Top
7
Good
About GameSpot Reviews 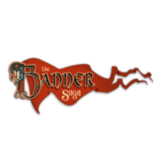 Kevin VanOrd enjoys leading giant armies to victory almost as much as he likes making difficult choices. He spent about 12 hours with The Banner Saga, finishing the campaign and tinkering with various decisions and their repercussions.