A strong sense of deja vu and poorly balanced combat loom over The Baconing, but smart puzzles and humorous dialogue entertain throughout.

There's an area in The Baconing that's influenced by tomorrow's possibilities. In this distorted vision of the future, human clones make up the majority of the population. But the science of copying people has not yet been perfected, so these mindless beings have sprouted appendages from their torsos in a gross parody of proper anatomy. It's not a pretty sight. The Baconing itself is a clone of the previous games in the series, and it also suffers from a few grotesqueries. Combat was a complement to the gung-ho adventuring in earlier games, but it has now been placed at the forefront with mixed results. The added difficulty often distracts from the fundamental joy of exploring this off-kilter land, resulting in an experience that often frustrates rather than endears. Thankfully, the tenets have been kept intact, so you can safely enjoy the humorous proceedings and delightful visuals that previous games have showcased. The Baconing is still a pleasant trip through a crazy world, but it fails to fully replicate what made the first two games so irresistible.

A man is certainly allowed to own as many thongs as he desires, but he should never wear more than one at a time. DeathSpank, unaware of this important rule, flaunted his revealing underwear to disastrous results. His spunk awakened a terrible beast known as the anti-Spank, which puts you once again in the position of a peace-seeking hero. Bacon serves as the life-saving meat that helps you rid the land of evil. The grease fires that normally cause such fear are now the very thing you must use to burn your banana hammocks into oblivion. Though bacon never surfaces in its edible form, your quest for porcine flames is a constant comedic presence. Disaster by thong fits beautifully into the goofy world of DeathSpank, and the irreverent characters you meet throughout his adventure do a great job of pushing you along to see what preposterous ideas will spurt from their mouths next. Many of the best characters return from previous outings, and a few memorable new ones fit right in, so you'll want to talk to everyone, if for no other reason than to smile at their silliness.

The original DeathSpank and its follow-up DeathSpank: Thongs of Virtue were whimsy-focused, action role-playing games, and The Baconing picks up right where they ended. Comedic narration paints a tongue-in-cheek picture of this bizarre world, and goofy events ensure you stay invested in DeathSpank's latest quest. You do have to get your hands dirty if you're going to snuff out the evil flame that threatens to engulf this fair land. There's a strong emphasis on combat in The Baconing, and the fundamentals are mostly unchanged from the previous games. Four melee and long-range weapons are equipped at one time, and you use these, in conjunction with potions, grenades, or magic items, to stomp your foes into the ground. There's little strategic depth in these pummeling forays. Slashing away with your weapons while occasionally blocking incoming blows is about as deep as things go, which makes for a pleasant, though hardly exciting, combat system.

Problems arise when long-range attackers enter the fray. Archers, magicians, and other cowardly beasts serve as your fiendish tormentors, and they turn the simple combat into aggravation. Health replenishment is the main source of the problem. In The Baconing, you consume edibles to refill lost energy, and it takes a few seconds of masticating before you get their full effect. If you are attacked during this process or push any button on the controller, you immediately stop eating. This is fine and dandy when you're swarmed by melee minions because you can usually run away to a secluded spot for a few seconds. But when fireballs and arrows are whizzing by your head and you can neither run away nor block, you end up dying in a way no proper hero should have to endure. When you combine this unbalanced situation with the frequent difficulty spikes (especially during the extended boss fights), you have a game that too often focuses on its weaker elements. To get the most out of The Baconing, you should play on the easy difficulty to avoid these combat problems so you can just enjoy the comedic bits.

Thanks to the diversity of quests, you won't have to fight waves of enemies to clear every mission. Sometimes, you have to use your noggin to move forward, and that's when The Baconing is at its best. In one such mission, an obstinate tribal leader refuses to relinquish the symbolic stick that allows him to speak freely while his underlings keep their traps shut. To wrestle this item away from him, you need to turn his mind into malleable mush. Concocting a bewitching brew by messing around in your inventory is a lot of fun, and it conjures fond memories of item manipulation from classic graphical adventure games. In another mission, you need to cross a maze of colored bridges using special keycards. In this devious puzzle sequence, you need to perform an action previously unseen in the series, and when you finally have that eureka moment, it's hard to contain your brainy glee. There are enough of these scenarios to keep you engaged beyond the whimsical story; thus, the frequently annoying combat doesn't entirely consume the good aspects

Unfortunately, The Baconing does have two major strikes against it. Poorly balanced combat often makes you partake in tedious activities that lead to frustration rather than exhilaration. But the larger problem is that DeathSpank's latest adventure is just too similar to his previous offerings. For anyone who has played through the other downloadable efforts, there is a constant sense that you've done all this before, even though the jokes and environments are different. Because of this familiarity, the novel sheen that helped make earlier games so endearing has worn off to some extent, and the lows are more noticeable than before. This is still a fine effort, though, and there's even a handy local two-player mode to help you move past the overly long combat sequences much faster. The Baconing is a slightly deformed version of its predecessors, but there's enough merry fun here to satisfy those hungry for another thong-fueled quest. 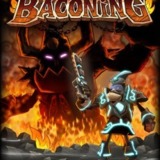 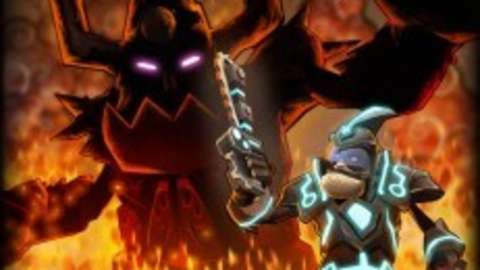 DeathSpank returns in the sequel DeathSpank: The Baconing.