Virtual reality works best when games utilize it in ways that are inherently unique to the technology. Still, plenty of developers shoehorn games into VR that fail to live up to the technology's potential. Unfortunately, The Assembly falls into this category.

The Assembly is a first-person adventure game that throws you into the deep end of an ongoing story. A group of underground scientists--the titular Assembly--conduct experiments without the government standing over its shoulder. You take on the role of two different scientists: new recruit Madeleine Stone, and Caleb Pearson, a veteran looking for a way out. These characters only come into contact with each other for a brief period of time; otherwise, their stories are separate.

Stone, a scientist whose career was recently ruined, is undergoing trials to see if she's fit to join The Assembly. These trials will, at times, involve simple tasks like moving blocks around or choosing the right shapes. Other puzzles, however, expect you to move around the environment to inspect various objects, listen to audio tapes, or use in-game terminals to gleen information. These trials can be compelling; investigating a simulated murder to uncover the culprit is an unexpected-yet-captivating twist. Some of these quests push Stone to confront her past, though the game doesn't offer you enough of a chance to care about the character before it throws you into her troubled family history. This makes the choices feel less impactful than they should.

Pearson, on the other hand, discovers that The Assembly is creating something sinister based on his past research, which prompts him to take all the evidence he can find to expose the organization. His path is definitely the more interesting of the two and makes The Assembly feel like a dystopian society, where "The Man" is always watching. You travel through the facilities, identifying evidence and solving simple puzzles. Pearson will talk to himself, letting you know what you need to find or do. His story goes in some intriguing directions, but it seems to stop short just as you start to get engaged.

Unfortunately, neither story feels climactic in any way. It's more like you're looking in on a day in the life of the secretive scientific organization. This makes the narrative feel aimless and unsatisfying, despite the promising premise. With a bit more time, fleshing out, and room to breathe, this tale could’ve been a lot more intriguing. Some characters are introduced with little to no explanation as to who they are, and The Assembly would tell a much more entertaining, effective tale if you were allowed to spend more time learning about the world before arriving at story beats. As it is, the story is delivered at a pace that feels like it works against itself, making it hard to care about the game's events.

You experience The Assembly through a VR headset or playing it on a screen. I tried both, and the experience felt better outside of VR. I felt motion-sick in VR a couple times, specifically when moving through the facility on a wheelchair-like device or using an elevator. This problem didn't occur outside of these sequences, however, as you can travel through the world by teleporting from one spot to another. Teleporting in VR gets tiresome, though, especially when you're trying to find the optimal spot to look at a specific object in the environment. Stone's trials are much easier to accomplish outside of VR, since you can move faster and look around more easily with the analog sticks. If you can handle the locomotion, you can use the analog sticks to move in VR.

Viewing The Assembly's world through a VR headset won't enhance the experience, either. The most it offers is the chance to move around its environment, which doesn't feel like enough of an incentive to jump into an Oculus Rift. It doesn't feel like you're living in the world. Stone and Pearson's disembodied voices come from what’s supposed to be your virtual body, which makes you feel even more disconnected from the game. Elements like these, coupled with the non-optimal control experience, make it difficult to recommend playing The Assembly in VR.

The Assembly feels like a small part of a bigger, much more engaging game. It's a good foundation for a world full of mystery, but it ends just as it starts to get interesting. A game that fully explores the dystopian facility, its history, and the state of the outside world is something I'd be interested in. However, as it is, The Assembly is hard to recommend. 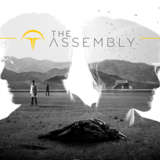 Mat completed The Assembly in around four hours. He played the game inside and out of virtual reality and saw both endings. GameSpot was provided with a copy of the game for the purpose of this review.