Rock opera and space opera meet for some artful escapism.

The Artful Escape is a visual treat--a platforming journey that takes players on a journey from Earth to the galaxies beyond and renders every location with gorgeous care. Evoking a variety of influences, from the artist Charlie Immer to the bright aesthetics of Lisa Frank, The Artful Escape captures the sheer cinematic thrill of watching your helicopter explode in a Call of Duty mission or falling off a cliff in a Naughty Dog set-piece, but transplants the action to a voyage that goes far beyond the realm of the real. It’s gentler, too, telling a story about learning how to be who you really are, and not who someone else expects you to be. There’s no violence to be found here; just easygoing platforming, low-pressure musical riffing, and adventure gaming that goes heavy on the dialogue and omits the puzzles entirely.

As the game begins, you are Francis Vendetti, a teen in a leather jacket, chunky boots, and eyewear that could be steampunk goggles or the perfect circle glasses that John Lennon made iconic. Francis is sitting on a bench on a cliff and the first prompt we see instructs us “To strum a folk ballad about the toil of a miner’s life, hold X.” It’s immediately pretentious, and that’s intentional. Francis is the nephew of Johnson Vendetti, who is a legend in the world of The Artful Escape. In Calypso, the small town where Francis has lived his whole life, his uncle is a hometown boy who made good. But “Press X to sing about miners” is not who Francis is at all. It rings hollow (and it should) because Francis is attempting to be someone he isn’t. But his first performance as a musician is scheduled for tomorrow, and Francis will be expected to perform that false identity for everyone he knows. Francis will grow as a character over The Artful Escape’s six-hour runtime, but this gameplay will remain the same. You spend a lot of time in this game holding X to strum on your guitar.

Then Francis meets Violetta, a punky girl with a bad attitude and an Edna Mode haircut. Violetta seems to see something in Francis and tells him to seek out Lightman's--ostensibly a store in Calypso. But Francis has lived in Calypso his whole life and knows there’s no such place. Doesn’t matter--Violetta is off and Francis heads home to get some sleep before his concert the next day. It turns out Francis didn’t need to find Lightman’s. Instead, Lightman, an aging musician voiced by Carl Weathers, comes to him, taking Francis to a spaceship called The Lung and sweeping him up in an intergalactic voyage. He promises Francis will be back in time to play his concert.

When Francis leaves Earth behind he leaves folk music behind, too. In space, he can be someone else, someone new, and hopefully, someone closer to who he really is. This journey takes the younger Vendetti to a variety of planets with just as many environments which he will platform across, bouncing off unidentifiable launching pads and reaching improbable heights. All the while, you can strum on Francis’ guitar, shredding out piercing solos that feel right at home in the alien landscapes. Levels often conclude with you Simon Says-ing out a guitar solo by following the lead of an alien creature. This is all exhilarating and part of the reason it works is that The Artful Escape takes its time starting off. We see Calypso, we see the flyers for Francis’ concert that feature a huge picture of his uncle and a stamp-sized picture of him, and we hear how the other people in town talk to him, how they relate to him not as himself, but as someone who matters only inasmuch as he shares a family tree with someone who matters.

This story works well, but it mostly succeeds in spite of The Artful Escape’s dialogue. Francis, and many of the alien creatures he meets on his journey, speak in strange metaphors that aim for artful but end up hitting hackneyed. Most of this dialogue is spoken once Francis leaves Earth, so it seems that the intent is to highlight the difference of this strange world in the way the characters speak. That’s a fine goal! But you can only choose between dialogue options describing something as “like a record playing in a dream-room” or “like clinging to a re-entry ramjet” so many times before it all begins to feel like a performative quirk.

The art here is brilliant, though, and it’s the star of the show. It most reminds me of the work of Charlie Immer, an artist who makes colorful paintings where the shiny roundness of everything helps you overlook how gruesome it all really is. The Artful Escape isn’t at all violent, as Immer's work is, but it shares his infatuation with gleaming colors and soft edges. I’ve rarely played a game that committed so thoroughly to putting its aesthetic front and center. Developer Beethoven & Dinosaur have worked overtime to ensure that nothing distracts from how beautiful the art is, how strange the designs, and how soaring the set pieces are. Whether The Artful Escape is summoning the cozy greenery of a temperate forest you could see on our world, or inventing gleaming alien cities, the environments are stunning. I like this approach because The Artful Escape is willing to commit to a distinct aesthetic, but is unwilling to alienate players by making anything too difficult. You may like or dislike this game, but it will almost certainly be on the basis of whether you click with its vibe, not because you bumped into any mechanical friction. You simply run and jump through these environments holding X to play your guitar, but the level around you goes absolutely gangbusters with soaring alien ships, or strange wildlife, or bizarre cosmic phenomena.

That commitment to its art style makes The Artful Escape a little difficult to talk about as a game that you play. It’s a platformer, it’s a music game, it’s an adventure game--it’s a little bit of each, but not fully any. It incorporates the vibes of all three, but it isn’t interested in, mechanically, committing to any of these genres. There are no tough puzzles, no difficult platforming challenges, and no complicated strings of notes to stretch your fingers. Instead, The Artful Escape incorporates the elements of each genre in order to emphasize the different elements of its story and the settings in which it takes place. To understand Francis’ discomfort with the expectations placed upon him, we need dialogue. To show off the wondrous locales that developer Beethoven & Dinosaur have crafted to populate this galaxy, we need the pulled-back perspective of a cinematic platformer. And, to show Francis’ musical journey, and the excellence that he has within him, we need musical gameplay, but it can’t be a real challenge. Everything is in its place here, and it feels right when you play it. But The Artful Escape can be difficult to sum up as a result.

Challenging as that may be, The Artful Escape is nevertheless a thrilling adventure that commits fully to showcasing its gorgeous art in soaring set pieces. Though some of the dialogue doesn’t work, the game is largely successful at stripping out anything that would distract from its masterful presentation. Unlike Francis Vendetti at the beginning of his journey, The Artful Escape knows exactly what it is. 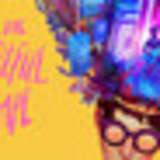 Andrew played six hours of The Artful Escape for this review. He found the vibes on offer to be very good indeed. Code was provided by the publisher. 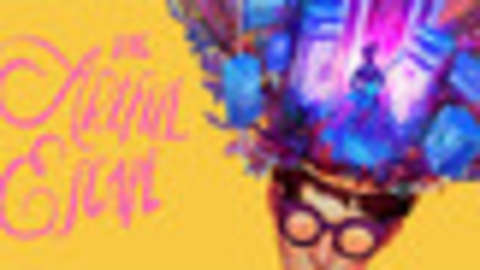 Everyone 10+
Alcohol Reference, Language, Mild Suggestive Themes, Use of Tobacco