If this haphazard collection of minigames was the best the developer could muster for an Apprentice game, The Donald may be due for a firing spree.

Opening up a PC game to find that it contains no manual of any kind is usually a good indication that you're not going to be in store for a particularly involving game. This is the case with The Apprentice, the PC game based on the titular hit reality show starring everyone's favorite New York real-estate mogul and occasionally creepy sound-byte provider, Donald Trump. Instead of a unique spin on the business tycoon genre, or even a halfway-decent minigame collection, what we get is a small series of minigames that look like they were programmed in Flash, rehash many of the same game concepts repeatedly to pad out the experience, and are universally not fun. This could have just as easily been a really lousy downloadable freeware game, were it not for The Donald's scowling mug appearing on the cover. Needless to say, Apprentice fans won't have much fun with this one.

Here's the setup. You start out by picking your gender (which barely matters, since all you see is a black outline of a person anyway) and a team name. You're then paired up with four other former Apprentice contestants--yes, they actually went and got Omarosa to lend her likeness (or, at least, a single, static shot of her) to this game. You're competing against a team of five other contestants to get hired by Mr. Trump. To do so, you'll have to run around doing the silliest of imaginable tasks.

So how do you get hired by Trump? By selling fast food as quick as you can, selling souvenirs around Manhattan's various neighborhoods, and building lamps, among other things. There are a few basic minigame concepts that you will see assorted variations of in this game. One is a Diner Dash-like game where you have to put together varying types of food orders and deliver them to waiting customers posthaste. Another is an assembly game where pieces of a three-tiered product will move along a conveyor belt in random order, and it's up to you to adjust the directions of the conveyor belt to get the pieces in the right order. Yet another asks you to buy merchandise and transport it to a part of town where you'll make a profit selling it. The last primary variety of game is a simple picture puzzle where the pieces are jumbled, and you need to assemble it correctly. So, there you have it: a collection of games that you can play better versions of for free or significantly cheaper elsewhere on the Internet. Not only are these games overly simplistic, they're just not that much fun. So why would you pay $20 for such a scant collection of lame games? Oh, right. The Donald is on the box.

There is one more game type to play if you happen to lose one of the minigame challenges. If you lose, you go to the boardroom to be grilled by Trump and his assistants. He'll ask you and two of your teammates direct questions about why you failed. Then, it's up to you to unscramble a group of letters to form a word. That word never answers The Donald's question. It's just some business term like "wealth" or "accrue." Solving the puzzle saves you and drops your opponents' respect. The opponent with the least respect at the end is fired. In this case, maybe getting fired is a blessing.

Most offensive of all, however, is how cheaply The Apprentice handles its license. This game presents itself horribly. It looks like it was programmed hastily with Macromedia, with all the characters appearing as weirdly drawn cartoon versions of themselves. The minigames all look cheesy and cheap, and visually, very little ever goes on in them. On the audio front, you do get a few choice lines of dialogue from a fairly bored-sounding Donald Trump--or maybe it's just a bad sound-alike; it's impossible to tell--but that's the extent of the audio highlights.

It's not surprising that someone would put together a dumb cash-in game based on The Apprentice. What is surprising is how wildly off the mark this game is in how much it completely misses the point of what makes the show entertaining. Not to mention that you can be over and done with everything this game has to offer in a matter of 20 minutes flat, as that's about as long as it takes to complete a single "season" of the show. In the end, The Apprentice is not merely a cheap cash-in on a license; it transcends mere cash-in into insultingly awful territory. Stay away. 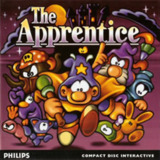