Frequently frustrating combat and an annoying central character prevent The 3rd Birthday from making the most of its unusual mechanics.

The 3rd Birthday is a follow-up to the Parasite Eve games of the late 1990s and early 2000s, but the choice not to call it Parasite Eve III is a telling one. This third-person action adventure represents something of a fresh start for the striking heroine Aya Brea. Unfortunately, Aya's characterization here is a troubling one, and while some cool concepts contribute to occasionally exhilarating gameplay, stiff controls and some infuriating battles make this struggle to save humanity as frequently frustrating as it is fun.

Aya Brea is no stranger to strange situations. She made her debut in 1997's Parasite Eve as an NYPD cop who waged turn-based battle against mitochondrial creatures that threatened Manhattan. It's been 11 years since the last Parasite Eve game was released, though, so even many who played them may have fuzzy memories of Aya's earlier adventures. But that's just as well because Aya begins The 3rd Birthday with no memory of her previous life, and both the story and the gameplay bear so little connection to the Parasite Eve games that no knowledge of them is needed to jump into this adventure.

The 3rd Birthday begins in a near-future New York that has been ravaged by creatures called Twisted. Aya Brea has been recruited by the Counter Twisted Investigation team. Her role is to use a device called the overdive system, which sends her psyche into the past. Aya's awareness is sent back to the times and places of particular Twisted attacks, where she can possess soldiers, changing the outcome of these past battles to alter the present. What starts out as a relatively straightforward tale of sci-fi action becomes increasingly outlandish, convoluted, and metaphysical. Those who like their narratives to have plots that can be easily followed and understood will be left frustrated by The 3rd Birthday's tale. Others will appreciate the way its story abandons any attempt to make literal sense in favor of more poetic explorations of themes like existence, identity, and memory, even if the stilted dialogue often sounds like something out of a bad soap opera.

However, even those who find the plot's particulars too esoteric will enjoy watching it be told. The high production values of the cutscenes make the Twisted's devastating attacks on New York City unsettling. The voice cast does as well as can be expected with the unnatural dialogue, and the score shifts adeptly between haunting and thrilling to suit the action. The levels are varied and attractive; your missions take you into the backstage area at a popular club, through a damaged skyscraper, and into an ethereal realm where bodies and urban elements like subway cars float alongside the monstrous Twisted queen. The journey ultimately culminates in a climactic battle that makes good use of a famous New York City location.

Unfortunately, the character around whom this story revolves is a frustrating one. A tale like this needs a strong hero at its center, and Aya comes across as far too weak to support the story. Aya's psyche is understandably troubled due to her amnesia and the fragments of memory that haunt her dreams, but she comes across as overly demure and weak willed rather than fragile and vulnerable. During cutscenes, she often responds to people not with words but with a tentative whimper, and when one character talks about her appearance in ways that are inappropriate and downright creepy, Aya's responses make it seem like she finds this treatment perfectly normal. Aya is one-part action hero, one-part submissive sex object (a facet that's reinforced by some of the revealing and hilariously impractical outfits you can unlock), and it's a combination that doesn't work in the game's favor. Aya's weakness also intrudes on the gameplay, where the noises she makes when she gets hit are less like those of a wounded woman and more like those of a petulant little girl who has been told she can't have any more candy.

All of the combat in The 3rd Birthday involves guns, but this isn't a shooter. With most weapons, you can lock on to targets automatically, so defeating enemies is often a matter of holding down the lock-on button and then pressing or tapping the fire button. The trick isn't hitting them so much as it is staying alive long enough to do enough damage to kill them. It's not just the many nasty, tentacled varieties of Twisted and other creatures you encounter that make surviving tricky; it's also the rigid controls. You move Aya in third person, and her casual jogging speed doesn't befit the life-and-death situations in which she finds herself, nor is it sufficient for dodging enemy projectiles and keeping you away from danger. Taking cover behind barricades shields you from some attacks and slowly restores your health, but most attacks destroy these barricades quickly, so you can't rely on cover for long. Aya can perform quick dodge rolls, though performing three in a row leaves her winded and vulnerable to attack. Controlling a character whose slow, limited movements make her extremely vulnerable often thwarts the thrills the gameplay is striving to provide.

The ability to leap from soldier to soldier is Aya's saving grace, and it's essential to survival. Aya can transfer instantly from body to body, so the death of the soldier you possess doesn't necessarily spell death for you. You can use soldiers up and abandon their husks in the final moments of their lives, provided there's another fighter on the field. Hopping around from person to person and from position to position is a fun and flashy mechanic that gives the combat a distinctive feel. This ability also has an offensive component: If you sustain an assault on an enemy for a period of time, a triangle icon will indicate that you can perform an overdive attack, sending your psyche inside it for an instant and doing significant damage. You can more effectively create openings for overdive attacks by directing any nearby soldiers to concentrate their fire at your target for a brief period. To trigger this coordinated assault, which the game calls crossfire, you need to lock on to an enemy without firing for a short while as a gauge fills. Attacking enemies fills up another gauge that, when full, enables you to enter a state called liberation. In liberation, Aya's movements are blindingly swift, and true to the state's name, it makes for a liberating departure from her normally stiff actions. Unfortunately, this state is so short lived that you barely have time to enjoy it before Aya returns to normal.

The 3rd Birthday sometimes succeeds at generating a great deal of tension. In one battle, for instance, the enemy onslaught seems overwhelming and circumstances seem hopeless. Your desperate attempts to survive are exciting, and the tension that builds up is ultimately released in an immensely satisfying way when an armored vehicle arrives, enabling you to take control of its gunner and turn the tide, making short work of the creatures that just shortly before were slaughtering soldiers left and right. It's an exhilarating moment. But often, the tension can boil over into full-blown frustration. For instance, in most situations, a steady stream of reinforcements means that even if the soldier you're currently occupying is in bad shape, surviving long enough will let you leap to another, brand new body with full health (though surviving that long is often easier said than done). But one difficult battle in a location where reinforcements can't reach you can become infuriating. The monsters you face, like many you encounter throughout the game, have a good deal of health that your attacks slowly chip away. They also have attacks that can wipe out all your health with a few hits, and your stiff movements make attempting to evade some of those attacks a frustrating endeavor. You might repeatedly find yourself nearing victory only to fail and then be faced with the prospect of starting the long, slow process of fighting them all over again. This battle, and others like it, highlight the limitations of Aya's movement and can drain all the momentum from the game. Success in these situations brings with it a sense of relief in knowing that a painful step of your journey is over, rather than a rewarding sense of victory.

As you advance from mission to mission, you earn experience and level up, increasing Aya's health and the power of her overdive attack. Additionally, frequent use of a specific type of weapon--handguns, assault rifles, or shotguns, for instance--gives you access to better weapons and weapon components of that type. You can purchase and equip components that improve a weapon's accuracy and capacity, as well as choose between ammo that does more damage but triggers overdive attack opportunities less frequently and ammo with the opposite characteristics. You also collect items called OE chips, which you can equip to grant Aya various benefits, such as increased defense and stronger crossfire attacks. These customization options aren't very deep or involving, but tinkering with Aya's weapons and attributes makes for a pleasant little diversion between missions.

Like its protagonist, The 3rd Birthday is beautiful and troubled, flawed and fascinating and frustrating. In addition, it's short; the irritating difficulty of some sections means that its six episodes may take a while to complete, but that issue aside, the adventure is roughly five hours long. Cheat codes that unlock as you finish the game and accomplish certain tasks let you replay the game with enhanced abilities, though this certainly isn't enough of an incentive to complete the game the whopping 10 times you'd need to unlock one of the cheat codes. The 3rd Birthday has an intriguing story with an annoying heroine and unusual gameplay that makes for an occasionally thrilling experience, which is often undermined by stiff controls and frustrating difficulty. Some will find enduring the flaws a tolerable price to pay to experience Aya Brea's strange journey, but she has some serious growing up to do before her next birthday rolls around. 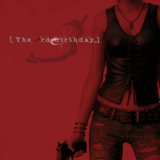