The father, son, and the holy spirit.

Spoiler warning: This review discusses plot elements that may be considered spoilers.

There’s a section of That Dragon Cancer where Amy and Ryan Green, the game’s creators and lead characters, have to tell their two older sons exactly what’s happening to their baby brother Joel. The most straightforward answer to that question is one no child--really no parent--should ever have to hear: Joel is diagnosed at a year old with a merciless form of brain cancer, and given less than a year to live. This is not the story Amy and Ryan tell their other children.

The tale they tell is a bedtime story, recorded, and given life in That Dragon, Cancer as a pixelated Ghosts n’ Goblins riff; Joel is a brave knight who shoots enemies with spears. At the start, he's bound to succeed in his quest because of divine grace, the light of God helping him out, eventually forced to do battle with a physical manifestation of the titular dragon, cancer incarnate. The battle stops dead, however, when one of the boys mentions a neighbor who also died of cancer, and asks, in that guileless way only children can, where the neighbor’s grace was when that neighbor died. Amy answers that: sometimes, the grace manifests when the brave knight doesn’t have to fight anymore, and they can rest.

More than it is any sort of game with a victory-state, or a satisfying climax, That Dragon, Cancer is Ryan and Amy’s abstract, dream-world document of the continual search for, if not their own grace, then at least respite for themselves and their lost child. As such, it’s hard, bordering on impossible, to judge as a game in the strictest sense, even under looser Gone Home/The Beginner's Guide terms. It has no need or interest to entertain anyone who plays it. The existential terror and disorientation of the experience has no real satisfaction, just the hope that expressing it can let its creators lift the burden. There are no Achievements, no points to be gained. There is only the ability to weave and work abstractly through the pain of its creators as they did, the interactivity of the medium allowing them the freedom to craft often virtual cathedrals to stand in monument of it.

Crucially, every emotional breakthrough, every new revelation, every gut-stab of a memory in That Dragon, Cancer must be discovered, confronted, and processed, as it undoubtedly had to be in the minds of its creators as it happened. The only tools you have to do so are the ability to look around, and a single button to interact. A single button lets you hear recorded family memories, the narrated, desperate thoughts of the parents. A single button keeps Ryan from drowning in the seas of his depression, to view the endless “thank you” cards at their hospital, to experience even the sheer mundaniaty of life with a loved-one's lethal illness staring you in the eyes. In That Dragon, Cancer, coping is a gameplay mechanic. The fact that it’s difficult to do so is deliberate and appropriate. Even as rudimentary as many of the obstacles are in That Dragon, Cancer, there are still moments where the game prevents the player from moving on without struggling with the decrepit, Myst-like point-and-click-to-move control scheme. In that regard, it actually has more in common with early horror games of the medium than it does any of the “walking simulators” that have cropped up in recent years.

The miracle isn’t that Joel’s tumor goes away. It’s that, for a brief moment, Joel sleeps. The screaming nightmare is over for a night, with the knowledge that it will return. It is terrifying, and more frighteningly, it happens to millions every day.

Joel was expected to not last the year, and lasted four. It’d be so easy to call his defiance of those odds a miracle, but the game has no compunctions of bursting that bubble before it ever inflates. The scene after we hear Amy talk of grace and miracles to her children is a sequence where Joel can’t stop crying because of the pain in his head, to the point of banging his head against the crib to make it end. You have the ability to walk with him around the hospital room, to try and feed him, to give him juice that he promptly vomits up, with Ryan finally resigning to prayer and, ultimately, complete surrender to the fact the crying won’t end. The miracle isn’t that Joel’s tumor goes away. It’s that, for a brief moment, Joel sleeps. The screaming nightmare is over for a night, with the knowledge that it will return. It is terrifying, and more frighteningly, it happens to millions every day. Imagine there’s a disease that causes that level of agony to very real children. There is no physical means of stopping it, and despite Ryan’s constant pleading to God for deliverance, the Lord neither takes Joel away, nor does he give him peace in any sort of timely manner.

God plays a huge role in That Dragon, Cancer. This family is in dire need of a savior that won’t come, and it may very well depend on the player’s own relationship with God how one chooses to interpret the fact that, despite that absence, they remain hopeful. That said, there are moments where that faith is questioned, where the dissonance that comes with having faith in something that doesn’t seem to have much faith in you must be sorted out. While Amy’s faith remains true from beginning to end, Ryan’s faith seems to take the biggest hit during the game, particularly during a sequence with the detritus of his tiny life displayed as an inconsequential dot in the middle of a vast ocean, crawling with malignant, throbbing tumors.

The game never flinches from the evil of cancer, which ultimately makes the moments of happiness, as simple as they are, mean the world. The game is constructed to let players find the beaming light in less grandiose moments: finding time, even after a hard doctor’s visit, to get excited for dinner, roadtripping to California, watching Joel feed ducks at a lake, letting him ramble about how loud lions can roar, or watching his favorite cartoon on a tablet. Surrounded by immeasurable pain, the tiny details have lingered in Ryan and Amy, enough to pockmark the darkness inherent in this game with a simple, untouchable joy.

This family is in dire need of a savior that won’t come, and it may very well depend on the player’s own relationship with God how one chooses to interpret the fact that, despite that absence, they remain hopeful.

That Dragon, Cancer ends on a deliberate image; it’s an image that, at first, feels entirely unearned, schmaltzy and cute in ways that, even at its most playful, the rest of the game isn’t. In narrative terms, we see a written ending, showcasing a faith in something beyond all the death and disease that gives us all what we love most in this world. From the side of its creators, it’s a permanent place where a mother and father have distilled everything wonderful about their child. This is the only place where we truly meet Joel. Not his disease, not his limitations. Just the child they got to know, surrounded by everything he loved.

It’s virtually impossible to not bring one’s own biases into That Dragon, Cancer, because death and disease are universal. Just as it’s impossible to quantify whether the exploration of those two heavy topics is worth the time and considerable emotional energy, it’s impossible to truly quantify the immeasurable value of being able to not just forever present the best version of a person to the world, but being able to earn his presence in every way his parents did.

View Comments (856)
Back To Top
9
Superb
About GameSpot Reviews 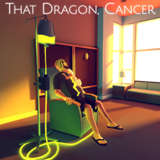 Justin Clark was able to finish That Dragon Cancer in about two hours. He WAS going to make pancakes for breakfast the next morning. Those plans have changed.