The spaceship Iktomi is three weeks away from arriving at Mars, and things are going much better than expected. The remaining crew members are of good mind and health, and the food supply is stocked just enough to get us through. I think we’re going to make it.

There are reports of a blocked passage in the maintenance bay which could cause injury to personnel if they try to fix it, but would compromise the ship's integrity if left ignored any longer. Looking at my roster, I still have one competent crew member unassigned, and by all accounts they should be able to repair the damage and be home for dinner. I send the order.

Five enormous dice roll across the outside the Iktomi’s hull--the alien nature of which I am still unsure. I hold my breath as the final die comes to rest, and then my heart drops. Four of the die have landed on the number five. I slam my desk and my colleagues give me a sideways glance.

The universe has decided that rolling a five in this random scenario means that my crew takes damage. I’ve rolled four of them. My crew member takes four hits and screams as he dies instantly. With the damage unfixed, the ship explodes. Mission Failure. I yell in disbelief and walk as far away from my computer as I can.

This is Tharsis--a turn-based roguelike that draws you in with its well-executed spacefaring theme coupled with tough strategic decision-making, but constantly makes you feel as if the universe is slapping you in the face. Tharsis’s systems of interaction are reminiscent of player-versus-game board games like Pandemic and Dead of Winter, but because of that, it makes every failure feel as if it occurs randomly through pure chance--a literal roll of the dice.

Like those board games, the number of rules, possible actions, and possible outcomes in Tharsis are staggering, and it can be difficult to get your head around the variables in the first few attempts. Each game begins with your spaceship being hit with numerous disasters during a journey to Mars. With limited resources, the goal is to prioritize these problems while keeping the ship intact and at least one crew member alive until you reach The Red Planet after a total of ten rounds.

With the exception of crew members, who are independently chosen, parameters for play are randomized. Each crew member begins in a random location, at a random state of well-being, and can have up to five actions to perform a number of activities at a single location. These actions are represented by dice. They deplete each turn unless replenished with abilities, so the effectiveness of your actions are determined by how many dice a crew member has and the numbers you roll at the beginning of each turn. Incidents occur in random ship compartments at the beginning of each turn, which will cause harm at the end of each turn and rapidly move you toward a failure state unless resolved. Each incident has a randomly generated repair number associated with it, and using dice against this number will reduce its value until the repair is eventually completed.

Dice can also be used to activate crew or ship abilities if they meet certain requirements. For example, if your crew member is in the greenhouse, they can use rolled die of the same value to generate food. If your crew member is the psychiatrist and has a die equal to or greater than five, he can use it to reduce the stress levels of everyone in his compartment. You can also put die into a persistent pool for "research," allowing for a variety of à la carte special abilities.

A rolled die can have negative effects, too. Each incident comes with penalty parameters that immediately come into effect when randomly designated numbers are rolled. They can either prevent you from re-rolling a die, injure your crew, or take your die completely out of play. These penalties can be especially devastating in high-risk situations, but the game incorporates a limited but renewable resource called Assists, which can negate up to three penalty effects each turn.

Playing Tharsis is a balancing act between maintaining the health, sanity, and action points of your crew, as well as the overall integrity of your ship, while risking everything to maintain that order. You find yourself choosing between leaving an incident alone and allowing your ship to take a hit for one turn, while you utilize a crew member to try and grow food instead. You find yourself assessing the potential risks of going into a dangerous but vital event, and working out the probability of having all your dice voided into nothingness.

There are also choose-your-own-adventure-style narrative decisions in between turns, a stress mechanic, and a cannibalism mechanic. They all come with their own positive and negative effects, adding more tough decisions to make. Do you pick the option that gives you more Assists but decreases ship integrity, or the one that gives health at the cost of action points? Do you risk the consequences of using former crew members as a food source? Tharsis makes you consider every possible outcome with each action, and this constant assessment is both mentally taxing and satisfying.

What’s not satisfying is that no matter how much you think you’ve figured out the optimal course of action, it all comes crumbling down if dice don’t roll in your favor. A round that’s going perfectly--healthy crew, well-maintained ship, and large stockpiles of resources--can instantly be ruined by one or two unfortunate rolls that kill off characters or leave them helpless.

Of course, many video game fundamentals are based on dice rolling. RPG-style damage systems are built around a roll of the dice deciding whether you hit or miss your target, for example. But the rolls in Tharsis are truly random. They are not skewed in relation to any kind of statistical attributes your crew members might have. The numbers you roll to resolve incidents are pitted directly against numbers the game has rolled in order to determine those incidents. Playing Tharsis often feels like playing a game of Yahtzee against a computer.

The unpredictability of events suits the game’s thematic conceit of surviving in an unknown, hostile environment, and its dedication to true randomness without coddling the player is admirable. But part of the reason Tharsis feels so unfair is the literal representations of dice. We see that we are on a level playing field with the game, we see that the systems are not abstracted. There is no percentage number to indicate the probability of success, just the raw data. Because the dice are constantly visible, your victories, failures, and the reality of the game’s randomness are always staring directly in your face.

This is what makes Tharsis so tough. When I completed a game of Tharsis and got my crew to Mars, I was relieved. But it wasn’t satisfying. I did not feel that I had successfully learned how the game worked and managed to overcome its trials with my own cunning. The game was not teaching me how to be better with every failure. Since the events I had to overcome were also randomly rolled, it felt like I was simply dealt a lucky hand and managed to avoid extreme anomalies in the probability formula.

The inherent problems within Tharsis’s systems of interaction are unfortunate, because the superficial package that it presents is excellent. The UI appears cluttered at first, but can tell you everything you need to know about a situation at a glance. The sparse ambient-electronica soundtrack communicates the urgent spacefaring atmosphere wonderfully. Click around the spaceship diorama and you can find hidden Hearthstone-like scene interactions. The animated crew portraits--where you can see faces wince pain when the ship takes damage, and grow wild as you feed someone human flesh--create enough empathy for you to care. This game excels in thematic design.

Tharsis creates a claustrophobic space environment I keep going back to. Each time I do, I try to approach it as a game of skill. I think about breaking a brutal difficulty ceiling, planning five turns ahead, coming to terms with the bad dice rolls, and just dealing with the terrible situations that are dealt to me. This is what surviving in space should be all about. But when I get to a turn where I have more fatal incidents than I do crew members, and rolling the lovingly-crafted dice does nothing but kill those crew members again and again, Tharsis feels like a sadistic game of chance that makes all my decisions feel completely meaningless. 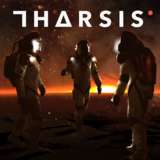 So far, Edmond Tran has played over 10 hours of Tharsis and only made it to Mars a couple of times. He loves space and hates gambling.