If you are a complete maniac for Tetris, the competition will draw you back into the game. But other gamers might find the original version more enjoyable.

Tetris is one of the most widely played games around. For the members of our readership who have been hiding in a Cold War-era bunker for the past 20 years, the premise is devastatingly simple: Drop different-shaped blocks from the top of the screen to form complete lines. When you complete a line, it disappears and you score points. Complete two, three, or four lines at once, and you score more points.

Tetris Tournament for Prizes takes that familiar gameplay and adds the primary strength of the mobile platform--connectivity--to allow you to duke it out, line by line, against other gamers. You can opt for two types of competition. In a head-to-head match you try to outscore an opponent. Each day, the player with the best winning percentage wins a prize. If direct competition isn't your thing, you can opt for a progressive tournament. In this mode, you try to score the highest point total for the day.

If you've played Blue Lava's previous Tetris release, then you've already played this version. From the background music to the graphics, the control, and the red outline showing you where a piece is doomed to end up, nothing's changed. The control is responsive, and the screen layout makes it easy to keep track of everything. Rather than simply playing until your pile of blocks grows tall enough to stop new blocks from falling, Tetris Tournament for Prizes gives you a five-minute time limit to fill 40 rows. If you clear out the rows before time's up, you score 1000 points per millisecond remaining on the timer. Your count of completed rows grows faster if you clear out more than one row at a time. For instance, completing four rows counts as filling eight rows for meeting your target. This scoring system places an emphasis on speed.

The emphasis on time gives a sharp focus to Tetris Tournament for Prizes--perhaps too sharp. There's nothing to do here but duke it out with other gamers for free movie tickets, gift certificates to Starbucks and Best Buy, and other prizes. There is no difficulty setting, and the pieces continue to drop at the same rate through the game. If you don't want to try to clear out 40 lines in five minutes at the same speed, it's back to regular Tetris for you. Admittedly, the competition can be fun, but when you see people racking up scores that are 100,000 points above yours or going on 35-0 rampages, playing one limited form of Tetris over and over again in a quest for a $10 gift card loses a bit of its appeal. The competition also feels a bit sterile. In a head-to-head match, the game reports your opponent's score once both of you have finished your game. You don't get to watch his progress, and victory feels like a random event. Regardless of your score, you might luck out and play a new player or get stuck against a Tetris master. That 300,000-point score doesn't feel so great when your opponent turns in 360,000. It is exciting to wait for the score report, but after a while it wears thin.

In essence, Tetris Tournament for Prizes suffers from the same design decisions that make it easy to pick up and jump into competitive play. Chances are that if you like Tetris, you'll keep a complete version of the game on your handset in addition to Tetris Tournament's focused offering. If you are a complete maniac for Tetris, the competition will draw you back into the game. However, other gamers might find the original version more enjoyable. 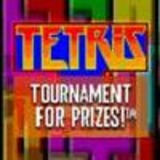