This expansive driving game offsets its faults with the pleasure of open-road cruising and a wealth of content.

Though it is dubbed "Unlimited", a developer has to be selective when making something as huge and ambitious as Test Drive Unlimited 2. In extensively re-creating the island of Ibiza for its open-world, online driving game, Eden games presumably had to give up foam parties and club-addled tourists at an early stage. The omissions are few, however. TDU2 is a smorgasbord of open-road driving, single- and multiplayer challenges, exploration, social features, car collecting, and luxury lifestyle trappings, played out on 3,000km of road modeled on the real island--and that's before you unlock Oahu, the Hawaiian island on which the first game was set. Quality, not quantity, is TDU2's occasional issue; uneven handling and visual and online hitches hold it back. But though its shortcomings are offset by the sheer wealth of content, the game's real saving grace is the combined experience: the pleasure of cruising the open road and the satisfying tick of progress through the collection, discovery, competition, and social categories.

Competition is the most structured of the game's categories, based around the Solar Crown championship: a set of classic, asphalt, and off-road contests made up of race, speed, and time trial events. In the competition events there's a stab at a story and characters--it's bland stuff, but puts a face on the racers in the other cars and sets up rivalries between you and the star driver in each class. How taxing you find the events, as with driving throughout the game, depends on your choice of vehicle handling. Full assistance is all-forgiving, hardcore is demanding, with sport mode pitched in-between, but none quite satisfy. Though the inconsistent hardcore handling is tough to master, it doesn't serve up the simulation-like experience promised, with cars feeling too light. The other handling modes are less exacting but no more convincing--less twitchy, but a not-very-happy medium between simulation and arcade racer.

But once you've mastered the quirks of your preferred setting, there's fun to be had, with bombing along dirt roads and rumbling down sloping hairpin turns a highlight. Collision physics and the limited destructibility, meanwhile, are unpredictable. Sometimes you are the irresistible force, obstacles crumpling before your mighty bumper. Other times they are the immovable object that will send you bouncing improbably away or stop you dead in you tracks--just as well, then, that vehicle damage is all cosmetic.

Besides the championship competitions, there are single-player challenges such as taxi and car delivery missions, the latter a nice opportunity to sample flashier cars before you own them. A police chase mode triggered by flagrant traffic violations turns your leisurely-though-careless drive into a frantic scramble to dodge cop cars and evade police helicopters. Multiplayer challenges include race and speed camera events, in which you compete to barrel through a set of speed traps--coming at a trap from the opposite direction and sabotaging other players' attempts is underhanded fun. Among the multiplayer co-operative events, the follow-the-leader mode comes out on top, asking a group of players to race in convoy under the leader's direction. Photography missions have you scout out locations around the island and snap them with the in-game camera under the right conditions, such as at night or with a certain car in shot, and are an entertaining diversion in contrast to the driving and racing. Yet another system makes skilful free-driving its own reward, giving you money for producing high-speed combos of drifting, dodging, and jumping. There's so much to TDU2 that it's to the game's credit that the many activities don't overwhelm. Progress funnels reassuringly into the intertwined levelling categories, and the scale of the island gives you space to breathe and find your own way.

That island (and, after level 10, Oahu island) is handsome and varied, enlivened by weather effects. Electrical storms light up the sky and slick the roads with rain. Day turns into night according to the sped-up, game-world clock accompanied by some glorious sunsets and shimmering tarmac. The beach locations, with turquoise water and palm tree-lined ocean roads, are lifted straight out of an Ibiza tourist brochure. Disappointingly, the landscapes can be troubled by items popping in at a distance, such as trees on a hilly horizon and fence posts on a long highway. Busy scenes suffer slow-down from time to time, a cardinal sin among driving games. Other driving games have more consistently impressive visuals, but despite occasional chug and pop-in, the lasting impression is of a good-looking game, largely thanks to Ibiza's beautiful scenery.

Overall progress is measured as the sum of your levels across the four categories (competition, discovery, collection, and social). Discovery relates to your exploration of the island, clocking up mileage across Ibiza's road network and unlocking new stores as you go. Collection relates to how much of everything you have bought, from cars and houses--increasingly luxurious hubs in which to hang out as your avatar and store your cars--to clothes for your avatar. In this way, discovery and collection progress go hand in hand; discovery makes more car and avatar customizations available to collect as you explore the island map, uncovering car dealerships, shops selling car stickers and upgrades, as well as hair salons and clothes stores. Through these shops, there's plenty of scope for car customization, which extends to "tuning"--upgrading a car's acceleration, speed, and braking--and decorating your car with stickers and paint jobs across the rainbow spectrum.

Avatar customization is more comprehensive still, with clothes, hair and facial surgery to modify the basic avatar you pick from a handful of models at the start of the game. You control your custom avatar inside player housing, clubhouses, shops and in the multiplayer race lobbies--a stretch of road along which the competitors' cars are lined up before an event. In avatar mode, you can gesture at other players with animated emotes such as waving, clapping, or laughing while you exchange pleasantries or trash talk over voice chat. With this many ways to personalize your car and avatar, it's a shame there's not as much choice on the car radio, with just a dance station and a rock station to tune into.

As you cruise past seaport or salt marsh, you'll find other players sharing your session, either in sight or as waypoints tagged with names. This is the basis of TDU2's much-touted massively multiplayer component. You can flash your headlights at those other players to initiate a quick race or co-driving session in which one of you rides shotgun and gives directions in lieu of the usual GPS on the mini-map. The latter is a novelty more than a compelling co-op mode, but it is fun and straightforward to spontaneously meet and challenge other players to races, and just having them in view on the same road creates the sense of what TDU2 intends: a shared, living world in which solo and multiplayer action, both ad hoc and in set multiplayer events, mingle. The integration is not seamless, though; between a clunky party system and technical problems, we found it hard maintaining a stable link with friends. The menu listing other players online or sharing your session doesn't prioritise friends, accepting an invite to join them in the game world doesn't always work, and entering and exiting modes, such as the co-driving, seemed to break the link, sending us into separate sessions.

Happily, many other social features are better executed. You can create and edit custom challenges and share them in the Community Racing Centre, or go there to pick up others' gauntlets with a shot at cash rewards. The player clubs with fancy clubhouses and shared garages are likewise neat, offering multiple membership ranks with various privileges and a useful base for seeking out multiplayer action. Both clubs and individual players have persistent, customizable profiles, with an insignia for the former and avatar headshot for the latter, letting players advertise their preferences and achievements in search of like-minded drivers. Activity in clubs, in community challenges, and with random passers-by adds to your leveling progress in the social category, the last of the four.

By the time you've hit the level 60 ceiling in the four combined categories, you will have bought a lot of cars and clothes and haircuts for your avatar, and upgraded from the trailer hovel in which you begin the game to, most likely, a lavish yacht moored in a sparkling blue marina--all funded by your winnings in the Solar Crown championship and in the single- and multiplayer challenges. The abundance of activities and collectables keep play from feeling like a grind, since there's always something different to do if you tire of one thing. TDU2's not quite got everything--it's a shame the streets are free of Ibizans, and there are no motorbikes to be had. (In addition, a corrupt Xbox 360 savefile might halt your progress, as it did ours.) Nevertheless, the freedom of open-road driving, backed by beautiful landscapes, is like few other games, and the huge, shared world of races and missions can be as addictive as a good MMORPG. The catch is that TDU2 isn't best in any class; it doesn't do any one thing better than a number of more specific, less expansive driving games. It does do an awful lot, though, and won't be kept down by its faults--which are hardly few, but aren't deal breakers either. 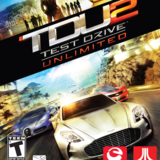